ONCE AGAIN, The Danbury News-Times allows anti-immigrant xenophobes to express their violent intentions 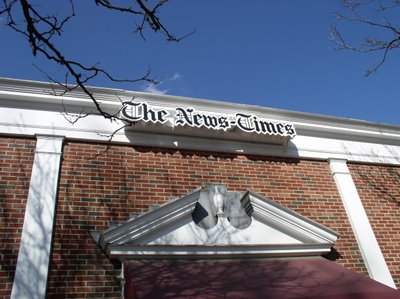 This is just ridiculous. It's about as if the News-Times supports this type of speech because this comment (and the assclown who wrote the disgusting remark) is still on the site. Read the crap in bold.

Posted by: The Plain Truth Wed, Jun 27 2007
DisNoir36, your statements and attitude make it quite obvious that you have not felt any of the repercussions/effects of the unmitigated flow of Illegals into the American work force. You must be very well insulated in your career and not need to compete against these cutthroats. Many of us on the other hand have been severely affected.

I have friends in the construction business who are now working for less than they did 20 years ago just to pay their bills. It has taken one friend, with a very busy roofing business, four years to remodel a home he bought and not in a grand style just updating the place. Why, well because; though he constantly works, he has had to reduce his prices continuously to do so. And, the Illegals still cut his throat.

I have other college educated friends mostly in the IT field who have lost their jobs to H1B Visa holders. Why because; though hundreds of thousands of new prospects are turned out of our universities every year the uber-capitalists insist that they do not have adequate candidates from which to choose within our own labor pool and have escalated the H1B program to record heights. And they are right; they do not have sufficient candidates to choose from, sufficient candidates who are willing to work for 2/3s to half of the standard salaries for these skill sets.

If as you say “Rell just perpetuated the existence of an underclass by denying them an opportunity to get quality higher education and move up…” is true; then I say good! Good let them be relegated to mowing our lawns, serving and cleaning our tables at restaurants. Why should we educate them so that they can further debase our way of life? The children of those who have come here Legally receive the benefits as they should. These others should do what it takes to become residents the right way not expect to be excepted into our society simple because they were adept at scurrying across our borders like rats or took advantage of being allowed to enter the country on a Visitors Visa to become a squatter.

And, before anybody make a crack about not choosing where they were born. Very Very Few of these kids were born there the majority of them were spirited across the border in the same manor as their parents arrived there and are just as Illegal as they are!

“I seriously wonder what will happen with all you haters if this immigration bill does pass. Somehow I doubt the hatred will simply dissipate once the question of 'legality' is removed from the equation.”

I predict violence, lots of well deserved violence. Violence; toward the Illegals and unfortunately violence toward some Legal citizens who are mistaken for Illegals. And I sincerely hope, violence against “our legislators”/government for selling out The People to the interests of the uber-capitalists and lining their pockets with the ill-gotten gains of it all.

Again, an individual who advocates violence against other people is still allowed to post on the News-Times site and the offensive remark is not pulled from the site. Forget the fact that this garbage is probably written by a whimp who would probably wet his/her pants at the sight of a gun, the fact that this jerk is still allowed to post comments, and the inciteful remark has not been pulled from the site, speaks volumes about the irresponsiblity of the local rag.

I know who this is. ctblogger, you can pull more weight with the NT than I can, believe me. It's the "Illegal and lovin it!" character. He has even admitted to being this "The Plain Truth". If you want to help crack down and help out our local newspaper during their tough times, just pay attention and point out what you see. I feel if just a FEW individuals had their IP blocked, we would see a positive change.

Okay Elizabeth (if you're still there), someone has done the research for you and I'm sure you'll do the right thing and not only disable the username, but also block this person's IP number.

We'll check throughout the day and see how long it takes for the News-Times to do the right thing...

UPDATE (3:30 P.M.): Well, it took a while but the post is FINALLY removed from the News-Times site. Let's hope that the racist that goes by the username "Illegal and lovin it/The Plain Truth" is banned from the site as well. Thanks to all who monitor hate-speech on the News-Times and help keep the local rag accountable.

UPDATE (6:30 P.M.) I was just contacted by a regular on the News-Times board who wants to set the record straight.

careful, bored...watch that extra "G" in "LOVING". I complained to no avail about someone mimicking my log in name on the NT boards and found their internet editor to be dismissive and uncooperative. (This was post-eugene and NOT Elizabeth).

I'm totally down with H.C. blog, and my daily run-ins with voice, cootie, ILLEGAL with a "G", Plain Truth, Lilee, and various other similar-minded anti-immigrant zealots speak for themselves.

To recap:
Anti-immigrant, xenophobe=ILLEGAL AND LOVING IT.

Ditto + advocating violence against immigrants whose IP number should be banned from the NT board forever=The Plain Truth
posted by ctblogger at 9:08 AM