Boughton misleads the public about Danbury's "Triple A" bond rating

Our Dictator in Chief has made it a habit to state that the city of Danbury has a "Triple A bond rating! In fact, this rant about Danbury's bond rating has replaced targeting the illegal immigrant community as his mantra…and lie his rants on immigration, when it comes to the city's rating, Boughton misleading the public YET AGAIN.

In his opening remarks at this year's mayoral debate, Boughton said the following:

Danbury bonds & credit is AAA rated (better than the state and the U.S).

What Boughton is not telling the public is that he's cherry-picking from a less-than-well known rating agency in order to push his own agenda.

In terms of bond credit rating, there are three firms that make up the "Big Three credit rating agencies), Standard and Poor's, Moody's, and Fitch Group. The S&P and Moody's and US based while Fitch is controlled by FIMALAC (a.k.a. Financière Marc de Lacharrière), a French credit rating and risk management corporation.

Here's a breakdown of the credit rating system for the big three rating firms (S&P, Fitch, and Moody's). 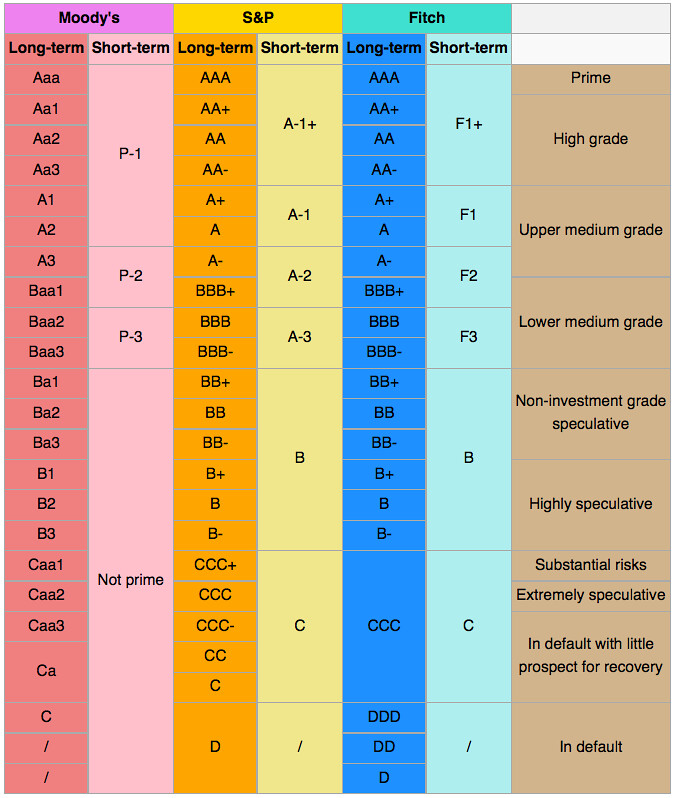 The most referenced and well known of the three agencies is the S&P, which made headlines earlier this year when it's lowered the U.S. government's rating from AAA to AA+…here's what Boughton had to say about the S&P rating at the time.

Friday night’s surprise downgrade by the credit rating agency Standard and Poor’s from “AAA” to “AA+” has hit our country in a deeply profound way – and has caused panic in the Obama Administration. This past weekend the Administration was busy trying to dispel the importance of this action – mainly because they were concerned of its impact on the economy.

But the action of the Administration misses the mark. The downgrade will be about the stock market and the economy in the short term, but in the long term the action by S&P has damaged the psyche of our country and our business community.

American exceptionalism has been questioned, and now, an independent agency, has said that we are no longer the gold standard in the world economy.

Because the of the AA+ rating, the US government is "no longer the gold standard?" What Boughton fails to inform the public is that S&P (as well as Moody's) also gave Danbury the SAME RATING.

You can view the S&P report on Danbury by clicking here and Moody's full report by clicking here.…and here's Fitch's report that Boughton referenced (click here). As you can see, only one out of three agencies (the one controlled by a company outside of the United States) gave Danbury a triple A rating while the other two out of the three agencies gave the city the lower AA+/Aa1 rating.

From the three reports, what stands out the most regarding Boughton's fiscal management is the critique from Moody's

Moody's believes that the City of Danbury will maintain its favorable financial position, given management's prudent fiscal practices and the city's commitment of maintaining unreserved General Fund balance at a minimum 5% and targeted 10% of General Fund revenues. However, inability to fully replenish fund balance appropriations has led to three consecutive years fund balance draws, In fiscal 2010, the city was able to narrow a $2.6 million operating deficit to a $906,000 draw on reserves through savings their 2010 refunding. Total ending fund balance totaled $25.4 million or 14.1% of General Fund revenues, down from its fiscal 2007 peak of $28.3 million or 15.1% of revenues.

In other words, while Moody's forecast a "favorable financial position" for the city, the agency has a problem with Boughton's use of dipping into the fund balance in order to balance the city's budget…a common practice Boughton.

What's more alarming about Moody's report is their requirement for the city to achieve a higher rating:

WHAT COULD MAKE THE RATING GO UP

The term "significant improvement in the city's financial position" doesn't sound like the rosy picture Boughton sold to the public…in fact, if anything, the report from Moody's is luke warm at best.

While there is a debate on whether a AAA or a AA bonding is significant, what's important for the residents of Danbury to understand is that ONCE AGAIN, their mayor is misleading the public for political purposes.

In closing, I'll post these remarks from a reader who's been pointing out Boughton's "Triple A bond rating" LIE for some time...

In response to the previous comment. Thank god for this blog. If not for this blog then most of the public would have no idea of the constant lies and manipulation heaped on us by the current mayor and his rubber stamp city government. He has no problem in blatantly standing up and lying to the public. Case and point he stood up in a recent debate and proclaimed we have a triple A bond rating. As a matter of fact it was the cornerstone of his accomplishments according to him. When he knows as do i and many others its just a lie. Our bond rating with two of the major rating agencies is not good at best. According to S & P the most respected of all the ratings agencies our rating is the same as Waterbury! Dont believe me look itup. it is all available here on the web. Standardandpoors dot com,Moodys dot com and fitchrating dot com. He knows this and still stands up and proclaims triple A! I wanted to jump out of my seat and scream THATS JUST A LIE!!! Now you may want to believe that this guy is for you and all the others in Danbury. The fact is he would slit your and my throat if it would get him to the next level. Al knows this and tells the truth. You dont like it read the news Times they are more then willing to keep Boughtons lies going for you the public. If you want the truth keep reading Als blogs. It is your choice.