Immigrant supporters come out in force 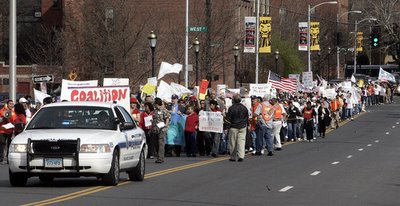 Maybe Nancy Johnson should rethink her plans to meet with an anti-immigrant hate group in Danbury. I think these people just became Chris Murphy supporters.

From Washington, D.C., to tiny Garden City, Kan., the events Monday made it clear that immigration is no longer an issue restricted to border states. Organizers of rallies in Hartford and New Haven said Monday marked a new chapter of the debate in a state with a rapidly growing population of undocumented immigrants.

Although those immigrants in the past preferred to remain in the shadows, organizers said Monday such immigrants joined activists, unions and religious groups in calling for new laws that provide a way for those here illegally to become citizens.

"Today's laws are not only anti-immigrant, today's laws are anti-American," New Haven Mayor and gubernatorial candidate John DeStefano told an estimated crowd of 2,000 on the New Haven Green.

The events yesterday in Connecticut illustrates how support there is for immigrant rights. Hopefully, the supporters can channel that energy into votes come election day.
posted by ctblogger at 2:04 PM