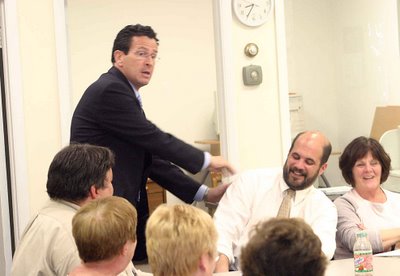 Look who just gave Dan Malloy the thumbs up.

"After 12 years of Republican rule, we have seen our state deteriorate across just about every measure -- jobs and the economy, education, transportation, health care, and the list goes on. I believe we can win the gubernatorial election by choosing a Democrat who can actually defeat the Republican regime in November. That candidate is Dan Malloy," said DaSilva. "Throughout his 20 year public service career, Dan Malloy has never lost against Republicans, in the second largest Republican stronghold in the state...With outstanding big city credentials and a socially progressive but fiscally responsible record, Dan Malloy will run well in cities and swing suburbs alike."

Let me get this straight. I live in Danbury and I had to learn about this from a press release. Good grief...I need better sources.
posted by ctblogger at 6:22 PM