Forget to share this little tidbit of info about HatCityBLOG's big brother...

Earlier this month, My Left Nutmeg received the honor from The Washington Post's Chris Cillizza as the most recommended political site in Connecticut.

After sifting through hundreds upon hundreds of recommendations that came in via the Fix comments section, Twitter and email, we are finally ready to unveil our list of the best political blogs in each of the 50 states.
[...]

• In a state where one blog was far and away the most recommended by Fix readers, we have noted it by bolding the name of the blog. In states with multiple blogs in which no one was the most mentioned, the order in which the blogs are listed is entirely random. Let us repeat: entirely random.

This is the second year in the row MLN has received top honors by the WashPost and although I own the keys to the site, this honor is more of a reflection of the entire MLN community and their dedicaiton to promoting the progressive cause.
posted by ctblogger at 9:58 AM

Quote of the week

"Budget increases in the last several years have forced us into a tight budget exacerbated by the current economic problems. The concerns I have about supporting this budget is that it has grown out of past budgets that I've opposed for these reasons."

Saadi is 100 percent correct...unfortunately, a resident would have to recall the past spedning habits of this mayor to understand what the Minority Leader is talking about...and without a source of media that will really report on City Hall activities, residents are left misinformed when it comes to how this city has spedning their taxpayer dollars.

As I stated several times this month, I'll be in a better positon to give my take on this year's budget later this week...but trust me, this budget isn't the fiscal responsible proposal that the mayor's supporters are cheerleading about.
posted by ctblogger at 9:36 AM 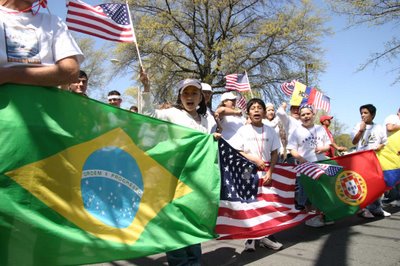 
2. When xenophobes attack! Watch as Elise Marciano's led, xenophobic, anti-immigrant whackos, such as the infamous Barbara Keidel, USCFILE Vice President John McGowan, and company make complete asses out of themselves (McGowan desecrating a Mexican flag is a special treat).


3. Comments from Maria Cinta-Lowe on the origins of May Day.


4. Comments from Franklin Pena regarding racism in Danbury. A reader emailed me and asked if I heard about a meeting the mayor was having with members of his community on Monday night (4/27) and I told that I didn't hear anything about it NOR did I see anything about it on the city's website.

Here's a snapshot of the city's meeting and community calendar for this month. Sensing that there was a problem, I obtained a copy of the weekly meeting email our lovely city clerk distributes to all the members of the Common Council. Take a look...

Notice something strange...like how a majority of the meetings Jean Natale notified members of the Common Council about ARE NOT LISTED ON THE CITY'S CALENDAR for the public!

Now, it's not like the City Clerk is responsible for posting on the city's website that have nothing to do with the Common Council but people at City Hall should make sure that they're keeping the people informed about what's happening at City Hall. Remember when Mayor Boughton jumped into the ring as a special referee and basically got his clock cleaned? Well, inspired by the my photograph of Mayor Boughton getting bitch-slapped by a shady manager, a local band put together the following flyer...and I think it's safe to say that some people in Danbury think the name of this band and the photo are a perfect match. Want to see these guys in action, then come on down to Cousin Larry's SUBROSA party tonight!
posted by ctblogger at 3:26 PM

The numbers tell a different story Last week, while covering the ribbon cutting ceremony of the new multi-multi-multi-million police station, the mayor made the following comment which made me to a double take...


BOUGHTON: ...of course, as mention my the chief, I want to thank the voters of the citizens of Danbury, who OVERWHELMINGLY supported the acquisition of this property, who understood and got the vision of what we were trying to plant here, the seed of not just a police department, but of re-development on Main Street.

This building will serve as an anchor for future re-development efforts and our voters understood that and voted twice overwhelmingly to support the construction of this facility.

...once again, the mayor is misleading the public as when it comes to the public "overwhelmingly to support the construction of this facility" based on their voting for the project, a quick look at THE ACTUAL NUMBERS tell a different story.

Today in Danbury, voters will decide if the city will get a new police station, a parking garage and an updated sewer plant. If anyone has driven past the police station on Main Street, it's obvious that the station is too small to meet the needs of the city (the police cars parked on the lawn tells the story).

"Danbury's (police) headquarters is old, out-dated and worn out," said Chief Alan Baker. "It was built in 1971 for 75 officers and right now our strength is 152."

There is very little parking space, so the lawns at the department double as parking lots.

"We have six holding cells, and we'll frequently have 11 or 12 people in lock-up after the weekend," Baker said.

The city's police officers have been giving public tours of their building during the last month to show people their working conditions.

The police portion of the bond is $33.8 million. The city's voters have already committed $2.7 million to this project, and the city is in the process of buying the land needed for a new headquarters on Main Street near East Franklin Street.

At the end of my post, I wrote the following...

...it's up to you to do your duty as citizens of Danbury and vote.

Now, lets take a look at the vote count for the 48 MILLION DOLLAR BOND PACKAGE*.

Voters voted in favor of the bond package yesterday. Here are the results.

I would HARDLY call a turnout of 1598 residents in a city where the population is over 70,000 OVERWHELMING SUPPORT for the police station. In fact, I would call it a disgrace that 1598 people are allowed to make a 48 million dollar decision which will effect the entire population for years to come.

Now, I can hear the last honest man in Danbury now saying that the embarrassingly low turnout was due to the vote not taking place during a municipal, state, or federal election. Well, lets just kill that excuse real quick by looking back at another vote that happened in 2006, received MUCH LESS PUBLICITY, and only involved one political party.

From March 10th 2006, I give you totals of the second ward Democratic town committee feud:

When you add up THOSE numbers, the total number of people who voted in the SECOND WARD comes to 1376...202 votes less than the CITYWIDE vote on the police station that took place a few months later!

Now don't get me wrong, as I stated back in '06, I think the building of the police station was long overdue as I actively supported the project on this site. What I have a SERIOUS problem with is when a mayor misleads the public with statements that sound good but are not entirely accurate...and when the media just goes along for the ride without holding Boughton accountable for his words.
posted by ctblogger at 11:37 AM

More trouble at the News-Times?

Only in Bridgeport has the latest on the financial troubles at Hearst papers...and it's not good news for the News-Times.

Greenwich, Stamford and Danbury pubs took the biggest hit in the latest round of layoffs. The larger issue in the Bridgeport newsroom is what will come down the road as a Hearst letter to employees announced another round of 80 layoffs on the horizon. It sucks to report and write with the layoff guillotine poised. Hearst owns a juicy triangle of papers in the wealthiest county in the country with a bottom line to prioritize in a languishing print media industry.

With the state of the economy being the way it is, and the rapid decline in print media readership, expect more layoffs on the horizon.

Hearts plans to eliminate another 80 positions within the next three months.

posted by ctblogger at 9:03 PM It's a new campaign season, and that means one thing...more campaign finance reports to analyze.

Download the files and let me know if you see anything that raises your eyebrow. Here's some highlights we found in the past.

• An family-owned immigrant newspaper that has donated (along with immediate family members) over 600 dollars in in-kind advertising contributions in late 2005 (NOTE: although the in-kind advertising contribution was received on 10.10.05, Boughton's campaign did not disclose the contribution until after the election against then Democratic mayoral candidate Dean Esposito on 01.10.06). The same business donated over 1,400 to Boughton during the 2007 campaign cycle (including 1,100 after the ICE ACCESS program was introduced in during the October Common Council meeting),

• Contribution from the main players who contributed to the worst episode in the history of Danbury: The James Dyer scandal of the 1980s.

Let's work together to expose the ugly truth...get to WORK!

posted by ctblogger at 3:33 PM