As a parent of a child who has just entered the school system, in speaking with parents, teachers, and students across the city, the top issue on the minds of most residents in Danbury does not involve immigration or the economy but rather the state of education in the city.

As Mayor Boughton and the City Council continue to decrease funding for education while school enrollment increases, lingering problems in the city's school system have become more profound and troublesome for school administrators. If you talk to anyone involved in the school system, when it comes to the decrease in the level of services the city provides for children, you'll get an earful of complaints regarding the school system getting short-changed over the years and the impact this lack of proper funding is having on the quality of education in Danbury.

From decreasing or eliminating numerous school programs and a decrease in proper staffing, to a lack of school supplies and space for an ever increasing school population (that was foreseen years ago), parents should be outraged at local lawmakers who for the most part turned a blind eye to the problems within the school system...all in the name of saving a buck.

Even worse, the same politicians who have short-changed our city's education system are making statements that are insulting to people's intelligence; for example, lets take a look at the nonsense spewing from the mayor's mouth when it comes to the skyrocket increase in school enrollment at Shelter Rock School. For years, the school population at Shelter Rock School in the city's fourth ward has ballooned to a point to where school officials are currently taking drastic steps to combat the projected increase in school enrollment over the next couple of years. If you take a look at the geographic area surrounding Shelter Rock School, you'll notice that for the most part, the only thing that's changed in that area is the tremendous increase in condominium development that has occurred over the last ten years.

Although simple logic would dictate that an increase in condominium development would equate to an increase in school enrollment, throughout his tenure as mayor Mark Boughton has refused the acknowledge this point. During the start of his second term as mayor, Boughton was questioned about the rise in condominium development and the impact it had on the school system…here’s what he had to say.


BOUGHTON: Condos don't equal kids, actually it's the sub-divisions that equal kids..four bedroom homes with yards because that's what families want. If you're going to spend a half a million bucks on a condominium then you have enough to spend on a house, if you have a family you want a house, you really don't want a condo.

As years past, more and more condo developments popped up in the fourth ward and during land use meetings, more and more residents in the ward expressed their concerns regarding the impact the developments would have on city services, including schools.

Fast forward to 2011 and even a blind man can see that the rise in condominium developments in the fourth ward resulted in an uncontrollable rise in student population at Shelter Rock School. While residents in the ward continue to claim that condos are at the root of the school population problem, as in the past Boughton refuses to acknowledge the obvious.

A few months ago at a public meeting held at Broadview School on overcrowding in the school system, here's what our misleading leader had to say on the topic of condo development and the increase in school enrollment at Shelter Rock School.

BOUGHTON: ”…where we’re seeing the influx of kids and the neighborhoods that they are coming from are not condominiums.

PARENT: “How do you explain the explosion in the schools then…

PARENT: “But that’s exactly what’s happening at Shelter Rock and that’s where you have all the condominiums?”

BOUGHTON: “And those kids are not coming from that general area…" Now, lets fast forward to this past Monday where I attended another meeting at Broadview on school population problems.

Since our misleading cement head of a mayor was not in attendance to offer more spin, I decided to ask a real specific question regarding the topic of condo development and school enrollment at Shelter Rock. School…and for the first time, school officials not only admitted to the obvious, that there is a direct correlation between the two items, but also that the city dropped the ball when they had the opportunity to properly address the foreseen problem.

Dr. Sal Pascerella, Superintendent of Schools: When the demographer looked at the numbers we asked that question as well. What we were told was that we would be getting the students out of there that we would be get out of a typical home. Well, that's not what has really happened, that particular area has had more students come out. The plan is what we have done, create a partner school and send those students there. We talked a little about additions, by utilizing modules but that didn't happen. The plan that we have is to simply create this partner school.

We seem to be getting students out of that one condo area, Julia is that correct? That's the area we're talking about, Julia is the principal of the there, in fact we went back there and we started walking around trying to look for bus stops there and there were students out there so I think that was miss quite frankly.

I don't know what could be done that much different with the economy being as it is, it is difficult for any city as it is and it would have taken to place these modules in and we don't see it happening at this point...so I guess on that question specifically I guess we can say that we missed that."

As you can see, unlike the spin from the mayor the people in the know, specifically the Superintendent of Schools and the Principal of Shelter Rock School, admits the obvious that residents in the Shelter Rock area have known (and what the mayor has denied) for years...that there is a clear and direct correlation in condominium development in the fourth ward at Shelter Rock School.

Unless we have honesty from elected officials when it comes to topics like school over-population under Boughton’s watch, problems in our school system will continue to persist…and our city’s children will pay the price.

Since we're in the home stretch of the municipal campaign season, I decided to bring back my CANDIDATE SPOTLIGHT series.

The first person in my series of campaign interviews is City Council At Large candidate Luis Rodriguez. Here's a brief bio on the candidate.

A recent graduate of the University of Connecticut with a degree in Economics, Luis is looking forward to making a positive impact on his hometown. He attended Danbury Public Schools from kindergarten through high school and has been active in the community as a volunteer, mentor, and patron of city businesses and organizations alike.

He is a first generation American with his parents coming from the Dominican Republic and is the youngest of 4 children. Luis graduated from the Danbury Public School System and has been a part of and active in organizations like the Danbury Young Democrats, YMCA, and the Good Friend mentoring program.

This week, I caught up with Rodriguez and talked to him about his campaign and why he's running for City Council.

For more information on Rodriguez, visit his camnpaign page on Facebook or email directly at rodril629@yahoo.com.

If you're a candidate running for office and want to be part of the campaign spotlight, contact yours truly at hatcityblog@yahoo.com
posted by ctblogger at 3:45 PM

Flip over accident causes traffic backup on Garamella and Osborne 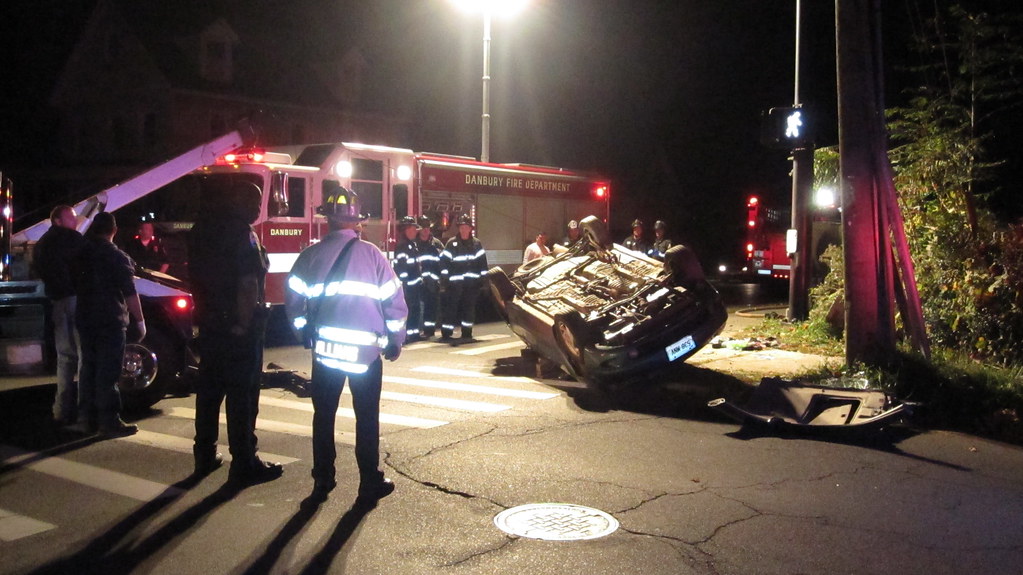 On my way through Danbury, I stumbled upon an accident on the corner of Garamella and Osborne.

Don't have many details about the accident at this time except that involved a late model Ford Escort Sport and the fire Department had to rip off the roof of the car.

During yesterday's meeting between school officials and member of the public at Boradview School, people witnessed a little bit of honesty from those in the know that directly debunked one of Mayor Boughton's most dishonest statements regarding the correlation between the skyrocket rise in condominium development under his watch and the rise in school enrollment.

Video to come...prepare to be outraged.
posted by ctblogger at 12:38 PM