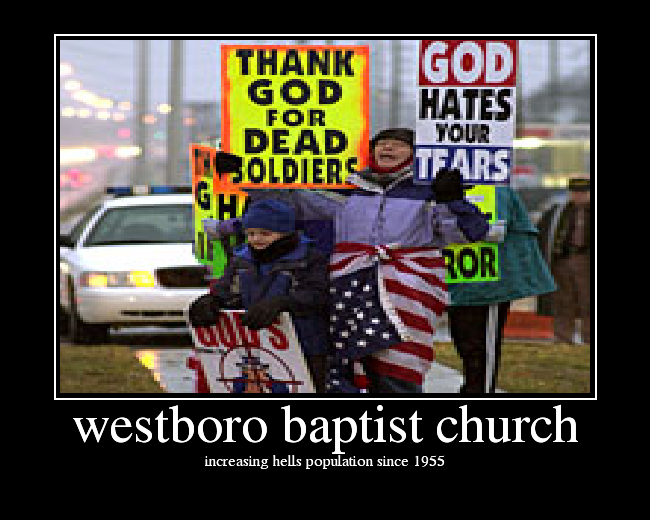 For those who don't know who anything about these anti-gay assholes or why these bigots decided to come to Brookfield today, click here for all the details.

UPDATE 8:15PM: The live video stream is over.

Well, it seems like the anti-gay hate-group morons were too scared to come out tonight...but over 100 people brave the inclement weather to show their support for the production of The Laramie Project, a play based on the murder of Matthew Shepard.

I'm FREEZING so I'll post my wrap-up on the event tomorrow. A BIG THANKS to those who came out in the rain to show their disapproval to the disgusting hate-group.

To give you a better idea of these fucking assholes, take a look at this videoclip.

posted by ctblogger at 5:46 PM

posted by ctblogger at 6:50 PM

It seems like the governor's budget chief wants to empty out Danbury's financial reserves in order to take care of the state's crisis.

State government has emptied its savings to reduce the budget deficit, and Gov. M. Jodi Rell's budget chief said this week it's time for cities and towns to do the same.

But municipal officials said their budget reserves already have been reduced to compensate for shrinking state aid. More importantly, they added, communities can't exhaust their reserves the way the state has without risking a dramatic increase in financing costs.

"Should the state borrow money so municipalities can preserve their fund balances?" Office of Policy and Management Secretary Robert L. Genuario asked Wednesday as he testified before the legislature's Appropriations Committee.

Connecticut amassed a record $1.38 billion in its emergency reserve, commonly known as the "Rainy Day Fund," between 2004 and 2008. That savings, equal to roughly 8 percent of state government's annual operating costs, now is gone. Rell and the legislature agreed last fall to use the entire reserve to shore up declining tax revenues both this fiscal year and next.

Rell's latest plan to close out this year's $518.4 million deficit relies on moving into the current budget nearly $220 million in Rainy Day Funds originally assigned to 2010-11. To help offset that switch, the governor has suggested reducing town grants by $45 million next fiscal year.

Genuario said the administration believes several non-education programs could be cut, adding that towns could cover the lost by looking within their savings accounts.

For those who are not keeping score, so far, here's the update.

As Mayor Boughton parades across the state selling his gubernatorial stump speech to any Republican Town Committee that will hear him, and with weeks until the the city council tackles the 2010-2011 budget proposal:

Mark my words, Danbury's 2010-2011 budget will be one of the most difficult to date...and these outrageous proposals from the State Capitol are going to have a detrimental impact on everyone.
posted by ctblogger at 1:20 PM As the earthquake in Haiti is slowly disappearing from our TV screens, students at the Western Connecticut Regional Adult Education program (WERACE) are doing their part in reminding people that those who were effected by the natural disaster continue to need our assistance.

Last week, I met with WERACE teacher Mara Perifdo and her students who are spearheading a care package relief effort for the victims of the earthquake.

It's important to remember that people in Haiti will continue to need our help long after their images vanish from our television screens. For more information on the WERACE's Help for Haiti program, pleace contact their office at 203.797.4731 or email at actionpower1@yahoo.com posted by ctblogger at 5:40 PM Lynn Taborsak calls for unity in her opening remarks as new chairperson of the Democratic Town Committee.
Photo by ctblogger, 03.08.10

Yesterday, inside a packed Democratic headquarters, the newly elected members of the DTC committee elected Lynn Taborsak as their chairperson.

Since the outcome of the primary, the biggest concern among area Democrats centered around whether or not former chairman Joe DaSilva would seek another term. With Warren Levy and Taborsak both indicating interest in leading the committee, DaSilva's attempt at re-election could have created a very interesting three-way race scenario.

By opting not to seek another term, DaSilva's decision allowed the members of the committee the opportunity to contemplate which of the remaining two individuals were best suited to lead the party for the next two years...and both candidates are more than qualified for the position.

As a former State Representative, and member of the Common Council, Taborsak's activism in the community is well known as well as her extensive political resume. Not to be outdone, as a former Common Council President under Gene Eriquez term as mayor, and vocal member of the council during in his last term in office (2007-2009), Levy's activism and political credentials are equally as impressive and well known to many in the area.

From last night, here's video footage of the vote:

Noting the obvious division among area Democrats, Taborsak's opening remarks centered around the need for unity in the party and an end to the conflict that has plagued the town committee for the last decade.

After the meeting, I had a chance to interview the new chairperson and talk to her about her goals in moving the committee forward.

With Taborsak as the new leader, will area Democrats finally put their bitterness behind them? Personally, I think the jury is still deliberating on that topic. Although Taborsak stuck a good tone with her opening remarks, it remains to be seen if her comments translates to people putting their differences aside for the common good of the party.

Tonight marks the start of the 2010-2012 Danbury Democratic Town Committee.

Due to the results of last week's primary, there is a good chance that there will be a more than one individual seeking the chairmanship so tonight's meeting should be rather interesting. (The stream will end after the election of officers is concluded).

If you can't make it to DTC headquarters tonight, make sure to check out HatCityBLOG as I'll be providing a live video stream of the election starting at 7:30 PM. If you've never seen the inner workings of a town committee, then I HIGHLY suggest that you tune in tonight.

(NOTE: I'll be testing the live video stream for everyone at 2:30 PM today for about 5 to 10 minutes. Feel free to test the stream and make sure you can get the video feed. If you have problems MAKE SURE TO UPGRADE YOUR VERSION OF ADOBE FLASH BY CLICKING HERE.

UPDATE: 8:00 PM The live video stream has ended and by a vote of 15 to 13, Lynn Taborsak has been elected the new chairperson of the Danbury Democratic Town Committee.

I'll have a recap on tonight's meeting (including an re-airing of the video footage of the committee vote) later tonight and tomorrow.
posted by ctblogger at 11:47 AM