People have emailed me wondering why I haven't posted in some time as there are alot of issues I need to address. Well, the site is being upgraded so I can post video and audio files without filling up the web space. As you know, I have a large archive of videos that I want to share with you but until I upgrade the site, I will be unable to post anything.

I should have things going smoothly very soon and I'll be back on track with the posts. Sorry for the brief inconvience.
posted by ctblogger at 11:38 AM 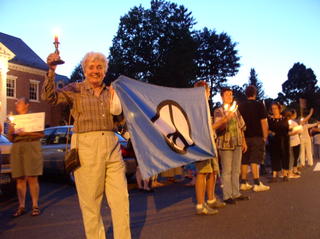 I attended the Cindy Sheehan vigil at the Edmond Town Hall and I was surprised over the size of the event (I counted 150 but people left by the time I started counting and The News Times reported the crowd at 200 which seems accurate.

You can view my images and video of the event here. Enjoy!
posted by ctblogger at 8:35 PM

Due to technical problems, I was unable to blog live from the Airport forum at City Hall last night. I have video of the event and I'm currently converting the footage to digital format and once it's done, I'll post it on the site with my commentary.

Sorry but I'll get things worked out so that I'll be able to blog during meetings in the future.
posted by ctblogger at 11:15 PM

I will blog live from the Airport fourm at City Hall tonight. Hopefully, I will be able to videotape the event but if not, I'll get the audio and post it later.
posted by ctblogger at 11:25 AM