I've received a number of emails asking me abou the debate from Wednesday. Unfortunately, I couldn't make the event so the only information I have is from the Newstimes. Not that anyone in Danbury knew about the event. I talked to a number of people and they had no idea there was a debate scheduled which brings me to my comment about the election...

To be honest, I'm surprised by the Democrats and their lackluster campaign. Nothing in the mail, no ads in the Newstimes, no ads on the radio. I've received so much information from Boughton's campaign you'd think he was running against no one. The lack of enthusiasm from the democrats is good news for Boughton and unless something drastic happens in the Espositio camp (i.e. get the support of the police department, reach out to the hispanic community for support, force another debate and get it on local cable television), Boughton going to win by a landslide.

Traffic, immigration and the unresolved police contract were the top issues at the first mayoral debate Wednesday between Mark Boughton and Dean Esposito.

In fact, the issue of the police contract was thrust before the candidates even before the debate began. About a dozen members of the Danbury Police Department picketed in the rain outside the Holiday Inn, where Boughton, the incumbent Republican, and Democrat Esposito faced off. The union rejected the city's contract offer and criticizes Boughton for the impasse.

During the debate, Boughton said the contract offer was the same one members of the Danbury Fire Department approved. The police contract is now headed to binding arbitration.

"You can't go to one group and say, 'I'll give you something a little better than I'm giving someone else," Boughton said. "We have to rein in spending."

Esposito said Boughton has not negotiated in good faith with the union. He said the police are willing to compromise.

Gary Hawley, president of Hawley Construction Corp. of Danbury, was a member of the debate panel that questioned the candidates. He talked about the problem of traffic on Interstate 84.

"We've all had time sitting on I-84 to contemplate it," Hawley said.

Boughton responded: "Traffic isn't a problem that just started three years ago. We have neglected our roads for 10 years."

"Yes, I have noticed a lot of election-year paving going on," Esposito said.

John Lamb, a radio personality with WLAD of Danbury, asked Boughton whether, if he had to do it over again, he would raise the issue of illegal immigration.

"Absolutely," Boughton said. "No question. It's unacceptable that our laws not be followed."

Boughton earned national attention when he suggested deputizing state police as federal agents to arrest immigrants who do not have visas or other paperwork allowing them to live in the United States legally.

Time magazine this year published an article about Danbury that focused on the volleyball issue.

"Time magazine depicted Danbury as one of the worst cities in the country," Esposito said. "A mayor is supposed to support the community. How embarrassing was it for this city to be depicted as the volleyball center of the world?"

The federal government is responsible for fixing the immigration issue, Esposito said, and all Boughton did by talking about volleyball was grab national headlines.

posted by ctblogger at 5:45 PM

Questions are raised over Nancy Johnson trip to Ecuador 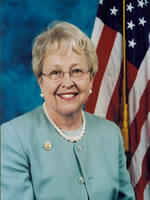 Washington watchdogs are questioning why The Nature Conservancy, a nonprofit conservation organization which receives federal funding, paid for Rep. Nancy Johnson, her husband, and three other house members' observation trip to Ecuador and the Galapagos Islands.

From the Hartford Courant

Johnson said the excursion was highly productive and typical of others she has taken throughout her 22-year House career. "I pick knowledge-based trips. I ask myself whether this is a subject I need to know about," she said, "and whether I'll be a better congressman if I know more."

She said this visit was "the first I've ever had the chance to go on that involved gaining a better understanding of international environmental issues and how they impact America."

Johnson also discussed immigration issues with an Ecuadorian foreign affairs ministry official. Danbury, which is in her district, has been rocked with controversy recently over influxes of people from Latin America.

But immigrant leaders in Danbury were surprised when they learned Johnson had gone to Ecuador because she had never accepted their offer to meet with them back home.

"If Mrs. Johnson is really looking for a solution to this problem, she needs to put all the pieces together," said Wilson Hernandez, a member of the Danbury Area Coalition for the Rights of Immigrants and a former president of the Ecuadorian Civic Center.

"She went there as a tourist, I guess, not as our representative," he said.

Johnson said Tuesday she was unaware that immigrant groups in Danbury had invited her to meet with them, but had discussed with her staff initiating such a meeting.

"We're anxious to meet with them," she said.

He asked why an agency that relies on money from the U.S. Agency for International Development, or AID, would take Johnson and three other House members on such a trip.

"I know money is fungible, but the Nature Conservancy gets federal money, so the question is whether taxpayer money is funneled through them for lobbying," Allison said.

The Nature Conservancy, which gets about $42 million in federal government grants per year, spent a total of $64,227 on the trips of the members - Johnson and Reps. John M. Spratt, D-S.C., Sam Johnson, R-Texas, and Ed Pastor, D-Ariz., - and their spouses.

"In order to get folks to see such far-flung places that matter so much in terms of conservation, you need to give them time to spend time with their families," he said.

Johnson agreed, saying "a member's life involves being separated from their family most of each week, and when I'm `home,' I'm really not home very much."

Furthermore, she said, her husband, a retired physician, was a science major at Harvard who has "long, extensive experience with plant and animal biology."

What does Johnson's husband have to do with the business of Congress? How did her trip benefit the people of Danbury? If she was went on the trip to address the immigration problem in Danbury, why didn't the Republican mayor of that city know anything about it?

Danbury Mayor Mark Boughton, whose call for increased immigration enforcement was ultimately rejected by the state, said he had not been aware before the trip that Johnson was going to Ecuador.

He said he was not personally briefed after the trip, but Johnson's district office sent him information that mentioned comments she had made in the House of Representatives.

On July 19, Johnson briefly referred to the trip during a debate on the Foreign Relations Authorization Act.

She said "illegal immigrants are hard workers and hope only for a better life," but find it difficult to fulfill their dreams and "can cause tremendous problems in cities like Danbury" by straining city services.

Johnson takes a trip to Ecuador and this is all she has said on the subject? Danbury Mayor Boughton wasn't informed on the trip although Danbury is in her district? How did this trip benefit the people in the fifth district?

UPDATE: WVIT, WTNH, and WFSB picked up on the story this morning. We'll see if their are any updates later today. If anyone has info on this (and it can be verified), shoot me an email.

UPDATE 2: I gave the impression that the Danbury Area Coalition for the Rights of Immigrants invited Johnson to Ecuador when they did not. They invited her to talk with them. Sorry for the confusion.
posted by ctblogger at 9:54 AM