Well, this is it. The last week till the election and all the candidates are out in full force banging doors and shaking hands.

I'll going to hit the streets talking to voters and candidates and I'll be live blogging throughout the day.
posted by ctblogger at 10:27 AM

Yesterday at the Braodview Middle school, local Democrats showed their support for Democratic gubernatorial candidate John DeStefano as they kicked off their grassroot campaign in the area.

From The Danbury News Times

Two Democrats who have been major players in the Danbury political scene for the past decade threw their support behind John DeStefano's gubernatorial campaign Wednesday.

They were joined in the endorsement by Danbury Democratic Party Chairman Bernie Gallo.

The school setting was to highlight DeStefano's accomplishments in education, Maloney said.

"Mayor DeStefano cut the dropout rate by 40 percent, and he rebuilt most of the schools in the city of New Haven," Maloney said.

"The state of Connecticut, over the past 12 years, has not kept faith with the educational needs of the cities and the community," Maloney said. "John DeStefano is a mayor, a man and a candidate for governor with a commitment to education."

DeStefano is competing with Stamford Mayor Dan Malloy for the Democratic nomination in 2006. Republican Gov. M. Jodi Rell has announced her bid for re-election and runs more than 30 points ahead of both Democrats in the most recent polls.

The Wednesday event was billed as the kickoff of the grassroots campaign for DeStefano in Danbury.

Eriquez said DeStefano would make needed educational changes and provide state funding so cities and towns won't have to bear as much of the burden.

"Our curricula remains geared towards the demands of a different century," Eriquez said. "John has managed to make the city of New Haven the largest provider of preschool services in the state of Connecticut."

DeStefano said it's time for a "22nd century curriculum" in schools. He said as governor he would provide more state funding for schools, full-day kindergarten across the state and universal preschool.

Both Democratic candidates seem to have a solid fund-raising base. DeStefano has raised about $2.5 million, while Malloy has raised $1.7 million. In the last quarter, Malloy raised $403,000 to edge out DeStefano's $339,000.

There has not been a poll to measure support of the two Democratic candidates. But a Quinnipiac University poll of potential races for governor in July showed Rell beating DeStefano by 61-22 percent and Malloy by 63-18 percent.

The Danbury endorsements are the latest for DeStefano, who has wrapped up the endorsement of 20 labor unions, including those representing the state's police, carpenters and communication workers, and U.S. Rep. Rosa DeLauro, D-3rd Dist., plus several mayors and state legislators.

Here's the Boughton interview on "In Our Opinion" from Sept 23 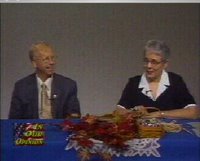 Well, you demanded it and you finally got it. We promised you videos from the local cable access shows and here is our first one.

Mayor Mark Boughton was on Lynn Waller's "In Our Opinion" on Sept 23 where he addressed a wide range of issues. Many of you emailed us and requested that we post this show because of some have suggested that comments made about the police contract were misleading.

Let us give you some background on this show. Now first, let us say that we like this show and think its the most informative show on Comcast. Lynn Waller is a dedicated political watcher and we see her at most (if not all) meetings. That being said, we really take issue with this imterview because Waller is Boughton supporter and a very social and fiscal conservative who has a history of being critical to Boughton's critics and while being very supportive to the mayor which some people view as a giving Mayor Boughton a free pass.

Many viewed this interview as an example of the type of biased broadcasting simply because Waller never challenges the mayor on ANY of the claims he made in the interview such as his views on the police union contract and immigration. We found it interesting that while Waller didn't present the Mayor with any hard questions, she had no problem going after the police union members she had on her show a couple of weeks later (we'll have that video up soon so you can see for yourself).

Again, we like the show but, it would be refreshing if Waller would not come off as a partisan when conducting these types of interviews because it gives the impression that she's being one sided. Their are valid points both sides have in terms of immigration and the police situation but how does that help your viewers when you give the side you agree with a free pass while saving the hard questions for the side you don't support?

We broke the interview down into three parts. 1. The police contract dispute 2. The immigration situation and 3. The airport situation. The entire interview is 30 minutes long and we just don't have the bandwidth to post the entire show but if you want the entire show and you have a broadband connection, email us and we'll supply it to you.

We're offering the video in two formats: Hi resolution (broadband) and low resolution (for dail up readers). For the broadband readers, when you click on the Hi-Res link, you will be transfered to yousendit.com where you can download the video. 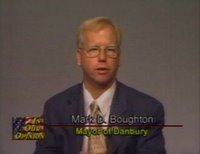 Boughton on the airport situation

We'll post the interview Waller had with the police union soon and you can judge for yourself whether or not Waller gave the mayor a free ride while saving the hard questions for the police union (who by the way, had no problem answering her questions).
posted by ctblogger at 2:33 PM