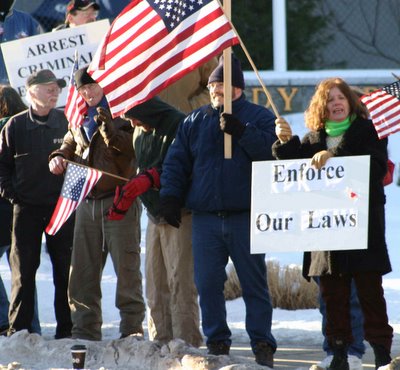 Well, I guess I got to see yet another silly publicity stunt done by the Connecticut Citizens for Immigration Control (CTCIC) that places yet another black eye on the city of Danbury.

The only thing worth mentioning about this silly rally (in which no one really showed up besides counter-demonstrators and the press) was the weather (oh my, it was cold). Don't let no anyone tell you otherwise, this was nothing more than yet another publicity stunt by our favorite little hate-group. I estimate there was about 50 anti-immigrant CTCIC members (at best) versus 80-90 pro-immigrant supporters which is about right since the couter-protesters have always outnumber these CTCIC loonies.

All this rally was about was the usual silly CTCIC crew waving their American flags, yelling "U.S.A" and posing for any camera that pointed in their direction for maximum exposure. Few motorists acknowledged them by honking their horns and most cars just passed by and ignored them. Most of the people I talked to on the street just wanted these idiots to hurry up and leave and I didn't see or talk to anyone who supported the CTCIC (believe me, I walked all around the area and as you can see by the video, unlike the pro-immigrant people who their fair share of supporters, the CTCIC were pretty much by themselves on the street corner.

Now I'm sure the CTCIC are going to say that this rally was a success but I can't see how it was. What did it accomplish...nothing but a reason for reporters to get up early and walk around in the cold saying "now what am I going to write about?" The CTCIC loonies even cut their so-called rally short by about a half an hour to the applause of the counter-demonstrators who sang them a nice song as they packed up and walked away (check the end of the video and see as even the cops even get a chuckle over the song).

Well, I'm also sure that the press is going to make much out of nothing tomorrow but as a person who was there (and unlike most CTCIC members, lives in Danbury) I can tell you that most people I talked to are just disgusted with the CTCIC and would prefer them to leave.

I'll say it again, THERE WERE FEW PEOPLE SUPPORTING THE CTCIC! Look at the video if you think I'm wrong. I was there at 7:45 till the end and at most, the CTCIC got a handful of motorists (maybe 20) to honk their horns in support...that's it. NO new membership, NO people from the area coming down and thanking the CTCIC for all they did...nothing. On the other hand, the pro-immigrant group not only outnumbered the CTCIC, they had decent amount of support from people on the street and even led a small march down Main Street (I was only able to get the end of it on video).

I'll add to this post later as things are very busy right now but I thought it would be important to show everyone the video from the event so when you read this in the paper, you'll know which papers blew the so-called event out of proportion.

You can view the video by clicking here. I'll post a hi-resolution version video later.
posted by ctblogger at 4:59 PM 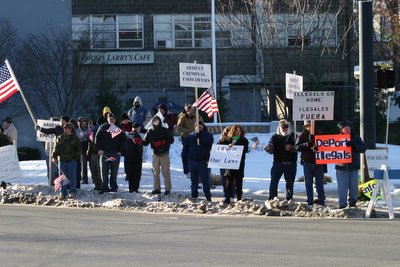 Just got back from the Anti-Immigration demostration over at Kennedy Park and I'll post a complete wrap-up of the event (if you can call it that) later.

Briefly, this was mostly a publicity stunt by the loonies of the Connecticut Citizens for Immigration Control and like most times, they were easily outnumbered by counter protestors.

I working on converting the video I have of the event and I'll post my complete report later.
posted by ctblogger at 11:08 AM

Dan Zarrella from NobodyIsIllegal.org did a great piece about the hate group which calls themselves the Connecticut Citizens for Immigration Control and it's worth a read.

Seeing that these scumbags will be harrassing migrant workers on Kennedy Avenue on January 7th, you should read into the background of these jerks.

Don't let their words fool you; they ARE a racist hate group without the white sheets. They do nothing but bring shame to our fine city with their hate-filled rhetoric and it's about time people stand up against these pigs.

More information on the CTCIC can be found here and here. I've let my feelings about these assholes known so know it's your turn. Come out on January 7th and give the CTCIC a piece of your mind!

...and you can thank Mayor Boughton for creating the type of atmosphere which led to the creation of this group in the first place.
posted by ctblogger at 3:58 PM

Seems like the wackos from The Connecticut Citizens for Immigration Control are up to their old tricks of doing stupid shit in order to get press coverage. Here's their latest publicity stunt and be sure that they'll be front and center harrassing the migrant workers on Kennedy Avenue in Danbury.

Hat tip to My Left Nutmeg

A headsup to my denizens in the state. A copy of an e-mail forwarded to me by an acquaintance:

State and local immigration reform groups across the nation are
holding a national day of protest on Saturday, January 7, from
7:30-9:30AM in their respective areas at illegal worker pick-up
sites.

Sign up today to join this national demonstration through the
Connecticut Citizens for Immigration Reform web site. Groups are
invited to participate, as are individuals.

This is a great opportunity to stand up against the illegal alien
invasion and make your voice heard!

Go to the website and view the outrageousness of it.

Join the Protest. That's right. Have them think you are covering an area, then don't. Carry the weapon.

Then:
There is one protest set up in Conn. (click on the, "Contact Sheet for Participating States and Locations" There are two set up for Stamford. (Go to the bottom for list of sites.)

Now, my suggestion. Print out their flyer. Have a group go to a site that you have, "futuritively set up as a ruse." Have a demonstration. Print out scads of the flyers, and burn them.

Then, counterprotest at the, "El Centro" site. Los illegales will be counting on your support. Failure to act will appear as hypocrasy, and will be blasted throughout the blogosphere.

My suggestion, don't waste your time with these assholes by only counterportesting. The Connecticut Citizens for Immigration Control (CTCIC) are nothing more than a hate group and a joke. As I sated before, these morons are only interested in publicity and making a scene and the counter-protestors outnumber the members of the group (all 20 of them) at all of their meetings.

My advise, bring a video and digital camera and just like they do the immigrants, take a picture of all of these idiots and monitor their every move. Get each of their names, take pictures of their cars and bring the protest back to where they live. You see, most of these clowns are too afraid to be known of memebrs and they keep all of their meetings private just like a sex offender, every person in the neighborhood should know that they live next to a racist hate-monger.

Yeah, a big ol' counter protest in front of every CTCIC memebr's house. That would be rich!
posted by ctblogger at 12:38 PM