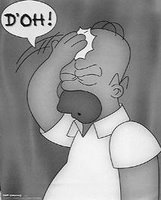 It seems like some of the links in our posts have gone dead. This probably happened because the articles have moved to a different page (many media outlets archive their articles after a certain period of time).

We're aware of the matter and are attempting to remedy the situation now. Sorry for the inconvenience.
posted by ctblogger at 3:23 PM

None of The Above

It's somewhat amazing to me that by this time, we haven't developed more than two political parties, more than two teams; and what was always intended as a multiple choice question has sadly become a True/False. In the recent Danbury elections, the number of votes, region-wide, for 3rd party candidates barely surpassed that of the votes gathered by Bugs Bunny and Paul Bunyan. Now maybe I can understand this in the bigger races - the mayoral seats, the gubernatorial seats, the national Congress, the Presidency - but City Council? and Zoning Board? I defy 90% of the November electorate to even name how many seats ARE on the Council or the Board.

But my point is not to attack anyone's civics - rather to ask if you don't really understand the merits of the race, why not pull the level as haphazardly for "DIFFERENT," as opposed to " VAGUE PARTY LOYALTY?" Even in this land of plenty, it seems we have this fatigue of "sameness" in our culture when it comes to politics. The same choices...friend of development and business OR "tree hugger..." tax breaks for the wealthiest OR tax increases for all....entitlements for needed public services OR giving little attention to the disadvantaged. And we know it's not that clear. Maybe the next time around, if you pull that third row for Sheriff's race -and we see the world doesn't end with a 3rd Party Sheriff - it'll make it easier to put a different guy in the Council seat, then the mayor's seat and lo' and behold there's a new show that the Lib Dems and Con Reps will have to script around. Until then, the choice should be "None Of The Above."
posted by Pilgrim Vin at 3:24 PM

There are new writers joining the Hat City Blog team which means we'll be able to cover more local stories and provide more commentary on the major local topics.

We're also updating the site with more features including a video databank which will be added to the site soon.

Be on the lookout for the new improvments and postings from the new writers. Trust me when I say that you'll like what see and read.
posted by ctblogger at 3:44 PM