If anyone attended the anti-immigration forum

Send me an email, I'd like to talk to you.

UPADATE (03.03.06): Thanks those who attended and emailed me. I'm still working on a couple of stories but I'll get the post on the forum online soon.
posted by ctblogger at 12:40 PM

Don't think I forgot about commenting about last Saturday's forum on illegal immigration (or what I'd like to call hatefest). I'll have a full roundup on the forum soon. We've received so much information on the speakers at the event from various organizations who attended the event. They have a rap sheet on the various speakers that's a mile long and it makes me wonder if all the people who attended the event did their homework (including the public officals who applauded after the speeches).

Anyway, we'll get the everything set so you can watch and judge for yourself.
posted by ctblogger at 10:55 AM 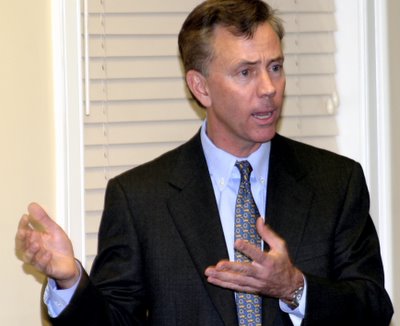 From My Left Nutmeg

Ned Lamont, described as a “successful businessman and progressive Democrat,” will appear in Ridgefield at a party on Sunday, March 5, from 2 to 4 p.m. at the home of Harry and Lynne Sewell, 138 Haviland Road. The party on March 5 is not a fundraiser, is designed to introduce Ned Lamont to Ridgefield, said Ms. Johnson-Lundberg.

Democrat Ned Lamont is challenging Joe Lieberman for Senate and everyone should come out and hear what he has to say.

For more informaion on Ned Lamont, check out the following sites:

I was trying this new blogging software out and I deleted my last post by mistake. I'll just comment on the anti-immigration forum later.
posted by ctblogger at 2:10 PM