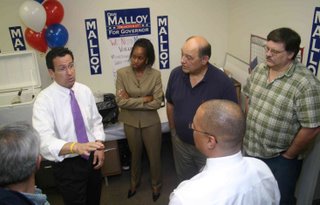 On Thursday night, I had the opportunity to meet Dan Malloy and his supporters as he opened his first regional office at Democratic Headquarters on 161 Main Street in Danbury.

An impressive crowd of approximately 60-70 from Danbury and the surrounding area stopped by and offered their support for the endorsed candidate of the Democratic Party for Governor. Malloy returned the favor by delivering an inspiration speech and reinforcing his belief that he has what it takes to beat New Haven Mayor John DeStefano in the Democratic primary in August and defeating Governor Rell in the general election in November.

As many recall, Danbury was on of the cities in Connecticut that help give Malloy the victory over DeStefano at the State Convention last month so it wasn't ironic that Malloy opened his first of many offices in Hat City. Also, given the fact that Danbury is one of the largest cities in lower Fairfield County and that the Democratic Headquarters in Danbury is open year round, it was a smart move for Malloy's campaign to step up shop in the area. 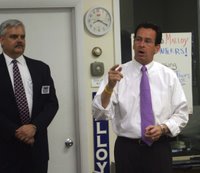 Although Malloy won the nomination, he still has his work cut out for himself against DeStefano and Rell. According to the latest Quinnipiac poll, Gov. Rell leads Malloy 65 to 22 percent. Also, according to the poll, if the primary was held today, Malloy would lose to DeStefano 46 percent to 35 percent. The most telling part of the poll is the number of undecided voters or people who don’t know enough about Malloy to offer an opinion. When asked to offer an opinion of Malloy, 79 percent of the people polled haven’t heard enough of him. If Malloy is to gain ground on Rell, it is critical for him to bring these numbers down which is his goal as we head into the summer.

While attending the grand opening, I was able to get some comments from supporters of Malloy including 5th District Director Joelle Schmitz, Danbury State Represenative and Deputy Speaker Bob Godfrey, and Danbury Democratic Town Committee Chairman Joe DaSilva (pictured left to right). I was able to bring back for you readers an inside view of Malloy's big night, comments from Malloy's supporters, and an interview with the man of the night, Dan Malloy himself.

You can view photos from the event by clicking here.

NOTE: These video file aren't small so do bother attempting to view them if you're not on a broadband connection. Also, if you're experiencing playback problems, pause the video and allow your computer some time to upload the file. Enjoy.

Video clip 1: Voters, volunteers, and local political leaders offer their viewpoint regarding Dan Malloy the man, and his crusade to defeat Gov. Rell.

Video clip 2: Highlights of Malloy's speech to his supporters and my one on one interview.

UPDATE: As a note, I do not (and will not) endorse Malloy or DeStefano and this post should not be seen as an endorsement but more of a inside look into a campaign and view from people who support a particluar candidate. I've always given these two candidates equal time as I think it's important for undecided voters to learn more about these two guys. I just happened to do Malloy first since he was in the area.

Rest assusred that I will be doing a piece on DeStefano (with all the trimmings) in the very near future.
posted by ctblogger at 1:02 PM

In jail without the bail

Danbury trash kingpin James Galante lost control of his empire Friday as FBI agents took him into custody at his White Street garbage plant as part of a breathtakingly broad investigation into the garbage-hauling industry's ties to organized crime.

Galante was charged with 72 counts of racketeering, extortion and witness tampering, among other charges. He was one of 29 people indicted, including an alleged mob leader, a former Waterbury mayor, a state trooper, a Drug Enforcement Agency official and a former hockey coach.

"Organized crime's stranglehold on the citizens of Connecticut through its control of the trash industry has been broken," said Kimberly Mertz, the state's top FBI agent.

The racketeering charges against Galante, owner of Automated Waste Disposal of Danbury, included acts of violence, threats of violence, extortion, bribery and tax evasion. Several of the charges carry 20-year prison sentences and fines of up to $250,000.

And it doesn't stop there. It seems like the hockey team is skating on thin ice as well.

James Galante's dream team, the Danbury Trashers, found itself skating on thin ice Friday with allegations that several of the hockey players and their wives were made part of a plan to defraud the United Hockey League.

Although the families were not identified in the federal indictments, investigators said Galante paid certain players and their spouses with trash company checks, even though they did not work for any of his trash businesses.

According to the indictments, five hockey players and their spouses were added to the payrolls of the various companies owned by Galante, even though the players were receiving regular salaries from the Trashers' team account.

The team's former coach, J. Todd Stirling, was also one of the 29 people charged in the investigation.

One player during the 2004-05 season was allegedly added to the books as a "salesman" for Diversified Waste Disposal and given a DWD check at the end of the month, as well as one from the hockey team.

In 2004, the wife of another hockey player was added to the payroll of Automated Waste Disposal at a yearly salary of $74,000, even though she never worked there.

Who loses out in the end...those faithful Trasher fans.

One question you should ask yourself...how far up the foodchain will this story take us in Danbury?

Who else will be caught up in this net?

Did people turn a blind eye to the dealings of Galante?

That's an angle I'd like the newspaper to examine...or maybe I'll just do it myself.
posted by ctblogger at 9:52 AM 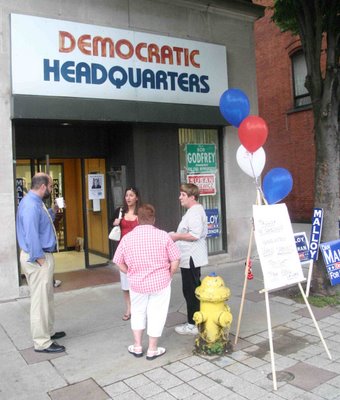 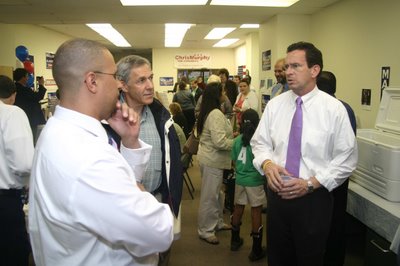 Dan Malloy opened his office in Danbury Thursday night and I'll have the full rundown of the big event (inc;luding video highlights) later today.
posted by ctblogger at 10:04 AM

You knew this day would come...

Danbury businessman James Galante and several employees of his trash hauling company were arrested Friday morning as part of the federal investigation into organized crime and the region's trash hauling industry.

Galante was to be brought to U.S. District Court for arraignment.

Galante was arrested at his Danbury trash hauling company, Automated Waste Disposal, according to his attorney, Hugh Keefe.

"It was fully expected. This particular date was not, but the next issue now is his release. I expect they will seek detention," Keefe said.

"I'm told it's a 111 page indictment that is under seal and I have not seen it," Pickerstein said.

Oh Nancy, shame on you!

posted by ctblogger at 1:51 PM

Eileen FitzGerald does an excellent job in her reporting of the Board of Education's pick for School Superintendent. It's very detailed and worth a read.

I still don't know why the News-Times couldn't do a quick announcement of this imporant decision in their news alert yesterday but...

UPDATE: Now that's better. The News-Times made Eileen's article their TOP STORY on their website.

Attaboy!
posted by ctblogger at 11:54 AM

BREAKING NEWS: Board of Ed. pick Dr. Pascarella as their choice for School Superintendent

The search seems to be over.

From Board of Education Press Release:

The Danbury Board of Education has identified Dr. Sal V. Pascarella as the candidate of choice for Superintendent of Schools. "Our board has worked very hard in meeting and interviewing excellent candidates. The final phase will include a site visit to Dr. Pascarella’s current district," said Chair Joan Hodge. "In addition, Dr. Pascarella will spend a day in Danbury meeting with administrators, faculty, staff and students."

Dr. Pascarella brings extensive educational leadership and experience to this position. He is currently Superintendent of Schools in Old Saybrook, Connecticut. During the past thirteen years, he has helped create a high energy, team-oriented atmosphere where students, parents, teachers, school board members and the community join together and work toward academic excellence. In 2006, Old Saybrook Schools was the recipient of the prestigious National Civic Star Award for Connecticut in recognition for excellence in establishing school and community partnerships that encourage student achievement and academics. Under Dr. Pascarella’s stewardship, the Old Saybrook School District has been recognized for an award winning National Blue Ribbon School and for its students consistently achieving academically above their state and national comparators.

Prior to Old Saybrook, Dr. Pascarella was Assistant Superintendent of Curriculum and the Building Principal of Evanston Township High School, in Evanston, Illinois. During his tenure there, he acted as curricula planner and advisor to the Evanston elementary schools, a multi-ethnic system with eight schools and 7,500 students. He also helped institute the World of Difference Program, a social responsibility curriculum to reduce prejudice through exploration of strategies which enhance the ability of students to cultivate an appreciation of diversity. He received national recognition from the College Board for the leadership and vision for developing S.T.A.E. (Steps Toward Academic Excellence), a comprehensive program to identify marginal students which resulted in increased numbers of honors class participants.

Prior to Evanston, Dr. Pascarella was principal of Jack Benny Middle School in Waukegan Illinois. He began his career as a middle school teacher and instruction team leader in Long Grove, Illinois.

Dr. Pascarella received his Bachelor of Arts degree from Lea College and his Masters and Doctorate of Education degrees from Loyola University in Chicago. He has participated in post-doctoral studies at Harvard Graduate School of Education in Cambridge, MA and the University of Oxford in England. He is currently an adjunct professor at Sacred Heart University in the Educational Leadership Department.

Hat City Blog will bring you more information on this developing story soon.

UPDATE 6:00 P.M.: It seems like the News-Times is more interested in updating us on such critical hard-hitting stories such as the condition of a pitbull dog and the latest drama surrounding rap idiot DMX than this HUGE story.

Remember where you heard this story from first...
posted by ctblogger at 5:17 PM