After much beta testing, I'm starting to revise the CSS code on this blog. You'll be seeing changes to the site that are long overdue. The long-awaited video section will be added to the site and you'll be able to watch every meeting I attend (I videotape everything).

Missed a Common Council meeting...have no fear, you can watch it here.

Want to see highlights of the local public access shows...walla, you can watch all the shows you missed.

If there is somehting you would like me to cover that I'm missing, please send me an email at hatcityblog@yahoo.com.

Believe me, things are going to heat up on this site this summer!
posted by ctblogger at 1:52 PM 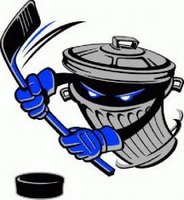 My heart goes out to all of those roudy, drunk, crazy, and great fans who came out game after game cheering on their team.

They're the real losers...

ess than a month after playing for the Colonial Cup championship, the Danbury Trashers have suspended operations for the 2006-07 season, the United Hockey League announced Monday night.

The move comes after Trashers owners James Galante was arrested by federal authorities last Friday on a 72-count indictment. Authorities have accused Galante of racketeering, extortion, witness tampering and circumventing the UHL's salary cap, among other charges.

"I was shocked to find out about an hour ago,'' Trashers forward Drew Omicioli said Monday night, shortly after 11 from his home in Rhode Island. "It's something that we knew could happen.

"Hopefully, it's one of those things where it could be settled for the following year. Like I said, I'm just pretty shocked, right now.''

Trashers president A.J. Galante, the son of James Galante, was unavailable for comment Monday night, but the team's Web site did have a brief message for fans and advertisers:

Hey A.J, how about apoligizing to your fans stood by the team and sold out the arena during every home game.

Is an apology too much to ask?
posted by ctblogger at 1:45 PM

James Galante or the people who turned a blind eye to his shady dealings?

Do you think no one in this city didn't know what Galante was up to?

1. The fact that Galante was allegedly associated with the mob was in the press for at least the last year.

2. Everyone knew about his monopoly on the trash business in the area.

3. How can anyone forget about Galante going after a hockey referee at a Trasher's game...that didn't seem strange or somewhat odd?

And this is just the stuff that was briefly reported on in the press. Since we know the News-Times isn't the greatest when it comes to actually reporting on the news that effects this area, think about all the crap that went on unreported in the press (and people gossip about in private).

Look, I'll make this real simple. You just know someone, somewhere knew something that the average Joe didn't know about the trash king and the people who know everything about everyone around town are no other than politicians and people the polticians talk to (trust me on this folks).

Was his arrest a big surprise to anyone...no. You don't have the feds crawling all over your back if you didn't do anything wrong and they've been looking into his trash business for at least the last year (if not longer).

Although Galante had a well-known dark-side, people still associated with him like it was no big deal. People were more than happy to take his money, name stuff after him, let him run a hockey team that screwed some of the most dedicated fans I've even seen.

If there was someone you should feel sorry for, it's those faithful fans who came out game after game to root for their favorite hockey team only to find out that they were taken for a ride. Those hard-working people who live paycheck to paycheck because the rent, taxes, and bills are so high it's not even funny...those people scrapped up enough cash and came out to a hockey game to have a great time and look what they get for their faithfulness and loyality. You know I love you fans as we've hung out on more than one night (and all of you guys are crazy) but don't count on a third season of Trasher hockey in Hat City...it's over and I'm just as sad as you are right now which is why I want some answers.

What about the people who were screwed out of their money by being forced to pay high prices for their trash removal. Where was the outrage when Galante gobbled up all the trash businesses while making it look like there was some type of market by using different trash company names....

Oh, there is so much more to talk about regarding this case, Galante, and the people who were gald to take his cash and services. This goes deeper than Galante and those individuals have some explaining to do.

AND spare me the innocent till proven guilty line. If I hear someone say that, I'm laughing straight in their face.

We were all screwed and we should demand answers as Galante's scheme went on for a long time without anyone raising a red flag. The more I follow the money trail, the more pissed off I become and hopefully, everyone will be just as upset as I am right now.
posted by ctblogger at 4:15 PM

This is a small list of things happening in the city this week.

Also, go check out a baseball game and support the Danbury Westerners. They're playing a bunch of games so try to make it to one game and cheer these guys on.

Now, I know this list is far from complete so, if you have anything you would like for me to add, please send me an email at hatcityblog@yahoo.com (or add your events in the comments section of this post). I'll update this list throughout the week so check back often.
posted by ctblogger at 12:49 PM 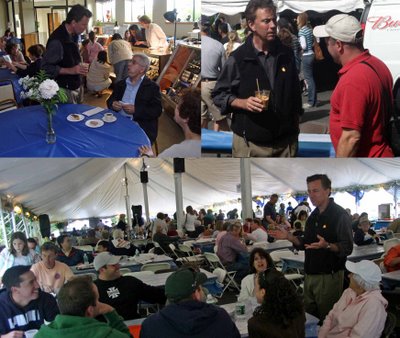 Look who came down to my neck of the woods.

Ned Lamont came to the Greek festival in Danbury on Saturday to get a taste of the Greek experience.

CTBob and yours truly were on hand and caught up with Lamont and asked him a few questions regarding his campaign and his crusade to unseat George Bush's favorite Democrat.

Here's the interview (good grief, I think I'm turning into an online reporter). Hat's off to CTBob, that man knows video!

NOTE: I will post my full report on my day at the Greek festival very soon.