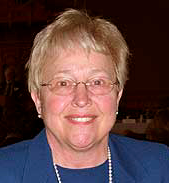 Oh my, looks like Nancy Johnson is planning to go negative on Chris Murphy.

I just received a push poll, didn't take down the detailed information (sorry)but it was essentially a generic political poll followed by several nasty questions about Chris Murphy, Nancy Johnson's opponent in the race. There was nothing negative presented about Nancy Johnson.

Moveon.org was also slammed in the push poll as an "ultra-liberal organization," and the most memorable question was:

"Would you be more likely or less likely to vote for Chris Murphy knowing that he has the support of organization that used the coffins of dead American soldiers in their advertisements?"

The other push polly questions were about some changes to medicare (increasing costs to senior), something about a senior athletic competition (?) and the horrors of translating documents into french and spanish...

The greatest thing about this push poll: I started being somewhat supportive of Chris Murphy. By the end, I was ready to volunteer for his campaign.

So much for Nancy running on her record. BTW: Wasn't it Johnson who complained about negative ads?
posted by ctblogger at 11:50 AM

(In honor of tonight's big debate between John DeStefano and Dan Malloy, I'm unlocking the ConnecticutBLOG and Hat City BLOG archive and re-posting several of my encounters with the two candidates. I hope you enjoy the trip down memory lane. Be sure to check back often as I'll provide more video highlights between the two men who want to challenge Gov. Rell. This video highlight was recorded when the two candidates visited the Danbury DTC meeting in April 2006. Enjoy!) 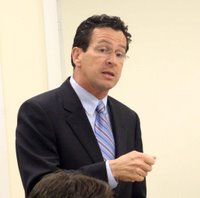 With the convention fast approaching, Democratic candidates are traveling across the state meeting delegates at the various monthly town committee meetings. Since both candidates know that in this tight primary race and since every delegate votes counts, it came to no surprise that both Stamford Mayor Dan Malloy and New Haven Mayor John DeStefano paid a visit to the Democratic Town Committee and each candidate made their case to the committee while looking for support from the public. 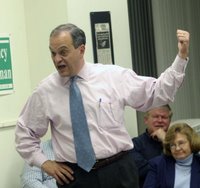 It was a rare chance to see both candidates in person and it gave the committee and the public who attended the meeting a opportunity to hear each candidate make their case get them to answer questions on a wide range of topics. If you couldn't make the meeting, don't worry because we recorded the entire meeting just for you.

Here are some video highlights from both candidates: 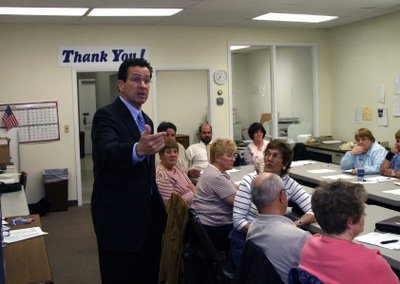 Clip 02: Malloy explains how he can beat Gov. Jodi Rell:


Next up: John DeStefano: 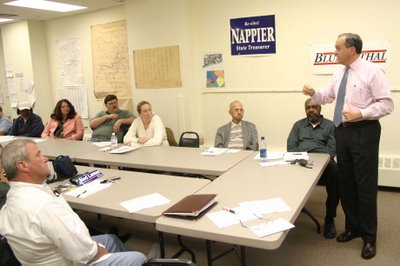 Clip 05: DeStefano answers question regarding health care:
posted by ctblogger at 11:18 AM