Meet the future of the Democratic Party 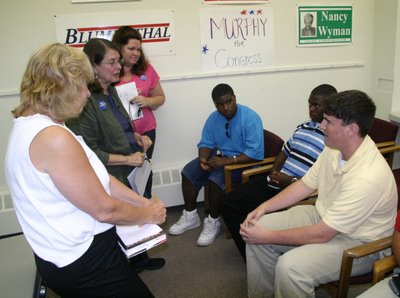 Seems like someone is trying to re-start the Young Dems chapter in Danbury and after almost 30 years, it's about time.

Billy Taylor, Emmanuel Omokaro (Senior Class President at DHS) and Leighton Roye (Board of Governors representative at DHS) introduced themselves to the Danbry DTC on Monday night and I grabbed them for a quick interview.
For more information, you can reach the guys at the following email address.

Drop them an email and thank them for getting involved in politics. The youth is the future.

You can also get more information on the Young Dems on the Danbury DTC website.
posted by ctblogger at 10:32 AM 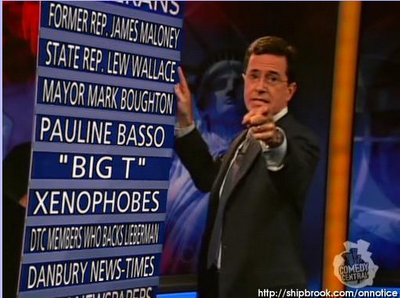 If you're on this list, you should be concerned...
posted by ctblogger at 6:58 PM

This should be interesting.

Mayor Mark Boughton was subpoenaed today to appear at a hearing in the James Galante racketeering case.

The subpoena was one of three issued by Galante’s attorney Hugh Keefe for a hearing Tuesday into whether Galante should be allowed to run his businesses again while he awaits trial.

The other subpoenas went to Cheryl Reedy, director of the Housatonic Resource Recovery Authority and Michael Gill, the chairman of the HRRA. Boughton is a member of the HRRA executive committee.

posted by ctblogger at 4:23 PM

A judge lashed out at Keith Foster before sentencing him to 110 years in prison today.

Foster, convicted of murdering 13-year-old Maryann Measles of New Milford, said he was not involved in the crime.

"I hope someday they will know the real truth," he said.

However, that statement triggered an angry response from Judge Thomas O'Keefe.

"Prisons are for people like you. I won't lose a second of sleep over this sentence," O'Keefe said.

The judge summarized with: "There is one word that describes this -- and it's evil."

Foster and a group of people from New Milford raped and beat Measles in 1997 after they thought she was going to police with statutory rape allegations.

Measles’ mother said she was happy with Foster’s sentence.

"He needed to hear those high numbers," Cindi Measles said. "He’s a coward in my eyes. This isn’t the end of the road. It’s not the end yet, but with him it is, thank God."

It's going to be a hard time for Foster in jail. Inmates don't like people who rape and kill girls.
posted by ctblogger at 4:16 PM

FYI: The Danbury Democratic Town Committee will hold their monthly meeting tonight at 7:30 at Democratic Headquarters.

Oh man, Matt Paulsen is online. This can't be good news for the board of education in Bethel.

I've known Paulsen for over ten years and although we don't see eye to eye on several issues, I've always admired his determination in keeping the politicians in Bethel accountable for their actions.

Read his latest LTE in the News Times.

The only thing missing from the article was a reference to Bethel Action Committee's Web site, www.bethelactioncommittee.org, where visitors can view and print actual hotel, restaurant and limousine receipts from school administrators and see firsthand how our taxpayer dollars are being misused.

From 2003 to 2006, school officials made parents pay for their children to play sports while staying in five-star hotels and eating in four-star restaurants at our expense. And the school lobbyists claim we need to pass budgets "for the children?"

It's scandals like this that further erode the trust parents and taxpayers have toward the Bethel Public Schools.

If only we had groups like this in apathetically-challenged Danbury.
posted by ctblogger at 11:29 AM