While I won't elaborate on anything surrounding the case yet (I'm still taking a well-needed Thanksgiving break from blogging), I couldn't resist pointing out to a post on Crooks and Liars that focuses on the latest non-sense from Lou Dobbs.

The recent attention paid to a notorious Long Island hate crime in which a group of young whites went in search of Latinos to harm has raised serious questions about the relationship between immigrant-bashing rhetoric and the surge of anti-Latino bias crimes nationally.

And the mainstream purveyors of this rhetoric -- particularly pundits like Bill O'Reilly and Lou Dobbs -- are denying their culpability in the only means available to them: By distorting the reality of hate crimes themselves.

And in Dobbs', as we saw on his Monday program, it entails distorting statistics and pretending that he's never bashed or demonized Latinos on his CNN show:


DOBBS: Advocates of open borders and amnesty accusing border security advocates of fostering a wave of hate, but as usual, those groups led by La Raza and MALDEF were long on rhetoric and absolutely, absolutely devoid of facts or respect for them. Bill Tucker has our report.

BILL TUCKER, CNN CORRESPONDENT (voice-over): Being tough on illegal immigration is a bad thing in the eyes of La Raza, a Hispanic special interest group which says it represents the civil rights of all Latino immigrants. The group blames the murder of Marcello Lucero, an Ecuadorian immigrant on Long Island, New York, on a wave of immigrant hate sparked by local politicians who have called for enforcement of immigration law.

JANET MURGUIA, NATIONAL COUNCIL OF LA RAZA: Steve Levy has taken a notably hard line against immigrants in his county and has been lauded by cable hosts like Lou Dobbs as a folk hero.

TUCKER: The community has shown no tolerance for the crime. Seven teenagers were quickly arrested and charged with hate crimes ranging from assault to manslaughter in connection with that murder, the leader of the gang being held without bail. Lucero's murder though is being used by special interest groups like La Raza and MALDEF to call attention to what they call "a wave of hate crime in America."

However, just last month the FBI reported a slight decline in hate crimes nationally last year. The FBI saying there were just over 7,600 hate crimes versus just over 7,700 the year before. Groups calling for the enforcement of immigration law are furious that La Raza and MALDEF and others equate their position with hate.

DAN STEIN, F.A.I.R.: Their true agenda is to try to stop public discussion about the need to control the borders. And they are using isolated incidents, tragic incidents, to be sure, but isolated ones, and distorting statistics to try to muzzle important free-speech rights in this country.

TUCKER: Not once in the news conference was the phrase "illegal immigration" used or heard, instead the phrase "immigrant bashing" and "anti-immigrant" were the word choices of the day.

Dobbs and Tucker essentially lie by omission here: Even though hate crimes have in fact declined overall in the past couple of years, anti-Latino bias crimes have actually increased significantly. In other words, the statistics actually speak strongly to the fact that Latino-bashing bias crimes are on the rise because those figures run counter to the larger trend of declines in such crimes generally.

Our comrades at the Southern Law Poverty Center has more...

Last night, CNN’s “Lou Dobbs Tonight” aired a segment criticizing the National Council of La Raza (NCLR) and the Mexican American Legal Defense and Education Fund (MALDEF) for holding a news conference earlier in the day calling attention to the link between anti-immigrant rhetoric and hate crimes against Latinos. The groups were reacting to the recent murder of Marcello Lucero, an Ecuadorian immigrant, who was fatally attacked in early November by seven high school students in Suffolk County, New York.

“Suffolk County is a particularly good example of elected officials stoking the fires of anti-immigrant sentiment,” NCLR head Janet Murguia said during the press conference. She spotlighted the anti-immigrant rhetoric of Suffolk County Executive Steve Levy, saying he had been “notably hard line against immigrants in his county.” Earlier, Levy stated that the Lucero murder would have been a “one-day story” if the media hadn’t chosen to hype it. Levy later apologized for the remark.

Dobbs denounced NCLR’s use of the Lucero murder to call attention to hate crimes. Dismissing concerns about anti-immigrant rhetoric leading to hate violence, Dobbs called the groups “advocates of open borders” and mocked them for being “long on rhetoric and absolutely, absolutely devoid of facts or respect for them.”

Dobbs, who has a long track record of defaming immigrants by linking them to crime, disease and other horrors, would probably like to pretend that immigrant bashing doesn’t lead to hate crimes. But the facts of the Lucero case show otherwise. The teens implicated in Lucero’s murder specifically declared that they were going to “go jump a Mexican” and went out hunting in the ethnically diverse village of Patchogue. Latinos in Suffolk County have long reported being threatened and physically harassed and there have been other highly publicized attacks there, including the near-beating death of two Mexican day laborers in 2001 and the burning of a Mexican family’s house in 2003.

Dobbs also took issue with the idea that hate crimes targeting Latinos are a problem. Dobbs’ report cited the FBI’s annual hate crimes statistics to make the point that hate crimes nationwide had dropped from about 7,700 in 2006 to 7,600 in 2007. Dobbs claimed that hate crimes in Suffolk County had declined under Levy.

But it is widely known that the FBI’s numbers severely undercount the extent of hate crimes in America. In fact, according to a 2005 Department of Justice study, there actually are about 191,000 per year—nearly 30 times the FBI’s numbers. Most hate crimes are not reported to police and many jurisdictions do not participate in the FBI’s voluntary hate crime reporting system. Hate crimes against undocumented immigrants are particularly underreported, because of an understandable reluctance to contact state officials.

And as limited as the FBI figures are, they show that hate crimes against Latinos are on the rise, having gone up by 40% since 2003. Dobbs left out that fact .

By diminishing the importance of hate crimes, Dobbs ignored the unique threat these crimes pose. The terroristic effect of hate crime creates fear and distrust along already fragile intergroup lines in a way that other crimes do not. When a black man is dragged to his death in Jasper, Texas, it instills terror in the entire black community.

Just as he's come to the defense of Mayor Boughton with lies and distortions, Lou Dobbs couldn't resist defending Levy by using a laundry load of crap that should insult everyone's intelligence.

...MUCH MUCH more on this disgusting case later.
posted by ctblogger at 9:20 PM

In honor of thanksgiving, lets enjoy Keith Olbermann as he watches the infamous Sarah Palin turkey pardon press conference for the first time.

The Charter Commission of Danbury has released their draft version of the proposed changes to the city's charter.

I'm in the process of making a special section of this site which will be dedicated entirely to the work done by the charter revision (including video of every meeting held by the committee). In the meantime, take a look at the changes...

UPDATE: Seems to be a small problem and not all the pages are displaying properly. I'll fix it on Friday as I'm off the grid for Thanksgiving. You can still download the revisions and open it up using a PDF program.

posted by ctblogger at 3:41 PM 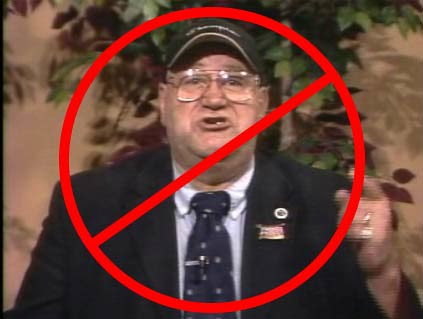 Dumb dumb is at it again...

Here's what the jackass had to say about President-Elect Barack Obama last Tuesday.

I'm in total awe seeing how many people voted for this monkey I can't believe it but that's the way it goes...

Saving me the hassle, this time, a reporter from the Fairfield Weekly nailed him.

Last week, I was flipping channels and came across Big T wearing a "McCain" hat on another public-access how, Al Bruhn's "USA TV Talk/Sport Live," and talking about President-elect Barack Obama.

Chances were he'd say something racist.

He said Obama wasn't his president and he didn't have to acknowledge him. (Fair enough; Bush II wasn't mine.) Then he said Obama swore on the Koran when he became a senator. (Not true, as a caller pointed out). Next, he said Obama was a monkey, a statement that had "nothing to do with color."

Baiting Big T is a bit of a Danbury tradition so I called in to ask how the use of a known racial slur "had nothing to do with color." Bennett said "monkey" was a random animal he picked and he could have easily called Obama a tiger. Then he said I called him a racist (which I didn't). Growing tired of arguing, I signed off by saying, "I love you." Turning up my television's volume, he responded by calling me a homosexual.

This was a pretty tame exchange — considering Bennett has been documented calling for illegal immigrants to be shot on site (repeatedly), blaming the influx of Ecuadorians in Danbury on "Jewish slave-owners" and suggesting that homosexuality can and should be cured by inserting a long needle into the brain. He's so retro, he even called Robinson a "spook" — and an "ape."

Watching Bennett spew racist comments and death threats (and then denying he ever issued racist comments or death threats) is truly laughable. It's only a matter until he screws up and gets into trouble again...and the Fairfield Weekly will be right there to document it.
posted by ctblogger at 4:27 PM