Without question, this is the dumbest ordinance proposal ever!

posted by ctblogger at 1:00 AM

(This is part one of a two part interview on immigration).
posted by ctblogger at 3:30 PM

Recently, the CT Department of Transportation announced their plans for the Meter-North Danbury Line, which includes a new station in Brookfield and extending the service to New Milford and beyond.

Aaron Boyd at the Brookfield Patch has the details:

Representatives from the Connecticut Department of Transportation (DOT) and URS engineering consultants held an information session in Brookfield Town Hall on Wednesday night to introduce four alternatives for improving the Danbury rail line. One potential option includes extending passenger service up to New Milford, which would include a stop in Brookfield.

Two possible locations in Brookfield were considered: on Pocono Road across from the fire station and on Whisconier Road on the site of the old train station, behind the Brookfield Craft Center. The early consensus is leaning toward the latter, as it would be in walking distance of the Town Center District (TCD), a proposed pedestrian business center with residential apartments surrounding Four Corners.

Extending the passenger line to New Milford would require reconstructing the tracks all the way down to Danbury, as passenger cars move at a much higher speed than the commercial trains that currently run on the line. Reconstructing 14 miles of railway, including installing parallel tracks in portions, would cost approximately $200 million, according to DOT Transportation Planner Andrew Davis, who is also the project manager on the Danbury Line Improvement Program. "You could walk faster than a passenger train could go" running on unimproved rails, Davis said.

Along with improving the existing rail, the DOT and URS are also proposing switching to electric trains, rather than diesel, which are cleaner and faster, but would cost an additional $1.5 million per mile ($21 million over 14 miles). Add to that the cost of new trains and extensive bridgework to raise at least 10 overpasses (at $10 million per bridge, by Davis' estimation), and, "It's an expensive proposition, given the condition of the tracks," Davis admitted.

The other alternatives being considered in the plan are to electrify the existing passenger service on the Danbury Line to South Norwalk. "If you're going to electrify any of it, it'd be good to go all the way to South Norwalk," in Davis' opinion, though that will depend on funding.

The Housatonic Railroad Company (HRRC), who owns the railroad right-of-way and would be key to any agreement extending the Danbury Line, recently sent out a press release stating that they are studying passenger service from Pittsfield to New York City, as well.

Though HRRC currently operates commercial trains, the company is conducting ridership studies and researching the viability of combining freight and passenger service through Western Massachusetts and Connecticut.

Although the proposals are intriguing, given the history of the DOT, lets just say that I'm not very optimistic about their proposals becoming reality (within my lifetime).
posted by ctblogger at 10:56 AM

From the land of the bigots, here's a gem of a story.

The man who owns a bounty hunting firm tracking Minuteman founder Chris Simcox is himself a former Minuteman, one who has personal beef with Simcox.

Simcox, who co-founded the Minuteman Project in 2005 to protect the U.S.-Mexico border from illegal immigrants, has been court-ordered to stay away from his ex-wife and to surrender his firearms to the Scottsdale Police Department. His ex-wife requested the order after, she says, Simcox pointed a gun at her and threatened to kill her and her children.

According to news reports, Simcox has not been officially served with the order. A spokesman for the Scottsdale PD told TPM that they have no record of Simcox turning in his weapons.

A state-licensed bounty hunting firm is now searching for Simcox. The firm, Fugitive Refugee Services, is owned by a former Minuteman himself who was booted from the group after fighting with Simcox.

Stacey O'Connell was once the director of the Minuteman Civil Defense Corps' Arizona chapter. He left in 2007 after accusing the Minutemen of misusing and hiding finances, and he has called for a criminal investigation O'Connell said Simcox's ex-wife hired him.

"I'm the perfect person that could track him down," O'Connell told TPM in a phone interview. "I know what his heart's about, I know what his soul's about ... I know where he hides out on the border."

Simcox -- who is also an erstwhile Senate candidate and a former adviser to J.D. Hayworth's Senate campaign -- could not be reached for comment.

Amid new problems with his petition signatures, today Republican Tom Herrmann announced that he's dropping out of the Congressional race.

Herrmann said in a press release that he decided to end his run due to "isolated problems with his campaign's signature collection process that will result in a shortfall in the number of validated signatures."

"Despite the hard work of dedicated volunteers and other staff throughout the district, it appears that we will not be able to satisfy the procedural requirements to be on the Republican primary ballot," Herrmann said.

"Although we collected well over the 1988 signatures required from qualified Republican voters, we do not believe enough will be validated to meet the threshold. As a business leader and elected official, I have always been committed to addressing issues practically. Contesting matters further would not serve the Republican Party or the citizens of the 4th Congressional District well."

"I am deeply grateful for the outpouring of support I've received from volunteers, donors, and voters,'' he added. "Although I am disappointed to have to discontinue the campaign, I am gratified by the public's positive response to our message of fiscal responsibility and small government. I look forward to continuing this work in other ways. I remain committed to seeing Jim Himes defeated this fall and bringing a new direction to Washington."

posted by ctblogger at 4:10 PM 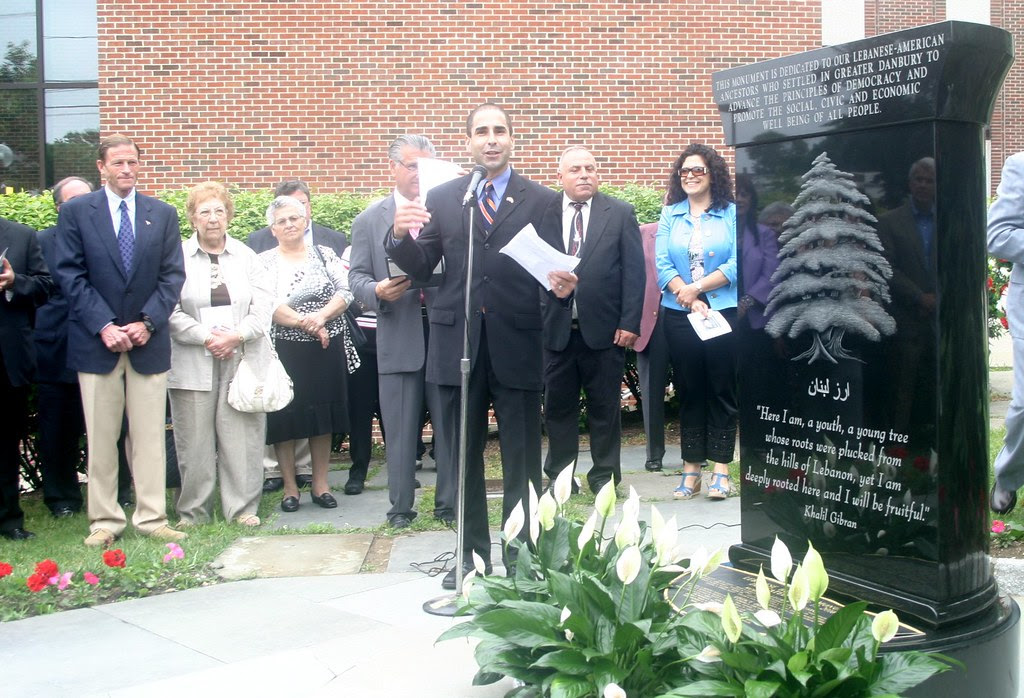 On Sunday afternoon, Lebanese-Americans from the area gathered at City Hall to witness the unveiling of monument dedicated to their contributions to Greater Danbury.

Here's video footage of the event:

posted by ctblogger at 6:42 AM