At noon today in New Britain, Congressman Chris Murphy will hold a press conference to respond to the latest television attack ad funded by the Karl Rove's American Action Network.

The live video stream start once the presser is underway.

UPDATE: Presser is over but you can still watch the videostream. HD video from the presser will be posted later today.

This tweet from the man who been running across the state talking runaway bonding and spending by state legislators... 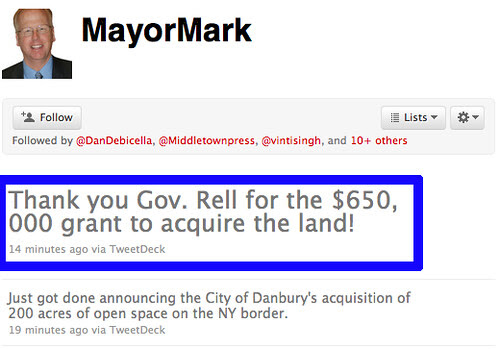 Hypocrisy is the act of pretending to have beliefs, opinions, virtues, feelings, qualities, or standards that one does not actually have. Hypocrisy involves the deception of others and is thus a kind of lie.

How can Lt. Gov candidate Boughton explain the rationale behind Mayor Boughton's accepting 650,000 dollars from the state...especially when he's been on the campaign trail screaming about runaway state spending and the need for the state to "cut, cut, cut."
posted by ctblogger at 4:24 PM

He’s vehemently opposed to a woman’s right to choose. He’s been endorsed by the radical right wing Family Institute of Connecticut. He’s campaigned with the anti-immigration United States Citizens for Immigration Law Enforcement (USCFILE), including their leader, who has said she believes President Obama is a Muslim. And he could very well be your Governor.

Tom Foley’s running mate, Danbury Mayor Mark Boughton, is one resignation away from the most radical Governor Connecticut has ever seen.

Alaska, Arizona, Kansas, New York and Connecticut all have current Governors who ascended to the top job after their running mate either resigned to take another job or resigned amidst scandal. It happens more than you think. Electing Tom Foley as Governor means Mark Boughton will be next in line should Foley leave office. Are you comfortable with someone like that leading the state of Connecticut?


Why do I have the feeling that this is not the last time Democrats will remind voters in the state about Boughton's real public record?
posted by ctblogger at 11:49 AM

This morning the Fifth District candidates had their first debate in Waterbury. One of the biggest points of contention in the debate was Chris Murphy's American Jobs Matter Act, which would steer federal contracting dollars towards manufacturers in the United States.

Caligiuri came out against that bill today.

The bill would close loopholes in laws that have been on the books since the Great Depression that are intended to help American employers.

Caligiuri's opposition surprising because it already has Republican and Democratic support in the House of Representatives and would help bring down unemployment in Connecticut, which is hovering at near 10%.

Murphy and Caligiuri have five more debates scheduled. They will spar in Danbury on Monday, October 25 at 7:30 at the Portuguese Cultural Center and I'll be there for that one.
posted by ctblogger at 4:21 PM

What was reported on Friday matches the News-Times article that was filed that night:

Danbury police confirmed that a state trooper shot and killed a motorist Friday night after a traffic stop on the eastbound side of Interstate 84 near Exit 5.

Police said the motorist fired first at the trooper, who returned fire and killed the driver.

According to State Police, the Danbury Police Department received a report of a stolen vehicle from the Food Bag convenience store. Officers quickly located the vehicle being driven by a lone white male, and a brief pursuit ensued. The subject later fled on foot and was observed by a trooper on patrol on I-84 in the area of exit 4. The subject was subsequently shot by a trooper when he was confronted with a life-threatening situation.

State Police said their investigation showed that Voute had what appeared to be a handgun, which was observed by several officers and witnesses. At one point, the weapon was directed at the trooper, who then fired a handgun, striking Voute. They said no shots were fired by Voute. His gun will be examined by the State Police Forensic Science Lab.

Seems to be a conflict in regards to what was reported on Friday night and what's being reported today.

NOTE: I was at the police station late Friday night with other reporters from the state awaiting a press conference but I had to leave by 11PM. Don't know if the presser ever happened. 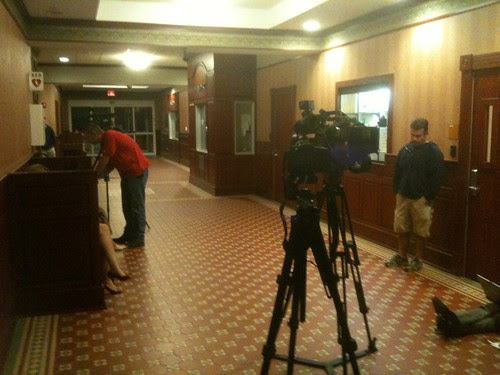 UPDATE 7:45 PM 10.10.10: WTNH has joined in highlighting the conflicting stories from this weekend.

According to an earlier published report in The News-Times of Danbury, state police were helping local police pursue a stolen vehicle and a trooper pulled the vehicle over at about 6:20 p.m. on Friday. The man allegedly fled the car, and police told The News-Times he fired a gun at the trooper. Police say the man was killed when the trooper returned fire.

The Hartford Courant also reported that a state police officer shot and killed a motorist after a routine traffic stop turned deadly. The newspaper says the motorist fired on the trooper, who returned fire Friday evening.

The trooper, who has not been identified at this time, was treated and released from Danbury Hospital for minor injuries.