Godfrey given a laundry list of responsibilities for next year 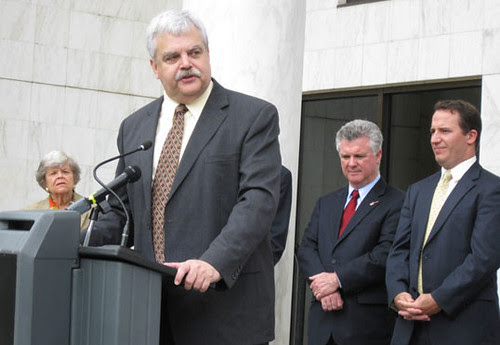 Yesterday, State House Speaker Chris Donovan released his list of appointments and committee assignments for the next legislative session and State Rep. Bob Godfrey will retain his position of Deputy Speaker of the House.

“Bob Godfrey is the ‘go-to guy’ whenever there’s a technical question about procedures or legislative precedent,” Donovan explained. “In addition to his broad grasp of the issues of the day, he has been a top notch leader, moderating debates in the House in a fair, evenhanded manner. There’s no question that he’s well respected both in his hometown of Danbury and at the State Capitol in Hartford . I thank him for accepting the role again.”

“There’s no question that our state is facing many challenges right now. My number one priorities will be to assist the legislature in passing legislation that will create new jobs in the state, maintain the ones that are currently here, and grow the economy,” Godfrey said. “I’d like to thank the Speaker for asking me to serve in this role and I look forward to working in a bipartisan manner as we meet to tackle these issues.”

To say that Godfrey has a full plate of responsibilities is an understatement. Besides being Deputy Speaker, Godfrey will also serve as a member of the Judiciary, Government Administration & Elections, and Legislative Management committees as well as the head the chairman of the Council of State Governments (CSG), a non partisan group of state officials from all 50 states.

“The Council of State Governments is one of the top resources for law and policy makers from around the country. We can use them when we’re crafting laws, policies and regulations that are fiscally sound and produce the best results, often because another state has already tried it out,” Godfrey said. “Through thorough, comprehensive, nonpartisan research, CSG provides states and member jurisdictions with concise information.”

Godfrey remarked, “Having access to CSG puts Connecticut in the forefront of advocacy among the states. I particularly look forward to working with Governor-elect Malloy, his incoming administration and my colleagues as Connecticut upgrades its relations with our federal government. We’ll have a greater voice and be more competitive nationally.”

It was rumored that the state lawmaker for the 110th district would run for state auditor but that will not be the case.
posted by ctblogger at 12:36 PM

posted by ctblogger at 6:25 PM 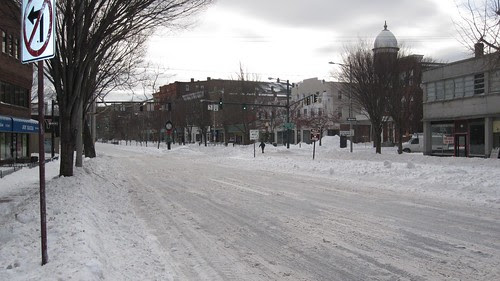 I don't know what was worse, the rate at which the snow came down or the fact that the wind was blowing the snow all over the place.

Today, I grabbed my camera and took a real quick trip downtown to see the carnage left by the storm. I rigged my camera to my dashboard and shot this small footage while on the road...

(footage shot at 11AM on Main, West, and White Street/Newtown Rd)

UPDATE: YouTube user viana1971usa posted this video of his/her trip around the White Street/Hospital Ave area. It seems like this footage was taken around the same time I shot my video...

Unless you been living in a cave your entire life, you should know that cars should NOT be parked on the roads tonight. The city is under a level 1 emergency so try and really limit your driving today.

Snow estimates are anywhere from 12 to 15 inches so take the weather seriously and allow the snow plowers to do their job without having to deal with your car on the road.

I'll venture around the city and shoot some video for everyone later...

UPDATE: Traveling on the streets is officially banned.

Mayor Mark Boughton declared a Level 3 snow emergency late Sunday afternoon, banning travel on city streets and opening the Patriot Garage to vehicle owners who have no place to park.

As of 7:30 p.m. Sunday, only emergency personnel, emergency vehicles and four-wheel drive vehicles will be allowed to operate in the city.

The mayor said Danbury police will be ticketing other motorists, as well as those who fail to get their cars off the streets so plows can do their jobs.

The snow emergency will remain in effect until 7 a.m. Monday, Boughton said.

Take it from someone who went to the store earlier today (and I own an all wheel drive car), the roads are BAD. Do yourself a favor and stay inside...

UPDATE 10:30: Just ventured outside and the wind is really kicking up the snow all over the place...and there is a possibility of a two feet dumping in some areas of the state when this is all over.

Blizzard warnings are in effect and currently I’m forecasting 12″-18″ for most of Connecticut with slightly lower amounts (10″-15″) in southeastern Connecticut. Someone could see 20″ especially in Litchfield County.

The surface low, 850mb low, and 700mb low are tracking perfectly for a major snowstorm in Connecticut. Ideal. Mesoscale banding and strong mid level frontogenesis is going to produce a band of crushing snow this evening. It’s going to be exceptionally impressive for a period of time.

2 feet is possible somewhere but I’m not sure where yet.

posted by ctblogger at 1:06 PM