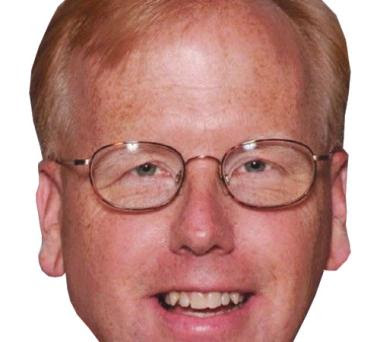 Danbury Mayor Mark Boughton, a Republican who lost his bid for lieutenant governor in the November election, said he did not watch television coverage of [Dannel Malloy's] inauguration Wednesday because he was too busy with city business.

Timothy Stewart, the only Republican elected as mayor four consecutive times in this heavily Democratic city, wants to go to the state Senate.

Stewart announced Friday that he will run for the 6th Senate District in a Feb. 22 special election to add a conservative voice at the Capitol.

"We need his boldness, his thoughtfulness on how to run state government," said state Sen. Len Fasano, R-East Haven, who along with Danbury Mayor Mark Boughton traveled to New Britain for Stewart's announcement.

So, on one hand, Boughton was too busy "with city business, to watch Gov. Malloy's inauguration speech to the General Assembly YET he found time to travel IN A SNOW STORM from Danbury to New Britain for a partisan political presser.

This case has gone from bad to REAL bad.

Unfortunately, I couldn't make it to Danbury Superior Court, but according to the recent write-up on the case by the News-Times, I didn't miss that much since Grant failed to appear in court, which was a BIG mistake.

In a bit of irony, Troy Grant failed to appear Friday at a hearing on his defense attorney's motion to withdraw from the case in which the beleaguered former youth counselor faces multiple charges of sexual assault.

Grant, 41, had pleaded not guilty to the charges and was free on bail, but when he didn't show up to court on Friday the judge raised his bond to $750,000 from $300,000 and issued a rearrest order, according to Grant's lawyer, James Diamond.

"He (Grant) failed to appear in court. His bond was called and forfeited," Diamond said. "The motion would not be heard."

In the motion he filed at Danbury Superior Court, Diamond said his attorney-client relationship with Grant had "broken down irretrievably." He also claimed his client had "failed to honor the retainer agreement."

Grant not showing up in court today was idiotic to say the least. Now his bond is increased to a quarter million dollars and the judge issued his re-arrest. Given the time he faces if convicted, and the fact that his attorney wants nothing to do with him, lets just say that 2011 isn't going well for Grant.

In memory of William Ratchford 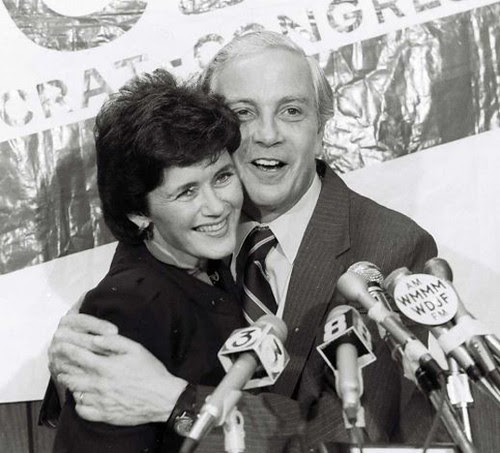 With the passing of Congressman William Ratchford, I left it was important to do a television show in his memory...and last night we did just that.

On last night's edition of the Marty Heiser Show, I assisted in assembling a lineup of friends and colleagues of Danbury native who talked about Ratchford and his everlasting legacy.


I'd like to thank the following for sharing their memories of Bill.

posted by ctblogger at 5:06 PM

The Bethel Patch has the details:

At Tuesday's Board of Selectmen meeting, First Selectman Matthew Knickerbocker revealed the priority list of Phase I of the Road Renewal Plan for 2011. Roads were chose based on input from both town fire departments, the police department and the highway department.

Though the approved plan allocates bonding $2 million for 2011, the estimated cost to fix the roads listed would cost just more than $2.6 million. Knickerbocker said, "We may not get to all of them, but we'll do as much as we can until the money runs out." 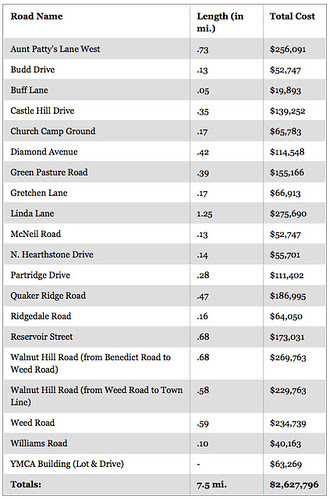 posted by ctblogger at 8:08 PM

The lobby to protect municipal aid begins...and what this means for Danbury

Christine Stuart over at CTNewsJunkie has a great write-up regarding the efforts being made at the Capitol to protect state's aid to municipalities.

The Connecticut Conference of Municipalities made clear Monday that cuts in municipal aid will simply shift the tax burden to local property taxpayers across the state. But with Malloy, a former president of the organization as governor, the group is optimistic that their message will resonate this year.

“We recognize it’s going to be a tough session,” Kevin Maloney, spokesman for CCM, said Monday. “Certainly municipal aid is such a big part of every budget that it’s going to be looked to, but we have a new governor,” whose budget director, Ben Barnes, used to work for the organization.

“We think this is the time where our message is going to resonate that any cuts to cities and towns only result in increases in property taxes and cuts in local services,” Maloney added.

When it comes Danbury's upcoming budget, preserving state aid to municipalities is going to be paramount as any decrease in aid will result in a burden being shifted from the state level to the local level, and the first area that will be probably hit if aid is decreased is education.

On the campaign trail Malloy promised make sure the state funded its share of the Education Cost Sharing grant. But it will be a daunting task as the state has projected a more than $3.67 billion budget deficit.

Last year the state covered about 42 percent of school funding while local districts paid more than 52 percent. The states ability to cover 42 percent of school costs was due in part to the approximately $270 million in federal stimulus funds that won’t be there in 2011.

Given that Gov-Elect Malloy plans to adhere to Generally Accepted Accounting Principles (GAAP) once sworn into office on Wednesday, which could result in the state deficit number increasing by 1 billion dollars, keeping state aid to municipalities will be a daunting task for the new gubernatorial administration...and any decrease in aid could have a detrimental impact of Danbury's upcoming budget.

For those new to the area, click here to read Congressman Ratchford's bio.

Bill Ratchford's passing this morning is sad for me personally and marks a loss for the people of Connecticut.

I got my start in politics working for Bill Ratchford. As a college student, I worked in his unsuccessful 1974 campaign for Congress, and managed his campaign in 1978 when he won the seat.

As House Speaker in the Connecticut General Assembly in the late 1960s, Bill Ratchford was an early advocate for high ethical standards and transparency in government. As a state legislator and congressman, he stood up to protect working families, the environment, and consumers. Finally, he was a kind, compassionate man, committed to his wife, Barbara, and to his family, who saw in public service the opportunity to help his community and enrich the lives of others. He will be missed.

Bill Ratchford's advocacy for the elderly and his commitment to public service built a legacy that will live on in Danbury and communities across Connecticut. Shortly after I was sworn in to office, Bill came by to share some of his wisdom about the House of Representatives. More than twenty years had passed since he served in this seat, but his enthusiasm for policy and his passion for the people of Connecticut were just as strong as ever. He will be terribly missed, and my thoughts and prayers are with his wife Barbara and his family at this time.

posted by ctblogger at 2:55 PM