Yeah, I know...I didn't report on the budget.

Yeah, I know...I didn't report on the recent rash of outrageous (and highly misleading) statements from our laughable mayor and his ilk.

Yeah, I know...I didn't talk about the Board of Education lack of spine in wake of Boughton's outrageous budget allocation to the schools.

I'm still knee deep in writing my senior thesis so ALL bloggging has come to a standstill. Reporting on the zoo-like atmosphere in Danbury (where politicians get away with just about anything) is never-ending and will be around after I finish writing my project. Thankfully there's light at the end of the tunnel and I should be back to full speed in about a week (give or take).
posted by ctblogger at 1:43 PM 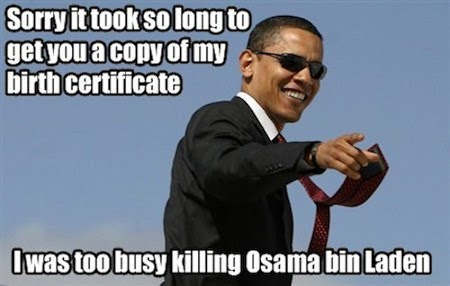 The number of Americans saying President Obama was born in another country has been sliced in half, according to a new Washington Post poll.

In interviews following the public release the president’s “long-form” birth certificate last week, fully 70 percent of Americans say Obama was born in Hawaii, a big bump-up from the 48 percent who said so a year ago. Even more say he was U.S.-born, or call that their best guess, for a total of 86 percent.

Overall, 10 percent of Americans say Obama was likely born abroad, down from 20 percent in an April 2010 Post-ABC poll. Almost all those who now say Obama was born in a foreign country say that it’s only their “suspicion;” just 1 percent claim “solid evidence” that the president was born elsewhere (9 percent said so last year). 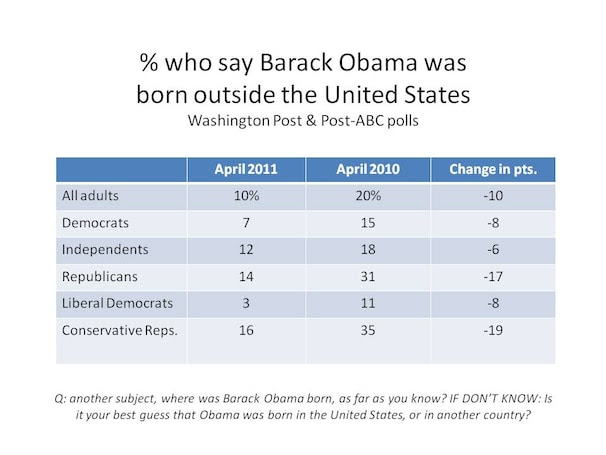 DANBURY – Today, Congressman Chris Murphy, Danbury Mayor Mark D. Boughton, Senator Joe Lieberman and Senator Richard Blumenthal announced that a compromise has been reached to build an Armed Forces Reserve Center in Danbury. The agreement will ensure that the Reserve Center is built with minimal impact on town open space.

The compromise includes three major changes from the Army's original plan. First, over 500 vehicles and trailers were removed from the project, which allowed the vehicle maintenance center and military parking to be dramatically reduced. This halves the project's overall size, removing the bulk of the truck traffic that had caused concerns among residents. Second, the remaining footprint of the training facility will be built only on the south side of Wooster Heights Road, preserving the landmark northern meadow of the Lee Farm property. This property will be available for a future open space purchase. Third, the Army has agreed that bids containing project labor agreements (PLA's) will be given additional consideration, thereby dramatically increasing the chances that local workers will be hired for the project.

But, most importantly, Danbury-area reservists and guardsmen – who are currently using outdated facilities across the state – will experience a significant upgrade. And the $45 million project will create hundreds of construction jobs in the short run, and many more in the local hospitality and retail sectors in the long run.

Since the Army announced their intention to site the facility in Danbury that would combine Reserve units from Fairfield, Waterbury and Danbury and Connecticut National Guard units from Naugatuck and Norwalk, Murphy, Lieberman, Blumenthal and Boughton have been working with the Army to modify the original proposal so that the final project made the most sense for both the local community and the Reservists and Guardsmen who will utilize it. The new scaled-down project represents a 40 percent reduction in acreage and a 52 percent reduction in the military personnel who will be drilling at the location on weekends.

Senator Joseph I. Lieberman
“This is great news for our National Guard and Reservists, as well as Danbury. Having successfully amended the 2005 Base Realignment and Closure (BRAC) law after years of being unable to find an adequate site based on restrictive requirements, I am extremely pleased to see such significant progress on this worthwhile project. Our men and women who are continually preparing to serve in harm’s way deserve this state of the art center replacing the obsolete facilities closed by BRAC.”

Senator Richard Blumenthal
“Today's compromise moves the Army a crucial step closer to the facility it needs and deserves for Reservists patriotic service our nation. Community concerns were heard and addressed, but this compromise also reflects the community's patriotism and public spirit in heeding our military's significant responsibilities. Both sides yielded, as happens in any good agreement. My hope is that this critical compromise will prevent any additional delay for the Army to construct a project important to national security - along with job creation and economic vitality in the region.”

Congressman Chris Murphy
“This is a compromise that weighs the needs of the Army with the goals of the community. It was not easy to pull everyone together on this, but after listening to everyone involved, we all worked together and got it done. Now we can look forward to better facilities for our reservists and hundreds of new jobs for our community.”

Deputy Assistant Secretary of the Army
for Installations, Housing, and Partnerships Joseph Calcara
“This is the right solution at the right location. The Army has worked extremely hard in partnership with Rep. Murphy, Senator Lieberman, and Senator Blumenthal to sort through a variety of land use and siting issues. This is a great example of everyone working together to meet the needs of our soldiers through collaboration with the local residents and their elected officials.”

Danbury Mayor Mark D. Boughton
“This has been a lengthy, challenging process. Today I am more satisfied with the Army's plan than I was at the outset. Am I perfectly satisfied? Probably not. But the Army has reduced the scope of its original plan and has listened to our overall comments. They have worked with us on reducing their impact on the neighborhood. This is most important.

“Certainly their building will look fine. The landscaping will be attractive. And, our traffic flow concerns will be addressed. It is my sense that they genuinely do want to be good neighbors.

“Additionally, we are pleased to hear that they anticipate conducting a public meeting where residents can hear their plan directly.”

Danbury City Council Minority Leader Thomas Saadi
“I commend Congressman Murphy for his successful efforts in this matter and fully support this compromise which is a win for all involved. The Army has responded to the concerns of residents and local officials by downsizing the project. This compromise will leave the upper parcel of Lee Farm in pristine condition, reduce noise and traffic while allowing the construction of a much needed new Army Reserve center in Danbury which will generate much needed local jobs and support area restaurants, hotels and stores.”

Danbury City Council President Joe Cavo
“I want to thank Congressman Murphy, Mayor Boughton, and the entire site selection term for this project. This will be a terrific addition to our city and will provide jobs for our residents. I look forward to a positive relationship with the Army and with the federal government.”

There will be a public information session on the project on Monday, May 9, 2011 at 11 am at the Catholic War Veterans Hall located at 2 Shalvoys Lane to address further details of the project.

Sixth Ward Councilmen Paul Rotello and Benjamin Chianese are pleased Congressman Chris Murphy has responded to their concerns and those of their constituents, and successfully petitioned the U.S. Army to remove from consideration large scale industrial type development in sensitive sixth ward areas.

The councilmen spent over a year on this important issue, working with local, state and federal officials and area groups concerned with the impact such development would have on Danbury’s dwindling open space, overall city finances and residential neighborhoods in their ward.

Councilmen Rotello and Chianese also looked at sites throughout Danbury, including those in the sixth, ultimately proposing several alternatives they felt were better suited to the needs of the Army.

“From the very beginning the parties were clear in their opposition to any project that would damage the north meadows,” Rotello said, “and we proceeded with that in mind, placing before officials additional sites and proposals.”

That work has culminated in today’s announcement of a vastly scaled down project that ends the threat of construction on the open fields above Fry’s corner in the sixth ward.

“We look forward to welcoming the U.S. Army into our city and their transition into our community,” Chianese said, adding, “now that the proposed reserve center has been scaled down, we need to continue working on the plan to protect the Lee Farm meadows from over development.”

In addition to Congressman Murphy and his staff, Rotello and Chianese went on to thank the Friends of Lee Farm, the residents of Wooster Heights and the members of the Tri-Community Homeowner’s Association, all based in and around Danbury’s sixth ward, for their “invaluable insight and support.”

posted by ctblogger at 7:23 PM 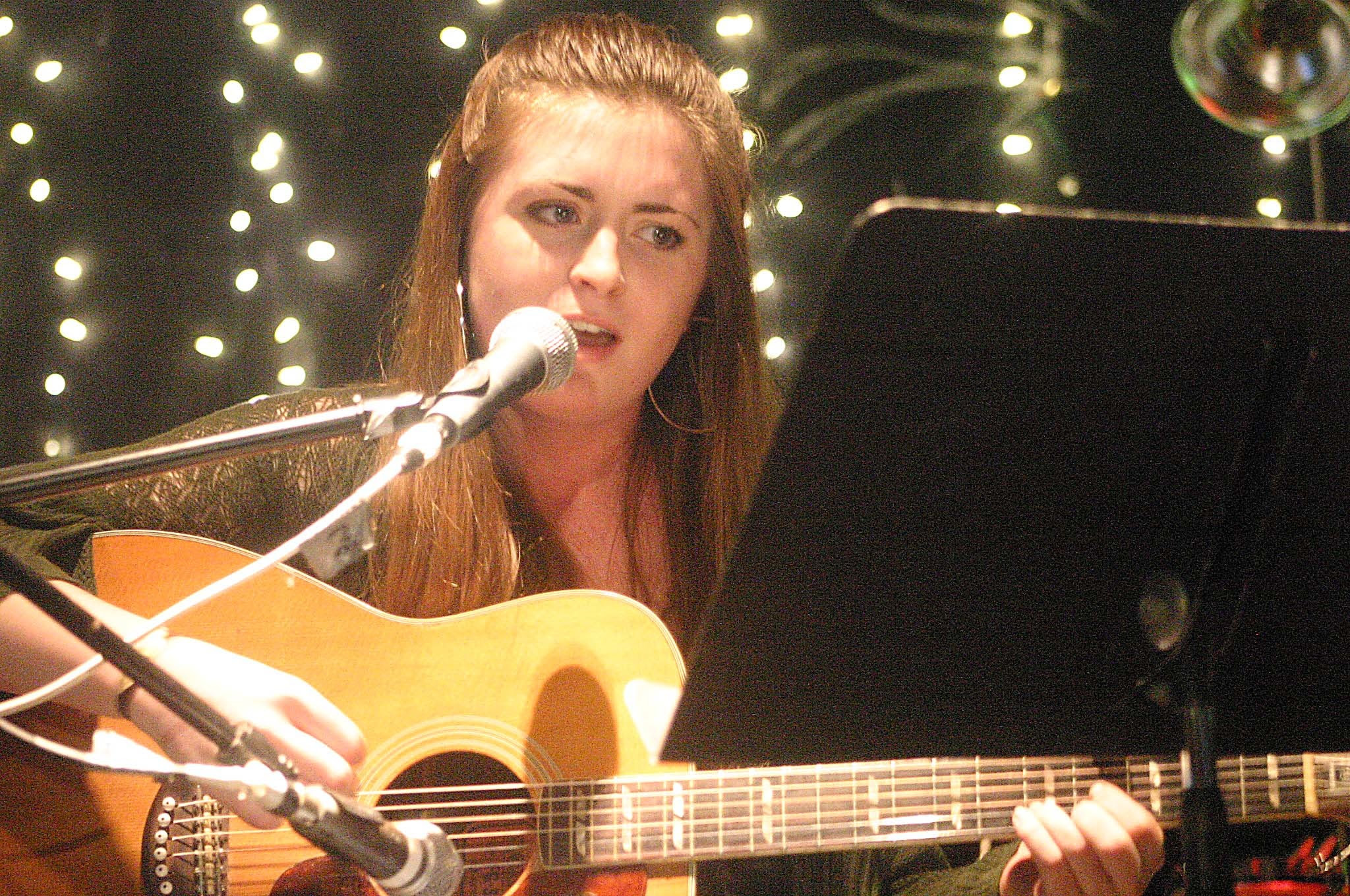 Since I'm still in writing mode, I decided dig into my video vault and to show off some of my latest stuff I shot with new Canon 7D camera.