Tonight Thursday at 9PM on Comcast channel 23, Danbury Whalers new head coach Phil Esposito is scheduled to be a guest on the Marty Heiser show and will answer questions regarding the future of the hockey franchise.

UPDATE: Here's the replay of the interview.

posted by ctblogger at 4:55 PM

So much for the laughable claim that temperature at the police station never raises above 73 degrees.

Since the opening of the new building, there have been a laundry list of issues with the new building...and the most talked about complaint among rank and file members of the department centers on the high temperature conditions at the station.

During this month's City Council meeting, Democrats Tom Saadi, Paul Rotello, and Fred Visconti addressed the police station temperature problem with Public Works Director Antonio Iadarola in which he repeatedly claimed that the temperature in the building has never risen above 73 degrees.

Iadarola (at 1:49 of the video): "I see a couple of emails flying around of some temp readings, let me just tell you…I have a sensor in every room and by computer I can determine what the temp is. There is no temp in any part of that building that was over 73 degrees."


To say that Iadarola's comment angered members of the police force who are forced to endure the high temperatures in the building would be an understatement. To prove that the Public Works Director wasn't being honest with the public, here's an image of the temperature reading in one room at the station shot days before the city council meeting...and it clearly shows that the temp is at 80 degrees! 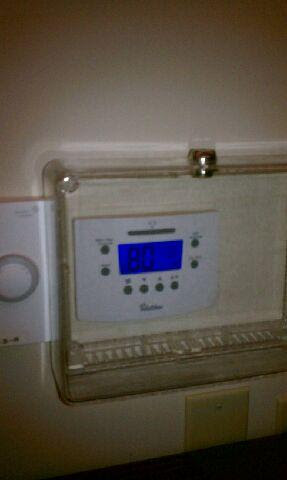 Oh yeah...the image was shot in the evening.

Trust me, this is just the tip of the icebreg...MUCH MUCH more to come.

UPDATE: Someone emailed me asking why the image looks pixelated. It's because I enlarged the to fill the width of the column and it was taken with an older cellphone.

Here's the image in it's original size.

More images and documents to come...
posted by ctblogger at 11:56 AM

This is a correction to an earlier blog post, which I thought would correct some allegedly mistaken information I’d put into a June 14 story about a federal program called “Secure Communities” that has stirred up lots of controversy among undocumented immigrants and civil rights activists.

Unfortunately, the original story was right and I have Danbury Mayor Mark Boughton to thank for this screwy situation where I’m correcting an incorrect correction.

In that Secure Communities story, I mentioned a Danbury police sting operation that picked up 11 immigrants, saying “police arrested the 11 men and turned them over to federal immigration agents.” The case resulted in a 2007 civil rights lawsuit against the city and U.S. Immigration and Customs Enforcement officials on behalf of those immigrant workers.

Boughton, anti-illegal immigrant crusader and last year’s unsuccessful Republican candidate for lieutenant governor, emailed me saying I was mistaken, arguing that two different immigration courts had ruled the men “were not arrested by Danbury Police Department, they were arrested by [U.S.] Immigration and Customs Enforcement.”

The problem with his statement is that, according to sworn depositions by Danbury cops, ICE agents, booking records and news reports, Danbury police did in fact arrest those 11 guys and then turned them over to ICE, which also arrested them on federal charges.

Danbury cops testified in their depositions that the 11 men were taken into custody - by Danbury police - for alleged traffic violations.

But the 11 men were apparently never booked for any traffic violations. They were charged by Danbury police with illegal entry into the United States, and later turned over to ICE agents.

According to Wishnie, booking records show the men weren’t turned over to federal officials until two hours after they were booked by Danbury cops.

In his deposition, ICE Agent James Brown also contradicted Boughton’s insistent claims that the alleged non-sting operation was a federal operation that Danbury police simply helped out with.

“He (Boughton) said the city did not order the operation, that ICE was already on the way. That is not correct, not for this activity,” Brown said.

Danbury Police Lt. James Fisher testified under oath that the arrest of those immigrants was initiated by Danbury cops, and ICE agreed to help only after the third or fourth request from the city. He said the operation came about as a result of pressure from Boughton for police to take action against the immigrant workers.

Hopefully more reporters will take a look at Boughton's long history of misleading the public about elements of the Danbury 11 case.
posted by ctblogger at 11:37 AM