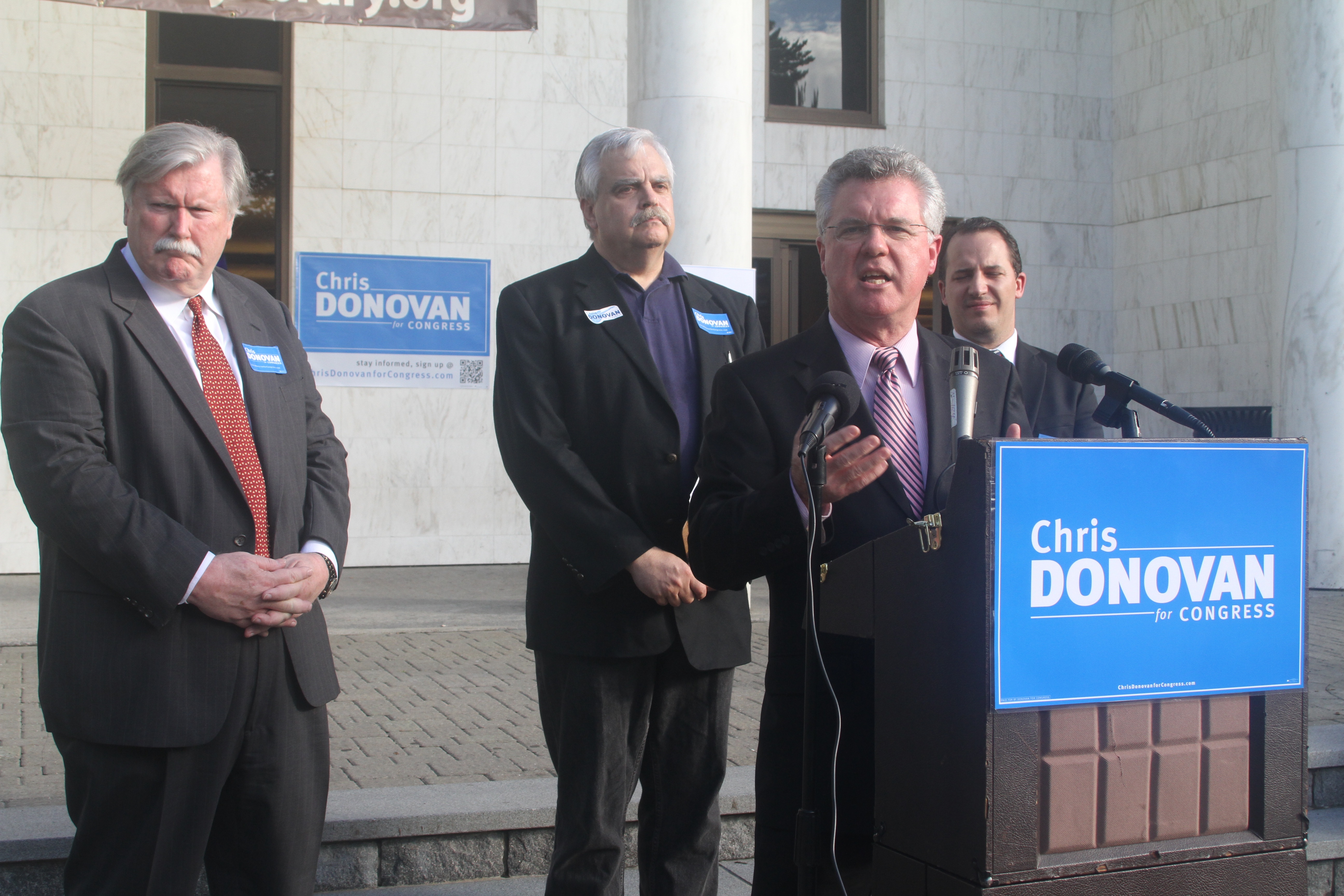 Yesterday, Chris Donovan paid a visit to my neck of the woods in Danbury to officially announce his candidacy for Congress.

Donovan has been unofficially running for Chris Murphy's 5th Congressional seat since May, but he is kicking off his campaign this week with stops at cities across the district. He visited Waterbury and Torrington Wednesday, Danbury Thursday, and he will visit Meriden Friday and New Britain Saturday.

"My whole life has been dedicated to seeing that people are taken care of," said Donovan, who represented Meriden in the state legislature for 18 years. Since 2009, he served as speaker of the house.

Donovan said his work in the state legislature showed he can work with both Republicans and Democrats. He said his work on campaign finance reform under a Republican governor led to legislation that made it possible, "so everyone can afford to run for office."

Donovan spoke to a group of about 50 democrats, including former Town Committee chairmen Bernard Gallo and Joe DaSilva. Lynn Taborsak, who is both the Democratic Town Committee Chairman and the democratic candidate for mayor, also attended, as did former Fifth District Congressman Jim Maloney.

To all the whining local politicians...

...this commentary from Jeff Mill for the Middletown Press is for you.

In the wake of Tropical Storm Irene, three distinct sounds rose up into the still late summer air: chainsaws, generators - and whining.

Chainsaws were put to a practical use, clearing away debris left by the storm, while generators kept homes and businesses connected to the 21st century.

But the whining? The whining came from too many people with a too-important sense of themselves and too little awareness of the difference between an inconvenience and a true crisis.

Yes, hundreds of thousands of people lost power, some for a few hours, others for a few days. If your family has a person with a severe medical condition or a new-born child, that could be a matter of concern.

But in virtually every town in the region, arrangements were made for people to take shelter, or to take showers, obtain water and even food. Those who feel they must remain connected to their various PDAs and notebooks could even charge up their devices.

And, crucially, the weather cooperated; it has been one of the most pleasant weeks of all year.

As one veteran observer of the foibles of Connecticut residents noted perceptively this past week that what happened in the wake of Irene was a temporary inconvenience.

But that hasn't stopped a constant buzz from a vocal minority demanding that they get their power back NOW!

In Madison on Friday, police had to be called when some of the residents of one of the tonier precincts in that tony town unleashed verbal abuse on a CL&P crew demanding that their power be restored immediately and making ludicrous references to how much the good people pay in taxes.

Elsewhere, some other self-important people have castigated utility crews, including some of from out of state who left their homes and hearths to help out the residents of Connecticut.

Instead of a well-deserved "thank you," unfortunately some of the visiting crews found themselves on the receiving end of another greeting that ends in "you."

In some parts of the state, police officers have been stationed at staging area for utility crews to ward off would-be abusers.

And all because of why exactly? Because they are missing the latest episodes of "Real Housewives of Beverly Hills"? Or because they can't get the latest breaking news on the foibles of LiLo?

A scant hundred miles or so north of here, residents in southern Vermont and portions of New York's Adirondack Mountains are coping with real problems. Rampaging creeks have washed out roads in both areas and isolated communities.

While not rising to the level of a crisis, the devastation suffered in those two areas should put the whiners of Connecticut to shame. Should be probably won't.

Make sure to go to Mill's site and read his entire write-up...maybe someone should email this commentary to our narcissistic part-time mayor and disgraceful state senator who are still criticizing CL&P and Governor Malloy over the response to the hurricane.
posted by ctblogger at 4:28 PM