Don't believe the hype or excuses

Here's the word in the street for the last couple of weeks...

1. Boughton puts on a big show at fire headquarters announcing that the city is on line for a federal grant that will be used to hire 12-14 new firefighters.

3. Boughton goes into pissy mode and rejects the federal grant.

4. Media FINALLY catches up to the story (you're welcomed) nd the Boughton is caught with his pants down and forced to make up shit to explain why he rejected the contract.

5. Several members of the council are left in the complete dark and are pissed.

6. I apologize to the countless members of the fire department for not having the time to report on this story earlier...life is kind of crazy right now.

Get the popcorn ready...maybe the memebrs of the firefighter union can ask Murphy to borrow the Boughton rat...
posted by ctblogger at 5:58 PM

"What's that Dirk? NO, NO, I'm selling my home...it's not like I have a buyer or I'm planning on signing the warranty deed to the home on Election day or anything..."

It seems like 2nd ward Charles Trombetta's LIES have finally caught up to him.

Throughout last year's municipal election, it was widely speculated that the city councilman for the 2nd ward was planning to move out of his home after last fall's election. This would allow the Republican Town Committee (a.k.a. Mayor Boughton) to appoint another hand-picked, rubber-stamped pawn to occupy the council seat as opposed to having Trombetta step down or run at large and run a new candidate for the seat last year. Several sources went as far as to allege that Trombetta was asked to push off the closing of his home till after the election in order to avoid any controversy.

As the concerns over Trombetta's future residency intensified, on November 4th, News-Times reporter Dirk Perrefort interviewed the councilman in order to get his take on the situation.

Charles Trombetta, a City Council member from the 2nd Ward, said recently that he is selling his home but hopes to stay in the district.

Trombetta, a Republican council member for four terms who is seeking re-election next week, said the house has been on the market for some time and that he and his wife are downsizing because their children have moved on.

When the house sells, Trombetta said, he and his wife plan to move in with his sister-in-law, who also lives in the 2nd Ward, until they find a new home of their own.

"While I would like to stay in the 2nd Ward and close to my business, but I can't guarantee where we will find a house," Trombetta said.

He added, however, that because he is legally blind and has to depend on others for rides to work, the closer he is to his office, the better.

To recap, on NOVEMBER 4th, Trombetta told the News-Times that:

Predictably, after the election, Trombetta announced that he's bolting from Danbury and when interview again by the same reporter, the now former councilman had a slightly different change of tune...

Charles Trombetta confirmed Wednesday he has moved out of Danbury -- at least temporarily -- and has resigned his position on the City Council.

Trombetta, a Republican who has served on the Council since 2003, said he is renting an apartment in Stamford.

"Right now we are looking for a home in both places, but I can't guarantee that I'll be living in Danbury, so I thought it best to resign," Trombetta said.

He moved about a month ago to be closer to a sick relative and to a restaurant he owns in Stamford, he said.

Trombetta said the closing on his former residence on Wellington Court occurred Nov. 15, about a week after the election.

Seeing that he's now in Stamford (and gave NO indication that he was planning on moving to Stamford when first questioned by the News-Times back in Nov), so much for wanting to work "closer to his office" in order to avoid relying on people to transport him to work in Danbury excuse.

Not surprisingly, Trombetta wasn't completely truthful with the News-Times or the residents in the 2nd ward when it came to his true intentions...and unfortunately for Trombetta, a paper trail exist that further exposes the councilman's dishonesty.

Days ago, I did some investigating into the Trombetta matter and obtained a few documents related to the situation that should raise some eyebrows.

As every homeowner knows, when you sell a home there are certain documents that are filed at City Hall. Specifically, Trombetta is required to sign a warranty deed at closing in order to transfer ownership of a home from one individual to another.

Take a look at the date when Trombetta signed the document (page 3 in the above pdf file): 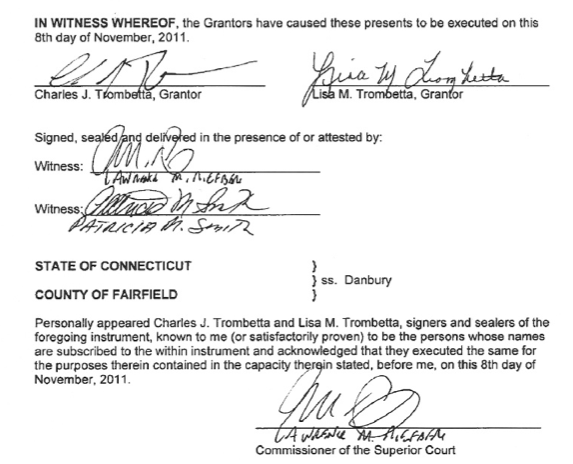 Trombetta signed the warranty deed on NOVEMBER 8 2011, which happens to be on Election Day.

After talking to several attorneys who deal with home closings, I learned that it's fairly common for a seller to sign off on a deed and hand it to his/her attorney who would finish the transaction with the buyer without the seller needing to be present at the actual closing. Now, Trombetta could have signed the document and handed it to his attorney who could in turn finish the closing on the 15th, BUT in his interview with News-Times reporter Perrefort back in November, Trombetta never indicated that he found a buyer and days away from fulfilling his home closing obligation; Trombetta only stated that he was "selling his home", that "the house has been on the market for some time" and, "when the house sells" was he planned on moving to a home close to his job in the 2nd ward because, "he is legally blind and has to depend on others for rides to work, the closer he is to his office, the better." 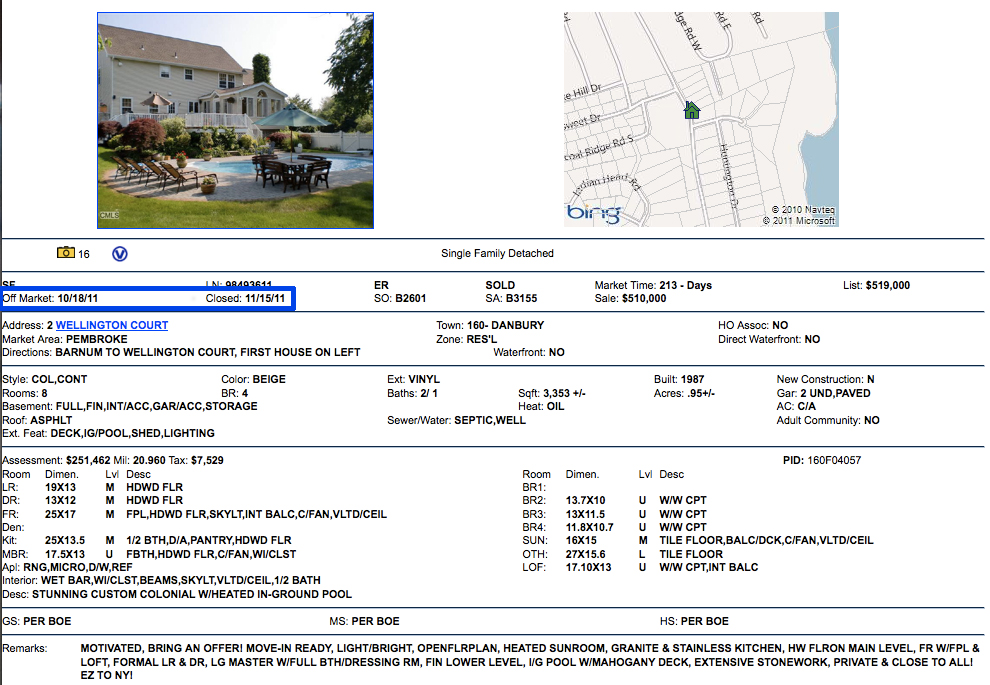 Above is a screenshot of a data base report of home Trombetta sold at 2 Wellington Court (realtors use this database in determining the status of properties that are for sale). Take note of the section of the report that notes the property's closing date (Nov 15) as well as the off-market date (October 18). As you can see, Trombetta had a buyer for the property as early as Oct 18th as the off-market date is an indicator for realtors to avoid showing the home to other buyers (e.g., an offer was accepted on the home).