Earth to Mark Nolan, if you're going to carry the mayor's water, at least be honest about what you're talking about 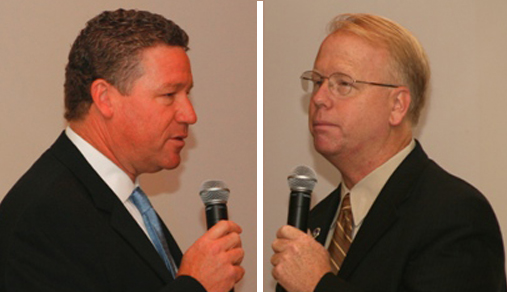 Nolan carries the water for his man…and fails miserably

It's nice (and predictable) to see Danbury Housing Partnership chairman Mark Nolan carry the water for Mark Boughton's failed 10 year plan to end homelessness…it's equally predictable to see Nolan lie to the public about the essence of the plan in an effort to defend this dishonest mayor against well-deserved criticism.

Here's what the water carrier had to say about those who say Boughton has not followed the objectives in his plan to end homelessness.

Danbury has nearly enough beds during the winter to house its homeless, Taborsak said, but come April 15, only one shelter remains open. That means with only 22 beds for the summer months and a citywide homeless population estimated at 150 people, about 130 people have become "lawn ornaments," Taborsak said. Her goal is to meet the city's plan for ending homelessness by 2016.

"We've all but abandoned the heart of the city's 10-year plan," Taborsak said.

Nolan disagreed, saying the "heart" of the plan isn't to build housing. That's a developer's job. The plan is designed to identify who is homeless and figure out who can help that person move into a home, if they so desire.

What Nolan did was simply recycle Boughton's dishonest and misleading statement about regarding the REAL objective of the city's plan to end homelessness…but don't take it from me, just read the homelessness plan document for yourself.

On a given night in January 2005, there were three hundred twenty one (321) homeless individuals or heads of household counted in Danbury. Teens,senior citizens, veterans, the mentally disabled and others were included in the count. Homeless children (of which there were an additional 69) are not reﬂected in that number. The 321 counted included 47 families; 8 unaccompanied teens under18 years of age; 17 young adults between the ages of 18-24 and 249 individuals.

The National Alliance to End Homelessness reports that approximately 750,000 people are homeless on any given night in the United States and between 2.5million and 3.5 million will experience homelessness at some time over the course of a year. The United States Interagency Council onHomelessness has been supporting and encouraging states and communities across the nation to develop adopt and implement 10 YearPlans to End Homelessness. Connecticut is in line with other States in the nation dedicating resources to End Homelessness. Governor Rell established the Interagency Council on Supportive Housing andHomelessness. Relying on their recommendations,the Governor was able to secure legislative and ﬁnancial support to move these efforts forward.

Mayor Mark D. Boughton charged a Task Force with creating and presenting a comprehensive plan to end homelessness in 10 years. This proved to be a great opportunity on many fronts. The multidisciplinary representation allowed the many understandings of homelessness and its solutions to be shared and considered. The plan required examination of the institutional or philosophical beliefs that were useful in managing homelessness but will not move us forward as we strive to end it. The planning process has been cause to assess utilization of resources, explore best practices, develop community-driven strategies and adopt a vision for ending homelessness with stable permanent housing as the goal. The development of the plan also resulted in an understanding that the other planning bodies and planning studies that have been completed seek to create the same opportunities for people while respecting both the natural resources and the distinctive neighborhoods of each of the communities.

This plan provides the community with four major objectives towards ending homelessness and speciﬁc recommendations to achieve those. Those objectives are:

I. Increase the supply of permanent housing units to meet the projected need of homeless persons.

III. Ensure that there are adequate, appropriate and sufﬁcient services to assist homeless or at risk persons in accessing and retaining housing.

IV. Develop a strategy to ensure that the plan is both implemented and monitored to completion.

As you can clearly see, the heart of the plan had nothing to do with identifying "who is homeless" since the city already knew how many homeless people were in the city a the time the plan was announced.

Again, from the MAYOR'S OWN DOCUMENT, here's details of the plan's primary objective entitled "INCREASE THE SUPPLY OF PERMANENT HOUSING UNITS TO MEET THE PROJECTED NEED OF HOMELESS PERSONS."

I. INCREASE THE SUPPLY OF PERMANENT HOUSING UNITS TO MEET THE PROJECTED NEED OF HOMELESS PERSONS.

The Permanent Housing workgroup was charged with developing a plan to identify permanent housing opportunities for Danbury’s homeless population. The proposed plan must take into account the diversity of needs of the city’s homeless population and develop a framework that will create solutions appropriate for effectively meeting those needs. In addition, the Committee realizes that any opportunity for permanent housing solutions for ending homelessness are closely tied to the work of the other Task Force committees involved in this process (i.e. reducing homelessness, preventing homelessness, and increasing services and support).

Researching and analyzing these issues required that the workgroup: review and analyze plans from other communities aimed at creating permanent housing solutions to homelessness; review federal and state programs aimed at addressing the issue of homelessness; and compile data from a variety of sources identifying the diversity of Danbury’s homelessness population.

Six action areas were identified and recommendations were formulated. They are:

While I won't post every point of the plan in this post, I STRONGLY encourage my readers to simply take a download Boughton's homelessness plan and read the objectives for yourself.

If Nolan is more interested in playing politics by defending the mayor's dishonesty regarding the essence of the homeless plan, how can he be effective in addressing homelessness in the city?

CityCenter Danbury’s Summer Concert Series is known for its diversity of music and audiences equally diverse. With the support of Union Savings Bank; Comcast; Ventura, Ribeiro & Smith; Danbury Parking Authority; BRT; Danbury Cultural Commission; Hat City Pools; and Downtown businesses, this summer is just getting started, and volunteers are welcome to assist in making the popular evening concerts all the more welcoming. ("The Sixties Show" is up on Friday, July 6th and "Gunsmoke" headlines on Saturday, July 7th.)

For their help, volunteers will receive a Family Pack of 4 buttons to First Night Danbury, the City's family friendly New Year's Eve celebration of Arts and Culture; discounts to local restaurants; and a post-summer reception of tapas and fine wine. To volunteer, contact CityCenter Danbury at (203) 792 1711