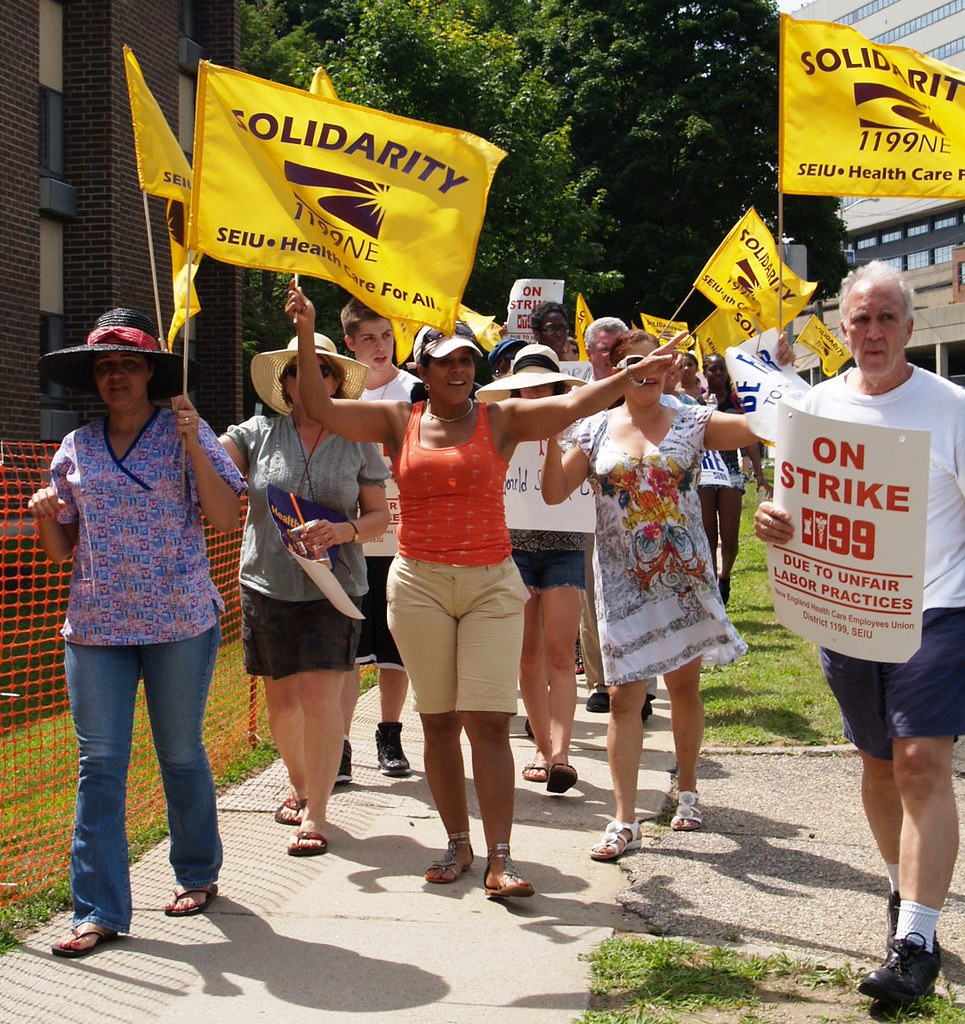 The following is a guest post from Deborah Chernoff, Communications Director for the New England Health Care Employees Union, District 1199 (SEIU Healthcare). -ctblogger. It’s not clear what exactly the tipping point was.

Maybe it was the outpouring of support for striking HealthBridge nursing home workers from residents’ family members and the surrounding community. It could have been the high-profile media attention HealthBridge’s record of lawbreaking to get its way was receiving.

Or perhaps it was Governor Malloy walking the picket line and standing with the caregivers that the 1% owners of HealthBridge would rather stand on.

But something got under the skin of the corporate strategists at HealthBridge. And when they realized that their scheme to transfer millions of dollars out of the pockets of Connecticut families and into their own bank accounts wasn’t going according to plan, it was time to shift into a new mode: Attack and accuse.

They are now attempting to divert attention away from their own crimes by accusing caregivers of sabotage – as if people who have given their lives to caring for the residents in their nursing homes would suddenly choose to endanger them. Here’s how workers reacted when they learned about the accusations from a Hartford Courant reporter:

On Wednesday, health care workers walking the picket line outside the Newington nursing home — one of five in Connecticut targeted by the 700 strikers — learned of the allegations. They were so indignant that they talked over each other, as rain clouds burst and small hail pelted them.

"We would never sabotage our residents," said Elaine Ewart.

Several union members in Newington were so disbelieving of the accusations that they speculated that the managers staged the sabotage to make the union look bad.

Don’t buy that HealthBridge has other motives for these accusations? Consider that HealthBridge waited to release the accusations until two whole weeks after the events allegedly occurred. Despite repeated requests for comment on dozens of stories since the strike began on July 3, the company officials said nothing.

Apparently, HealthBridge forgot it had filed police reports until a post magically surfaced on a right-wing blog on Monday. This was followed a few days later by a HealthBridge press release which was a heavily-politicized statement blasting not the alleged saboteurs but the Governor’s administration and other elected officials who offered their support to workers.

According to the police report, there is no camera footage to review. And only the regular caregivers, their strike replacements and HealthBridge supervisors had access to the equipment and materials that night before the strike began. The investigations are ongoing, and no one knows what the outcome will be. Despite the sensational headlines and disingenuous outrage churning in right-wing blogs, these accusations remain just that.

The allegations are surfacing now because, in the eyes of HealthBridge’s owners, these workers are guilty of a much graver offense: daring to stand up to its larger economic agenda.

Because of this, HealthBridge, its right-wing enablers, and 1% apologists everywhere would love to discredit all of those on the picket lines, whether they are direct caregivers or those who support them. HealthBridge is carefully calculating ways to try and divert attention away from the very real costs of its relentless pursuit of greater-and-greater profits:

And HealthBridge principal, brothers Daniel and Moshael Straus, their subsidiaries and related companies were paid a whopping $234 million from HealthBridge coffers in the same year.

As the strike continues, we can expect to see more diversions and distractions by HealthBridge to try and demonize those who stand up to their greed and expose the company’s long history of unlawful actions. The public can now expect to see a whole new side of HealthBridge—one that its workers and residents are all too familiar with and one that will stop at nothing to get what it wants.

posted by ctblogger at 4:07 PM

Since the lawsuit filed against Mayor Boughton by his former secretary has been moved to federal court (CT District Court, New Haven), access to the court docket is a little more complex.

You can follow the proceedings at the following link. I know of several statewide reporters who will follow this case so (as well as yours truly) so I'll try to keep everyone updated with the case as it proceeds.

It's a pity that she didn't make the cut...now don't try and BREAK THE LAW

Here's a way to keep them honest at City Hall...follow the bullet points. If you know about any of the REAL activities at City Hall, 99.9999999 percent of the rumors are 99.999999 percent true, which is why this situation are totally believable (especially when it involves Doran and Natale).

As you can see, Natale came in 8th which, according to the law, which states that you can only pick from the top six candidates, makes her ineligible for the position.

But we're talking about Boughton's City Hall...a city hall that adheres and ignores the law at their choosing (and we all know how that translates in terms of lawsuits).

The question remains...could city officials be so arrogant to attempt to make the same mistake they made in the past?

The intersection of Locust and White Street was closed late last night while firefighters dealt with a first floor apartment fire.

According to the police on the scene, one person was taken to the hospital due to smoke inhalation. The cause of the fire was unknown at the time I was at the location.

Here's video of the scene after the fire was extinguished.