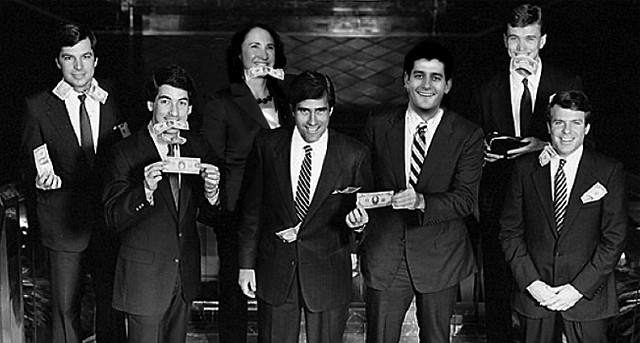 Funny how she fits in with "the crowd."

"Paul Ryan authored the extreme Republican plan to turn Medicare over to the health insurance companies and Social Security over to Wall Street, while giving more tax giveaways to millionaires and big oil. Democrats can win this year only if we highlight this contrast for voters and promise not to cut programs like Medicare, Medicaid, and Social Security."

"I'm the only candidate that can make that case and win in November because I am the only candidate in this race with a record of fighting for and protecting programs for seniors and children in the state House. My opponent, former Representative Elizabeth Esty, proposed a plan to cut these programs instead of asking millionaires to pay a bit more in taxes. Connecticut families deserve someone in Congress who will fight for them, not for millionaires and corporate interests."

While I'm still not a huge fan of SuperPACs, this latest ad from pro-Roberti SuperPAC New Directions for America does something that neither Chris Donovan or Dan Roberti have done effectively...point out Esty's "Republican-Light" voting record.

This exposure should had happened months ago!

REFERENCED POINTS FROM AD (most points in the ad where referenced by yours truly in several posts).

The budget restores funding for food vouchers for poor senior citizens, provides nursing-home funding at a time when 11 nursing homes are in foreclosure or bankruptcy, restores funding for the ConnPACE prescription-drug subsidy program, as well as providing money for elderly housing and homelessness services. The Democrats also restored money for teen-pregnancy prevention and an early-intervention program for children at risk, as well as youth service bureaus that help children after school. The measure also restores $6 million in funding in each of two years for family resource centers that Rell had proposed eliminating, as well as providing money for the Children's Trust Fund.

Elizabeth Esty would be doing her husband a big favor if she didn't take campaign contributions from utility executives.

The perception of conflict of interest is simply too strong and potentially damaging. That Ms. Esty didn't realize that such contributions could pose an ethical problem is surprising.

Ms. Esty is running for the Democratic nomination for the 5th District congressional seat being vacated by U.S. Rep. Chris Murphy. Recently, she reported campaign contributions totaling $2,000 on June 29 and 30 from four executives of Northeast Utilities. She should return the contributions.

With controversy already enveloping the $205,000 in consulting work that Daniel C. Esty did for Northeast Utilities before he became commissioner of the state Department of Energy and Environmental Protection, it turns out that NU executives also have contributed to the congressional campaign of Esty's wife, Democrat Elizabeth Esty, public records show.

Why should it matter that four NU executives gave a total of $2,000 on June 29 and 30 to Elizabeth Esty's effort to win her party's nomination in the 5th Congressional District?

It matters because corporate executives could be "seeking favor" from an official whose agency regulates them — as Esty's does — by giving campaign contributions to his wife, said Sheila Krumholz, executive director of the Washington, D.C.-based Center for Responsive Politics.

The executives might hope that either the regulator or his wife — if she is elected to Congress — "might view their agenda in a more favorable light," said Krumholz, whose non-profit groups monitors money in politics. Donations don't necessarily mean executives are trying to influence a public official, but they bear watching to be sure official actions aren't influenced, she said.

In the case of Daniel Esty, Krumholz said, "his office should be mindful of the potential for conflicts of interest, or the appearance of a conflict," that might arise from someone who is regulated by Esty's agency giving money to his wife's campaign.

posted by ctblogger at 8:00 AM