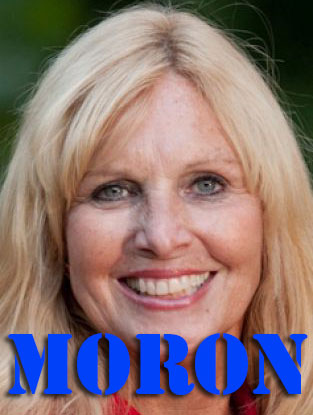 UPDATE 4 (11:00 AM): As the criticism increases, Hovey goes into damage control mode.

Hovey's spokesman Jamison Bazinet confirmed to Intelligencer that the statuses were indeed legitimate and have since been deleted. Hovey's profile has also been switched to private, he said. Bazinet would not comment on why the update was removed, but said Representative Hovey expects to release a statement on the matter this afternoon.

UPDATE 3: Pat Scully at the Hanging Shad had this to say.

Sometimes I just shake my head, blown away by a public official’s rank stupidity. Such was the case when state Rep. DebraLee Hovey posted on her personal Facebook account, “Gabby Gifford [sic] stay out of my towns.” Hovey was upset that former US Rep. Gabby Giffords, who made a miraculous recovery from an assault weapon attack in Tucson two years ago tomorrow, visited with family members and other public officials in Newtown last Friday. The meeting was closed to the press.

Hovey then went on to dig the hole deeper by accusing Giffords of being motivated purely by politics. She took down the offending posts but not before the Hartford Courant’s Capitol Watch blog posted the screen grabs demonstrating the crass, moronic state rep for what she is. For this idiocy alone she should be defeated in the next election. Unfortunately, that’s not for another two years.

Ms. Hovey, Gabby Giffords will go wherever she wants (and they’re not “your” towns, you have the privilege to represent them in the state House—hopefully for a final term) and she will be welcomed with opened arms for the courageous person she is. Do you think maybe Congresswoman Giffords might have an interest in the aftermath of Newtown? Something tells me she didn’t give a minutes thought to some paean state representative—or sorry, “Assistant Republican Leader.”

UPDATE 2: Only in Bridgeport's Lennie Grimaldi's headline pretty much sums things up.

Six days into 2013, 359 days to go in the New Year – and we already have a top contender for the nation’s “A**hole politician of the year” award.

No it is not some right-wing Arizona sheriff or an ultra-conservative right-wing tea-bag southern politician; it is a Connecticut State Representative who serves as one of the House Republican’s Assistant Minority Leaders.

According to a Hartford courant update this afternoon, Connecticut State Representative DebraLee Hovey responded to former Congresswoman Gabby Gifford’s visit Friday with Sandy Hook Elementary school families by getting on her Facebook page from her Florida Saint Pete Beach vacation to write

“Gabby Gifford stay out of my towns!

Apparently DebraLee Hovey was mad that she hadn’t been invited, jumping to the conclusion that it was an attempt by some Democrats to try and capitalize on the massacre.

However, according to sources there in Newtown, the town’s REPUBLICAN First Selectwoman was in attendance at the meetings, meetings, by the way, that were closed to the media.

It's official, State Rep. (and ASSISTANT REPUBLICAN LEADER) DebraLee Hovey is an asshole.

State Rep. DebraLee Hovey, who represents Newtown and Monroe, posted this on her public FB page. From Florida. (Note: Hovey removed the post from her public Facebook page on Sunday afternoon).

Giffords visited local officials and Sandy Hook families Friday in meetings that were closed to the press.

She had more to say in this comment thread:

I'll won't even comment on how Rep. Gifford's event in Newtown was CLOSED TO THE PUBLIC (or how NEWTOWN'S REPUBLICAN FIRST SELECTWOMAN was in attendance) and get right to the point.

As someone who knows a thing or two about this clown, I'm not shocked by her idiotic and disgusting rant. I'm only happy that the media has finally picked up on her latest disgraceful act.

If you're as disgusted as I am, feel free to give State Rep. Hovey a piece of your mind. Make sure to copy and paste your message to State Rep. Hovey in the comments section at this site since she has a habit of scrubbing her Facebook page.