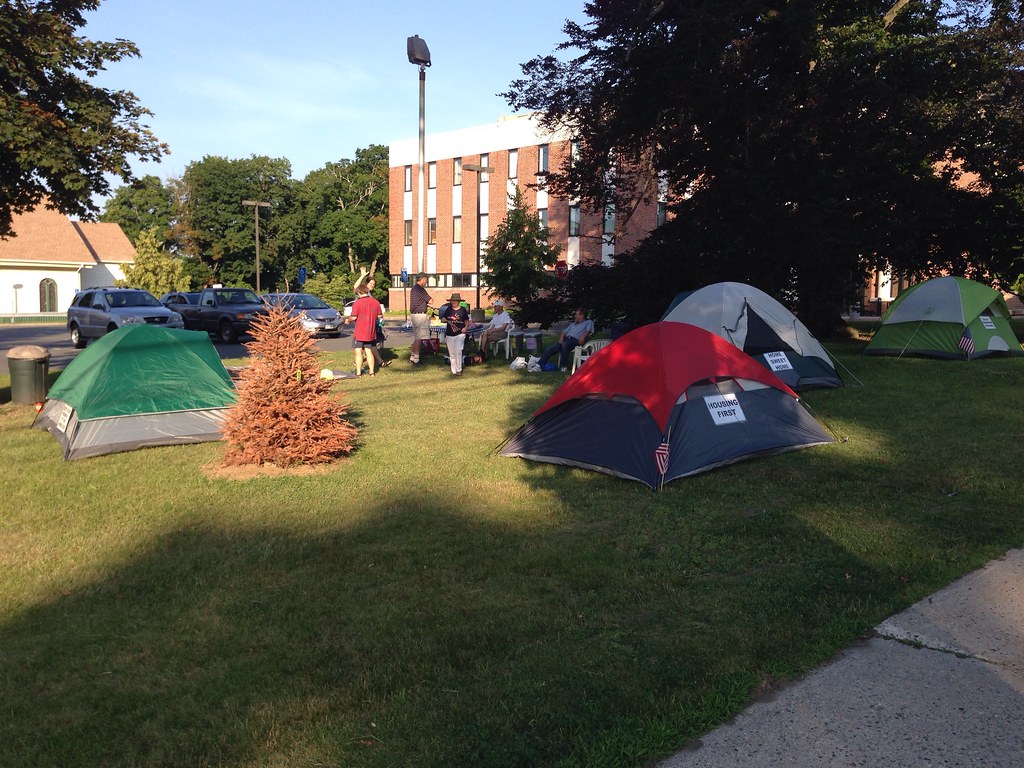 On Sunday, advocates and activists led by former State Rep. Lynn Taborsak returned their in their tents to City Hall to bring attention to Mayor Mark Boughton's failed homelessness policy.

Once again former State Representative Lynn Taborsak is taking the issue of homelessness to the front steps of City Hall for a protest that calls for action on the City’s 10 Year Plan to end homelessness.

According to the latest Point in Time count, there are 122 single homeless adults in the city and only 37 emergency shelter beds are available. “ It’s a humanitarian crisis and it has gone on for too long”, stated Taborsak. “I hope that this protest will both make the problem more visible and result in more community support for finally getting some action”.

“When you see the people and organizations that developed the plan for Mayor Boughton in 2005, you see the “Who’s Who” of civic responsibility. Where are these people now? Why have they allowed the city to abandon the heart of the plan - a laudable goal to provide 275 units of new permanent housing”.

The protest will conclude on Sunday, July 13th and protestors will present their petitions calling for action to the City Council before the August meeting. “There is a new plan in the works to end chronic homelessness that will be presented to the Danbury Housing Partnership this September,” stated Taborsak. “Let’s make sure we have a plan that will really provide Danbury’s homeless with a safe, stable place to rebuild their lives.”

On the night of January 29, 2014, volunteers in Danbury conducted the annual HUD Point-In-Time count to determine the number of individuals living without a safe, stable place to call home.

This year Danbury counted 148 people: 18% were in families with children and 82% were single adults.

Since 2009, the Point-In-Time count statewide has fallen by 4% but the number here in Danbury has increased by 17%.

This year Danbury had the largest proportion of single homeless adults of any region in the state. Danbury has seen a 34% increase in homeless single adults since 2009.

Danbury’s private rental market is much more expensive than the state’s average, making rental housing here deeply unaffordable for very low income individuals. The fair market rent for an efficiency apartment in Danbury is $1022 and $1165 for a one-bedroom apartment.

Owners of private rental housing will often reject homeless applicants because of poor credit, no credit, no recent rental history or misdemeanor violations, including loitering, breach of peace, panhandling and failure to appear.

If we use the 2014 Point-In-Time data which usually under-represents the actual level of homelessness, there are 122 single homeless adults in Danbury who have no safe, stable place to live.

The City Shelter provides 20 emergency beds year round to 5 women and 15 men over the age of 18 who have a state issued photo I.D. and meet other criteria. That leaves 102 homeless adults with no safe, stable place to stay.

The Jericho Shelter on Maple Avenue is open for 6 months of the year from November 15th until April 15th. It has 16 beds for men and provided 2075 bed nights for the 2013-2014 shelter season.

The First Congregational Church Shelter across from City Hall has 26 beds and provided 3498 bed nights this season for men and women.

As a community, we must insist that thirty-seven emergency shelter beds do not meet the local need for safe, secure shelter for Danbury’s homeless adults. We must increase the number of year-round beds and begin to develop the supportive housing called for in 2005 in the Mayor’s 10 Year Plan to End Homelessness.

It’s time to move forward using the principles of Housing First. Provide people with housing quickly without income or sobriety requirements. Offer services that promote housing stability and personal well-being. Set goals for reducing homelessness among single adults and measure your progress. Prioritize housing assistance based on a vulnerability index. Identify your successes and share them with the community.

This September, the Danbury Housing Partnership will receive the draft of a new plan to end homelessness. It will need input and support from the community or it will fail to achieve the results that we all want…a future where everyone has a home.

Please comment on the plan at its public hearing so that it can be modified and improved if necessary. Please support the final plan if it has merit to the City Council which must give its approval later this fall. Please volunteer to attend meetings of the Danbury Housing Partnership to monitor the plans progress.

No one should be without a safe, stable place to call home.