Rep. Buck-Taylor's post is the latest in a string of attacks against the legislation intended to stir up fear. In March, she put out a press release outlining her opposition, in which she implied her support of Connecticut's current "three strikes" and mandatory minimum laws, which disproportionately impact people and communities of color.

"This is a deplorable attempt to blatantly misrepresent the impacts of legislation which will make our communities safer. It's time for Representative Buck Taylor to stop distorting the truth and apologize for her offensive comment." - Leigh Appleby, Connecticut Democratic Party spokesman.

Also, who paid to sponsor Rep. Buck-Taylor's Facebook post? Was it a blatant political attack paid for at taxpayer expense?

"To treat those folks differently because they live in those communities is patently unfair and if not racist in intent, is racist in its outcome...”

*Gov Malloy on opposition to the elmination of drug-free zones that resulted in the mass incarceration of people who reside in urban communities.

By now, you've read of heard about the latest round of phony outrage from the Michelle Bachman of Connecticut House Minority Leader Themis Klardies regarding remarks from Gov. Dan Malloy in which he CORRECTLY decribed those who support our state's drug-free zone policy as "if not racist in intent, is racist in its outcome."

Well, at least when it comes to streotypical racist rhetoric from the state GOP, yesterday in a sponsored post on Facebook, New Milford State Rep. Cecilia Buck-Taylor pretty much made the case for the governor. 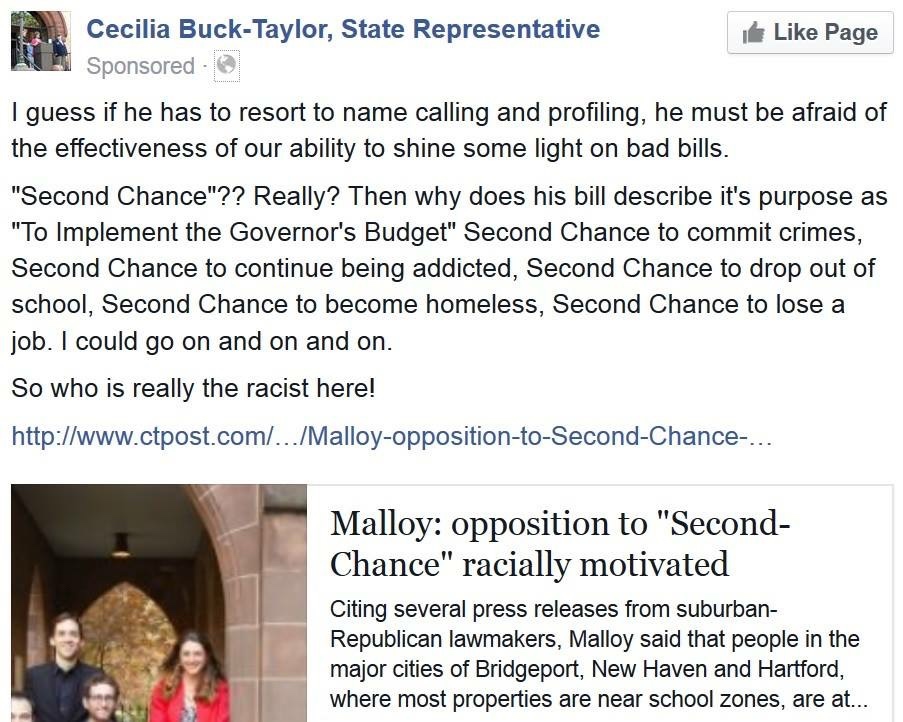 I guess when it come to inciteful rhetoric from within the State GOP, State Sen. Mike McLachlan has some real competition!