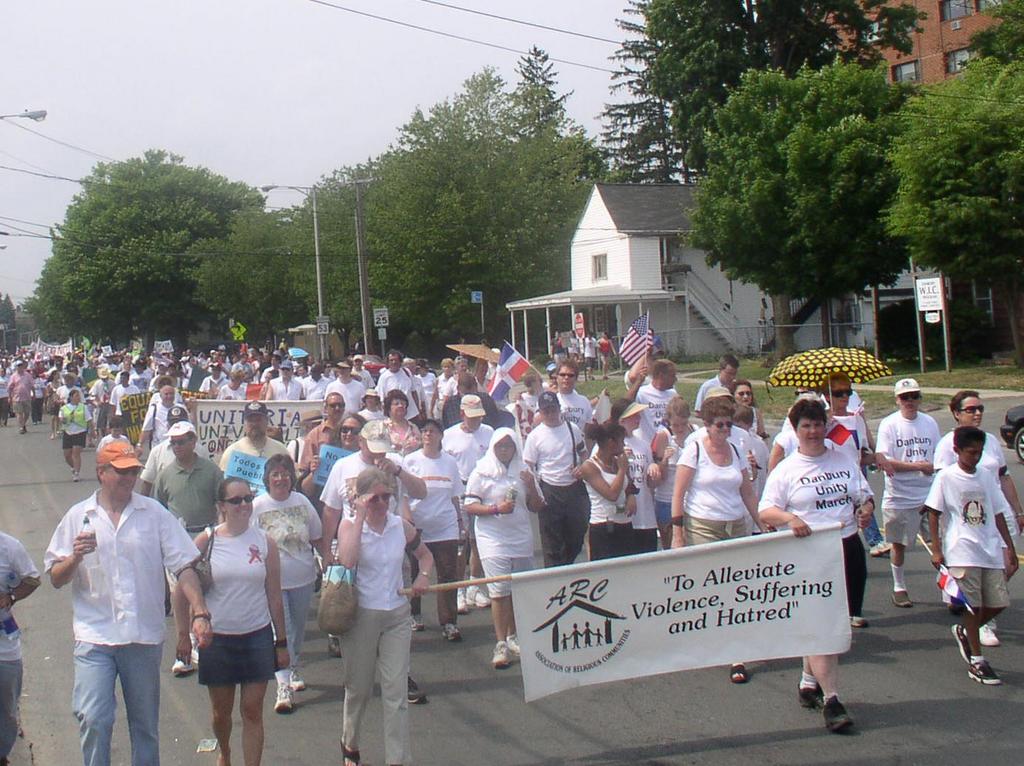 Advocates for the rights of immigrants will never forget June 12 2005!

It was on that beautiful Sunday afternoon, over 1,000 residents stood in solidarity with Danbury's immigrant population and stood against the anti-immigrant/racist policies of Mark Boughton, his chief of staff (and architect of many of the city's anti-immigrant policies) Mike McLachlan, and their extremists admirers within the city's nativist movement.

Here's a small sample of the how the march was reported in the press.

Angered and energized by Mayor Mark Boughton's call for tougher enforcement of immigration laws, a new immigrant rights group announced Wednesday it would sponsor a march here on June 12.

The very existence of the group is one of the many unexpected developments since Boughton asked Attorney General Richard Blumenthal April 15 to seek federal approval to have state police enforce immigration laws.

The creation of the Danbury Area Coalition for the Rights of Immigrants marks the first foray into political activism for the growing local immigrant community. It is also the first time immigrants from many countries -- including Brazil, Ecuador, the Dominican Republic, Columbia and Argentina -- have worked together closely.

Leaders of the group said Boughton's proposal has aggravated fear among immigrants.

``It was not something that was here before,'' said Wilson Hernandez, coordinator of the group and a former president of the local Ecuadorian Civic Center.

Boughton's proposal drew national attention to Danbury, a city struggling to deal with a dramatic increase in immigrants in recent years. City officials say there could be 10,000 to 20,000 immigrants here, although immigrant leaders say the number is lower.

Coalition leaders said they need to respond to increasing anti-immigrant sentiments and show they are an important part of Danbury.

``We want all Danbury residents to know immigrants are not a threat,'' Hernandez said. ``The threat is intolerance.''

Shortly after the coalition held a press conference at her church Wednesday, Pastor Juana Jourdain Villavicencio of the Hispanic United Church of Christ said the unity within the diverse immigrant community would not have been possible if not for Boughton's proposal.

At 2:36 p.m., the silent march on Main Street was anything but silent. It happened as the crowd of 1,200 marchers went past Elmwood Park, just south of the police station on Main Street.

About 30 people, mostly Latinos, were in the park watching the procession pass. Suddenly, the marchers broke into a chant.

It means "Latinos united will never be defeated."

The marchers flailed their arms wildly, urging the people in the park to join.

A man with a smiling toddler on his shoulders joined in. A few laborers got off a bench and joined in. They were smiling as well.

Anderson Andbade, 25, and Vanilde Cavacante, 28, joined in - and they were only in town for a day to visit friends.

"It just makes me feel good to see this," said Andbade, from Port Chester, N.Y., by way of Brazil.

Cavacante, meanwhile, recorded the whole thing on a digital video camera. She's going to send it back to her mom in Brazil.

So it went Sunday during the first "Danbury Unity March," an event organized by the Danbury Area Coalition for the Rights of Immigrants.

While some expected it to be a protest march, the event felt more like immigrant pride day. The crowd was large - at one point, it stretched from the Boughton Street intersection up Main Street for as far as the eye could see.

Flags from other nations were everywhere. Mexico, Brazil, Portugal, the Dominican Republic, Ecuador, Peru and Colombia were just a few of the countries represented.

Labor unions, local church groups and a large contingent of marchers from Hartford participated as well.

Some people rode bikes and plenty of young families brought their babies in strollers.

Everyone, it seemed had a camera.

A man videotaped the event from the roof at Pao Gostoso, a Brazilian bakery. A young Latina wearing a Dunkin' Donuts uniform snapped photos and waved from the balcony of her apartment above the old Palace Theater.

Organizers sold "Danbury Unity March" T-shirts for five bucks a pop. They sold hundreds of shirt at Kennedy Park. Men changed into the shirts immediately after buying them.

A boisterous group of young Puerto Rican men and women cheered loudly at the entrance of Rogers Park each time a flag representing a country from Central or South America passed by.

Kathiria Alba and Beberlee Maldonado, of Danbury, were part of the cheering crowd.

"This is the first time in history Danbury has had something like this," Maldonado said. "We didn't know the Latin culture was so big here."

Joseph Lopes, a 78-year-old World War II veteran from Bethel, stood at the entrance of Rogers Park applauding the marchers.

"I like to see the youth united and working together intelligently. This is very American," Lopes said.

Exavier Avaca, who came to Danbury from Ecuador three years ago, said the day was important protect the rights of everyone.

"We want to protect our opportunity to work in this country," he said.

Johanny Peimentel was born in the Dominican Republic, but has lived in the United States most of her life, believes it was important to for the community to speak on the matter.

"This is a free country and it is the first place that was started as an immigrant country," Peimentel said. "Illegal aliens, all they want to do when they get here is work. They're not coming to kill anyone or steal anything. They just want to work."

And here's how I reported on the march for my site, ConnecticutBLOG, back in 2005:

I first arrived at the rally on Kennedy Street around 1:00 and to my disappointment, there were under 100 people at the site but by the start of the march, the number of people grew to about 500 and took up all of Kennedy Street. While the people marched down Main Street and people saw that their was nothing to fear, what was once a modest crowd of 500 quickly doubled in size (news reports have the crowd estimated at 1,200) and took up a good portion of Main Street (if anyone knows Danbury, the size of the march at it's largest stretched from the corner of Main and White to the library on West Street.

Overall, the march made it's case but except for a couple of politicians, most Democrats were noticeably absent from the event which does not surprise anyone who lives in the Danbury area. Most Democrats have been silent on the issue of immigration and few have criticized the mayor in public. One would think that more democrats would stand up an go after the mayor and his policies and until liberals take a stance against the conservative mindset in Danbury, they will continue to lose elections.

Finally, for your viewing pleasure, here's video of the rally in full.
posted by ctblogger at 3:12 PM