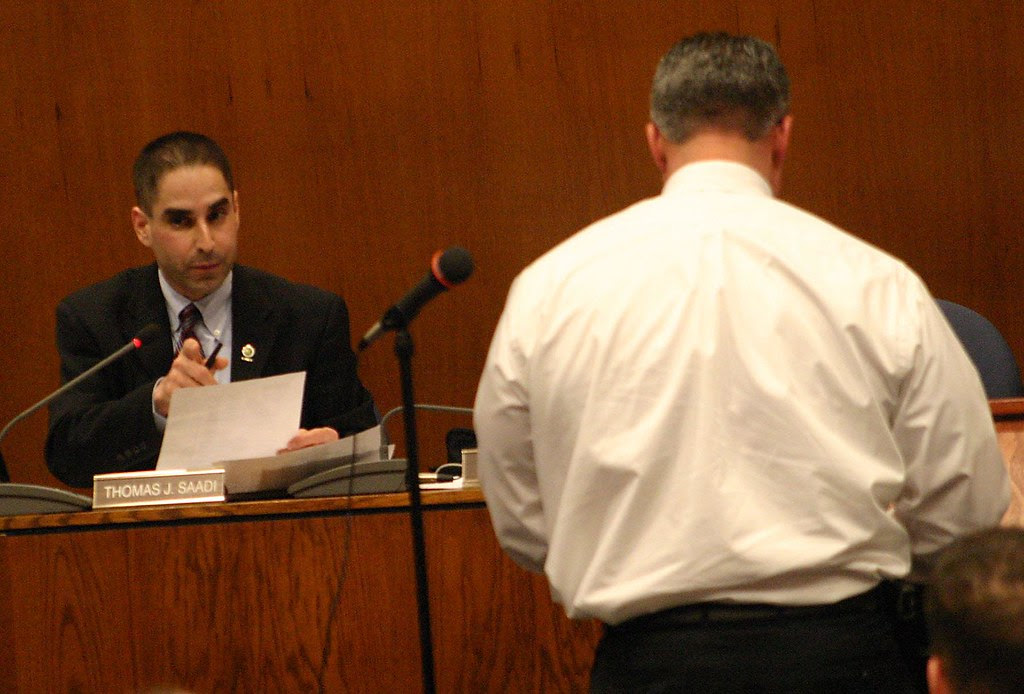 As the debate over Mayor Boughton's decrease of the Board of Education budget proposal is underway, I thought it would be informative to take a look at the past budget/fiscal battles between the city council and school officials.

This oldie for goodie was originally posted Feb. 29 2009.

(NOTE: Here's a copy of the salary spreadsheet that's being referenced by Minority Leader Saadi (click to enlarge). The principals in question (Broadview and Rogers Park Middle School) are circled and their scheduled pay increases are written on the right hand side of the spreadsheet.) Last Thursday, during my interview with Minority Leader Saadi, the matter of the pay increase came up...

Equally as puzzling to many is the fact that Mayor Boughton didn't failed to take a stance on the administration contract in the same manner as he's currently doing with the teacher's contract.

...as the News-Times editorial states:

So it's good to see that the board and the union have agreed to try mediation again, at the urging of Mayor Mark Boughton. A mediation session has been set for March 4. If mediation doesn't work, the dispute will go to binding arbitration.

It's easy for city officials to demand concessions from the teachers. But their argument is undercut by their failure to challenge the recent contract approved for school administrators, granting a 4.5 percent increase.

The administrators contract had been settled by binding arbitration and city officials said a return to arbitration would be expensive and could produce the same contract.

Still, the teachers are being subjected to mayoral jawboning for contract changes and the administrators were allowed to escape. It's not fair.

Simply put, with education taking a lion's share of the city's overall budget, where was Mayor Boughton when this god-awful administration contract being negotiated PRIOR to it being rejected by the Board of Education sent to binding arbitration? If the mayor can step in and request a mediation between the BOE and the teacher's union, it's logical to assume that he could have done the same thing in the case of the administration's contract and the BOE.

For the mayor not to step in when he had a chance opting instead to allow a binding arbitrator to award NINE PERCENT pay increases is irresponsible giving the current economic state of affairs in this country.
posted by ctblogger at 10:57 AM

Neil Vigdor and Matthew Kauffman at the Courant have the latest details:

From the time U.S. Rep. Elizabeth Esty first learned about violent threats her chief of staff made against a former aide, two months passed before the victim was interviewed as part of an internal investigation, emails obtained by The Courant show.

The former aide, Anna Kain, told Esty of the abuse May 6, 2016 — a day after Chief of Staff Tony Baker left Kain a profanity-laden voicemail in which he threatened to kill her. By early July, Kain said, she had become so frustrated with the apparent lack of action by Esty — and so fearful of Baker — that she obtained a protective order from Washington, D.C., police.

It would take until mid-July of 2016 before Julie Sweet, a former top aide selected by Esty to conduct the probe, finally met with Kain. Baker, who remained in his powerful position throughout the spring and later attended the Democratic National Convention with Esty, was terminated in mid-August of 2016.

Esty told The Courant last week that she learned on May 6, 2016, that Baker had called Kain’s cellphone 50 times the night before and said in a drunken rage that he would kill her if she didn’t answer.

The lawmaker said she immediately confronted Baker, who did not deny the incident. But instead of suspending Baker, Esty turned to Democratic lawyer Joseph Sandler, who recommended an in-house investigation.

Esty called Kain on May 11 and used her Yale University email account — she received her law degree from the Ivy League school — to communicate with Kain.

Kain declined a one-on-one meeting with Sandler, arranged by Esty, without her lawyer present. Kain said she heard from Sweet, Esty’s investigator, in July.

Esty’s office declined to give a timeline of the probe or provide a copy of the investigation report to The Courant, citing the confidentiality of staffers who were interviewed by Sweet.

When Baker was fired, Esty signed a nondisclosure agreement that also applied to all staff in her office, former aides said.

A female colleague of Baker’s at the time said it was unnerving that he was allowed to stay in the office for months after the May incident.

“I just remember crying,” she said. “To know that I sat next to this man for so many months.”

Another former aide said Esty chose to keep silent instead of publicly condemning the behavior of her top aide.

In wake of the latest details, it's clear that Congresswoman Esty needs to resign as opposed to not seek re-election (which will allow her to collect a government pension which she clearly does not deserve).

posted by ctblogger at 7:40 AM