I guess it's safe to say that Martha Rhodes has learned nothing...

The Democratic Town Committee member who made headlines with her ill-advised and racist commentary regarding Congressional candidate Jahana Hayes has been busy playing the role of the victim after she issued her half-heartred apology/non-apology to the public...and recently, Rhodes stoop to a new low in using Senator John McCain's to continue her right to say idiotic and divisive statements... 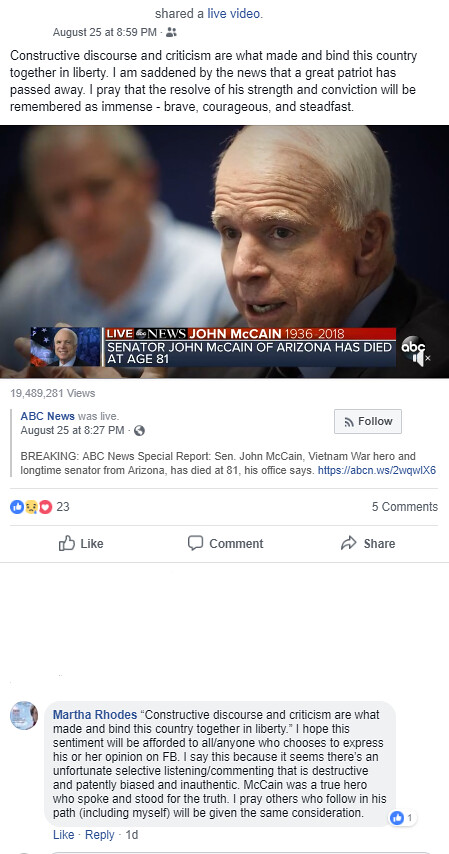 While Rhodes has the right to act like an idiot on social media, the Danbury Democratic Town Committee should not associate themselves with a closed-minded member of the white priveleged family.

For the sake of a town committee that is desperately attempting to regain a sense a credibility in the area, the local political body should take a stance and inform Rhodes that her presence on the committee is unwelcomed.

posted by ctblogger at 8:34 AM

Tonight the Danbury Democratic Town Committee will hold their first monthly meeting since one of their members, Martha Rhodes faced heavy criticism and calls for her resignation after posting inflammatory commentary regarding Congressional candidate Jahana Hayes that many considered to be racist.

This is a critical moment for a town committee that still faces criticism over their support for former chairman and mayor Gene Eriquez after his arrest on spousal abuse charges. Unlike their ill-advised decision to stand behind the disgraced mayor, based on Rhodes NON-apology she made after her "apology" she made to the Newstimes, for the good of the party, the committee should do the right thing and ask one of their own to step down.

The meeting, which will take place at 7:30 PM at 161 Main Street, is open to the public...and open commentary is allowed at the start of the event.

In honor of my desire for Rhodes to spare the Danbury DTC further ridicule, here's a re-posting I originally wrote on August 7th.

After staying silent in face of the firestorm around her, on the same day that the Newstimes started an inquiry regarding her offensive and racist commentary regarding Jahana Hayes, Danbury Democratic Town Committee member Martha Rhodes posted the following message before temporarily deactivating her Facebook account. 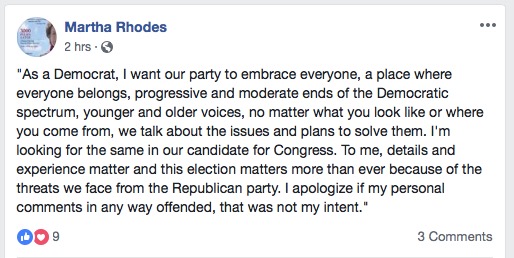 posted by ctblogger at 9:02 AM