Danbury Library to reopen to community on March 22


In another sign of the city getting back to a sense of normalcy, today the Danbury Library announced that the building will be repoened to the public on March 22. 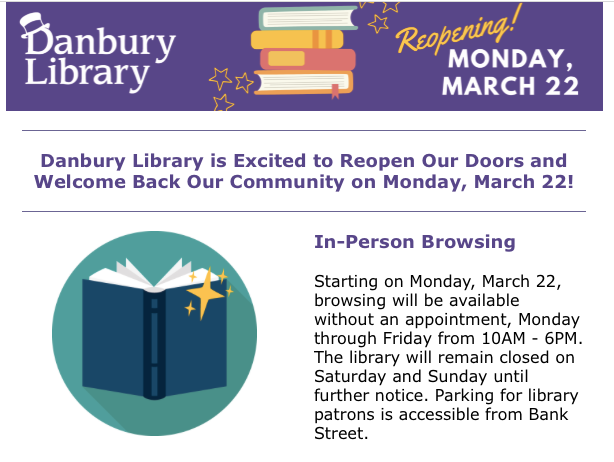 posted by ctblogger at 4:37 PM

This week, members of Latinos for Educational Advocacy in Danbury published an op-ed in the Connecticut Mirror where they levied their most critical commentary to date regarding the city's Democratic state delegation's opposition to Danbury Prospect School.

Last month in his executive budget, Gov. Ned Lamont proposed funding for an Open Choice Program that would bus 50 elementary school children out of Danbury to receive an education. At the same time, he excluded Danbury Prospect Charter School from his budget.

This decision was a severe disappointment to all who have fought hard to bring the charter school to Danbury. What’s worse, it clearly signals the intentions of the Danbury Democratic delegation: to ignore the demands of Black and brown constituents who have spent years advocating for Danbury Prospect. It’s a slap in the face to a community who has traditionally been underserved and who desperately needs better representation in local, statewide and national government.

We are the only major Connecticut city without a charter school. Our legislators have exploited our citizens’ lack of knowledge about charter schools to hide their true political intentions. It’s one thing for legislators to disagree on the tenets of a charter school in Danbury. It is an entirely different thing to propose no alternative solutions while propagating misinformation about how charter schools operate and serve children.

Give the entire op-ed a full read...expect the topic of charter school playing a significant role in the upcomming municipal election season.
posted by ctblogger at 1:54 PM