One on one with Roberto Alves 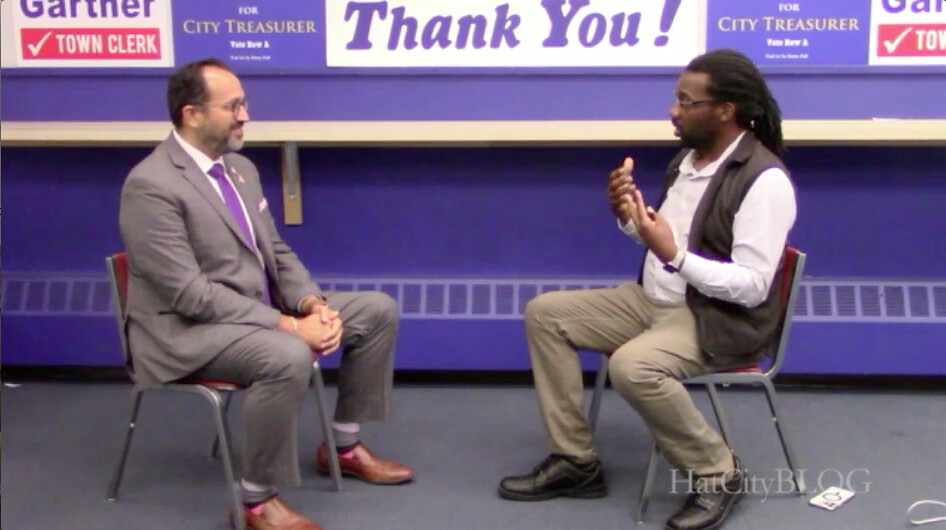 Earlier this month, I had the pleasure to interview mayoral candidates Dean Esposito and Roberto Alves and get their take on their vision for Danbury. While I was able to post my sit-down with Esposito, I was unable to post my discussion with Alves until now due to annoying computer problems.

I met with Alves at Danbury Democratic headquarters and listened as the Democratic candidate opened up about his experiences growing up as an undocumented immigrant in the city. Alves also detailed how his upbringing and desire to help others paved the way for his involvement in politics, becoming the Democratic Party's choice to lead the city.

Unfortunately, Alves' team can only allot me twenty-five minutes to interview their candidate, so I could not cover several important topics that I could discuss with Esposito. Thankfully, Alves stayed a while longer and provided his view on one of the top concerns among active residents: the city's lack of passive recreational options.

If I seemed rushed in the interview, it's because I was constantly looking at my watch and noticing that we were losing time rapidly and we didn't tackle a single topic yet. I sped up my questions so Alves could provide his viewpoint to the public on as many topics as possible before the interview had to end.

I'll give my take on Alves and Esposito's interviews next week.

posted by ctblogger at 3:03 PM

John Krupinsky, President of the Danbury Fraternal Order of Police, strongly encourages all residents of Danbury to vote for Dean Esposito for Mayor on November 2nd to continue to keep Danbury safe.

"I am honored to receive the endorsement of the Danbury Fraternal Order of Police. As your next Mayor, I will support our men and women in law enforcement by providing adequate funding and support so they can continue to keep our community safe.” said Dean Esposito.

During Esposito's tenure as Chief of Staff, Danbury was consistently ranked one of the safest cities in CT. As Mayor, Dean Esposito will ensure that the brave members of the Danbury Police Department are equipped with the training and technology they require to serve and protect the Danbury community. Esposito is a long-time supporter of the Danbury Police Departments community policing activities that convey the DPD's dedication to Danbury and help keep residents, especially the children, safe.

posted by ctblogger at 1:21 PM