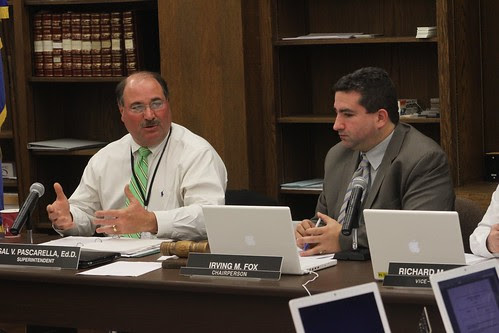 Danbury School Superintendent Sal Pascarella offers his thoughts on the grading modification at DHS with members of the Board of Education. Danbury BOE meeting, 02.23.11


Yesterday, the Board of Education finally addressed the much talked about grading policy modification at Danbury High School.

Changes to the grading system at Danbury High School, made in part because of the number of missed school days this year, received a backlash with several teachers, parents, and students criticizing school administrators and calling the changes unfair.

From last night's public participation portion of the meeting, here's resident Sandy Steichen addressing the board about the grading problems at DHS.

Although several residents have expressed their displeasure with the modified grading policy, a majority of the board supported the decision made by DHS principal Robert Rossi and school officials.

Here's video of the board's discussion on the matter.

Based on the reaction of those in attendance to the comments made by members of the board, it's safe to say that some people were not satisfied with what they heard.

Could Principal Rossi handled the situation differently...ABSOLUTELY. As several members of the board mentioned, the communication in this matter was anything but acceptable. In fact, other schools in the area tackled their grading situation differently with an overall positive reaction from the public.

For instance, in Ridgefield, school officials simply canceled mid-terms testing after students voiced their concerns and I still don't understand why school officials in Danbury didn't do the same thing.

Also, the BOE as a whole should receive a failing grade when it comes to the way they addressed the concerns from the public. It's bad enough that the meeting was delayed because there weren't enough board members present to have a quorum, it seemed that the board was not interested in addressing some of the critics chief concerns.

For instance, no questions were raised by board members regarding the breakdown of communication between parents and school administrators...

Dale Steichen, a parent of a student at Danbury High School, spoke at last Wednesday's Board of Education meeting about concerns with mid-term examinations. He asked many questions of the board, and most of them have gone unanswered until now. His most pressing complaint was his suspicion of grade tampering.

A decision to adjust the weighting of grades at Danbury High School had not been passed onto parents, and Steichen wondered if grades could be changed to suit the needs of the school. Steichen wanted to know, “Is it fair to change the grading process without informing parents and students?”

Here's another concern that was not fully addressed by a member of the board:

“On Jan 31, a group of people including the Superintendent decided the test grades would only be changed to 20% if it helped the students,” said Rossi. If there were students that would be hurt by it, we would keep it at 10%. Students who failed or did not show up for the test would be given a 50%.”

Students have wondered what kind of message was being sent if grades could be changed to suit their needs.

Although the board went on and on about failing grades, the underline concern regarding the change in grade weight depending on the score a student received was not addressed.

Then finally, at no point was Principal Rossi present at the board meeting to address the matter and answer the public's concerns. In fact, it seemed like the members on the board were more interested in defending the actions made at DHS as opposed to asking questions on behalf of the member of the public who were critical of the grade modification.

Hopefully all parties involved learned a thing or two from this dust-up before charges of lack of integrity are directed towards Rossi and his team at the high school again...only time will tell.

UPDATE: News-Times Eileen Fitzgerald talked to Steichen last night and her comment regarding what transpired at the meeting echoes the points I raised in this write-up.

After the meeting, Steichen, who has a child in college and one in high school, said she's disappointed in the board's response and the lack of interest in the parents on the issue.

Glad to see that I wasn't the only person who walked away disappointed at the way the board handled the situation. 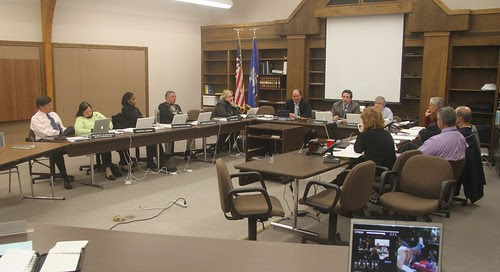 Tonight, I plan to provide a live video stream of the Danbury Board of Education meeting.

Particularly interesting is item 11 on tonight's agenda, which centers on the mid-year grading at Danbury High School. Modifications to the grading policy was criticized by several from teachers, students and parents. Although grading controversy was brought up by a member of the public as of today, the board had not commented on the topic.

The stream will start around 7PM.

This episode is REQUIRED VIEWING!!!!!

THE CASE AGAINST JOHN McGOWAN: Alleged rapist due in court tomorrow 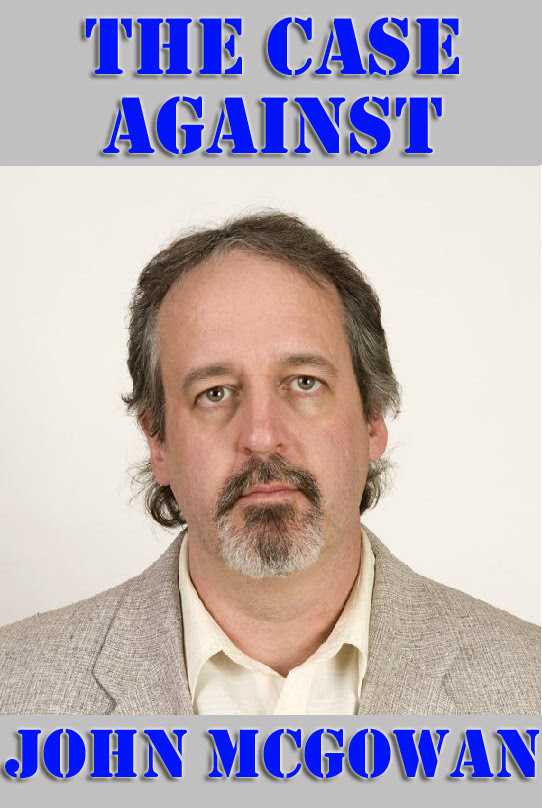 UPDATE 02.23.11: McGowan's case has been continued for April 8th as Judge James Ginocchi was unavailable today.

John McGowan is no stranger to readers on this site as well as those in Danbury who had to endure his racist antics towards immigrants the area. For those new to the site, here's a brief flashback of McGowan's more interesting moments:

Here's McGowan (in an Uncle Sam outfit) harassing marchers and desecrating a Mexican Flag during an immigrants rights march held on Main Street back in 2006.

McGowan, the former treasurer of the Greater Danbury chapter of the Connecticut Citizens for Immigration Control, co-founder/Vice President of Elise Marciano's United States Citizens for Immigration and Law Enforcement hate-group, and 2007 candidate for mayor, was charged with first degree sexual assault as a result of an investigation by the New Milford Police Department.

Here's the details on McGowan's alleged crime from the News-Times:

The case has gained quite a bit of attention not only because of the charges agaisnt McGowan, but also for the anti-immigrant activist's bizarre behavior in court.

Each time McGowan appeared in the case, he claimed the court did not have “jurisdiction” over him “as a natural man.” McGowan’s insistence in his “personal sovereignty” prompted Judge James Ginocchio to order a competency evaluation in September.

McGowan argued the court should dismiss the state’s case against him because it had no jurisdiction over him, but Assistant State’s Attorney Dawn Gallo argued McGowan’s claims were based on civil and federal law, not criminal law. Ginocchio agreed and denied McGowan’s motion.

Recognized as one top 10 crimes of 2009 by the Danbury News-Times, as well as highlighted several hate-group monitoring organization such as The the Southern Poverty Law Center, McGowan's case is scheduled to move towards to the jury selection phase, but given his bizarre antics in court to date, anything can happen.

Thus far, McGowan's laughable use of pseudolaw as a defense has not been a factor in the case, for the exception of slowing the pace of the trial. Hopefully, this situation will move forward towards a resolution sooner than later.

According to the CT Defense Lawyer website, a charge of first degree sexual assault is a CLASS B felony. If found guilty, the local bigot could be sentenced to 1 to 20 years in prison and fined up to 15,000 dollars.