posted by ctblogger at 7:52 PM 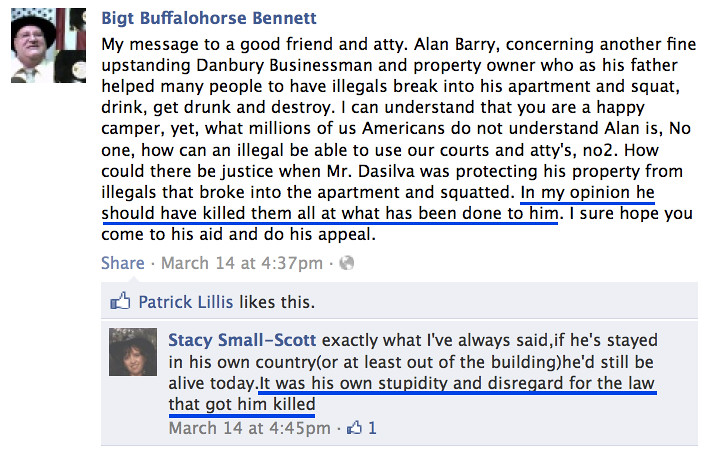 Glad to see that Tom Big(o)T Bennett and his ilk haven't missed a beat...

The above moronic comment from Danbury's finest is just a sample of the over-the-top racist comments that's spreading like wildfire throughout the city in response to the sentencing of Danbury landlord Joe DaSilva for causing the death of Ecuadorian immigrant Luis Encalada Bueno.

Since word of DaSilva's sentencing, the News-Times has been in overdrive scrubbing the vitriol from the xenophobes from their comments section

In response to the outlandish display of hate, the News-Times had this to say...

THUMBS DOWN to the insensitive and downright racist comments made in various forums -- most notably in online comments -- in response to the sentencing Wednesday of Danbury landlord Joseph DaSilva Jr., who has been sentenced to serve 18 months in prison for his role in the death of Ecuadorean immigrant Luis Encalada in November 2009. Encalada was found squatting on property owned by DaSilva, who physically threw the man down the stairs and inflicted fatal internal injuries. Justice is depicted as blindfolded, the judge told the courtroom at the sentencing, so that it is not swayed by wealth or standing -- or lack of either.

Hate-group co-founder desecrates Mexican flag a immigration rally
posted by ctblogger at 11:57 AM 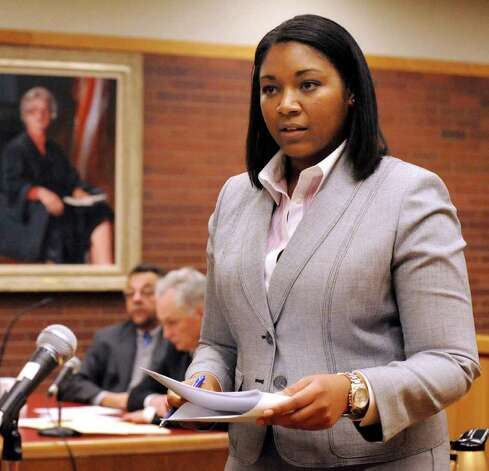 After Danbury landlord Joe DaSilva was sentenced to 18 months incarceration for causing the death of Ecuadorian immigrant Luis Encalada Bueno, I had a chance to speak to the prosecutor in the case, Assistant State's Attorney Sharmese Hodge, to get her take on the judge's decision.

For those who don't know, Hodge, a Western Connecticut State University alum who studied law at George Washington University has made quite a name for herself as a successful prosecutor in Greater Danubury. Hodge she was successful in several high profile cases in the area including the murder trial of business owner Zef Vulevic by Marash Gojcaj, and the child sex abuse trail against youth minister Troy Grant.

During the brief interview, Hodge responded to one of the concerns many people in the immigrant community had regarding the case, the reduction of charges against DaSilva as well as the judge's emphasis of DaSilva's lack of truthfulness to the police in the matter and how that impacted his case. At first, I planned to do a write-up on Hodge's remarks but decided later decided to just to post the audio from the interview so you can hear Hodge in her own words…