Dems pick Arconti for the 109th

Earlier today, Arconti issued a press release which included a transcript of his nomination acceptance speech:


Thank you Mr. Chairman, thank you to my friends and family here, and most importantly thank you delegates of the 109th district for choosing me as your nominee. I am proud and honored to accept your nomination as the Democratic candidate for State Representative from the 109th district. I would also like to especially thank Representative Joe Taborsak. Jay has been a great State Representative for our district as he has secured millions of dollars for Danbury from the State over his tenure. I look forward to picking up where Jay left off. I am honored and humbled that you have trusted me with that responsibility.

As many of you know, I come from a long line of successful public servants. I am excited to carry on my family’s tradition of serving our community. For those of you who may not know, I am a native Danburian, attended Danbury Public Schools and have a Public Health degree from Southern Connecticut State University. During my term, I look forward to advocating for increased access to affordable preventive healthcare, sponsoring efforts to bring more jobs to our city, and working with the State to make sure Danbury receives its fair share in education funding for our children.

I can’t express how excited I am about this campaign and introducing myself to the residents of the 109th district. This race is going to be a lot of hard work and I will need everyone in this room to help in any way that is possible. But I know that with your support, we can and will win in November and keep this seat “blue” in the Democratic column for the next two years maintaining the outstanding tradition of quality service to the people of this district and all of Danbury.

posted by ctblogger at 6:26 PM

As someone with a loved one who is dealing with cancer, words can not express the gratitude I have for Ann's Place in Greater Danbury.

For those who don't know, Ann's Place is an amazing cancer support group located on Saw Mill Road. They offer an wide array of support services free of charge and help you and your family cope with dealing with cancer (trust me folks, it isn't easy).

Today, State Rep. Joe Taborsak and House Speaker Chris Donovan announced that state funding for Ann's Place is set to voted upon during the next meeting of the state bond commission on June 4th. The 250,000 grant will go towards the construction of Ann's Place's new facility.

State Representative Joseph Taborsak (D-Danbury) and Speaker of the House Christopher G. Donovan (D-Meriden) announced that funding for Ann's Place Cancer Support Center is expected to be approved by the State Bond Commission when they meet June 4.

A $250,000 grant earmarked for the Center is on the Bond Commission's agenda released today. The grant will go toward the final phases of the construction of their new facility.

"This grant will allow Ann's Place to enhance and expand the wonderful work they undertake every day helping people in their battles with cancer," said Taborsak. "The Center is a godsend for thousands of individuals and families in the greater Danbury area."

Each month, Ann's Place serves more than 700 individuals (including family members) from over 14 Connecticut towns. All services, programs and materials are provided free of charge, and Ann's Place does not receive any third party payments.

"Ann's Place is a shining example of good-hearted people helping others when they are down," said Speaker Donovan. "Their longstanding record of serving their community is commendable and they are well deserving of this support from the state."

"This funding will help insure that Ann's Place is here for decades to come serving families in need of these critical cancer related services," said Rep. Bob Godfrey (D-Danbury).

The cost of Ann's Place new building and land is approximately $5.3 million, of which approximately $4.7 million has already been raised. Fundraising has been achieved through the donations of numerous individuals, foundations, and corporations. Much of the construction and materials for the home have been made possible by the volunteer efforts and donations from skilled craftsmen, contractors and others throughout Connecticut.

In the short time since I learned that State Representative Joe Taborsak was not running for re-election in the 109th District my family and I have spent hours in thoughtful consideration of whether I should run for the seat. This has been a difficult decision as I have long desired to represent the residents of the 109th district and Danbury in the State Legislature. However, this is not the right time to run for me and more importantly for my young children and wife particularly in light of my current military obligations and the financial strain of having to potentially resign my position as an Assistant Attorney General and Special Prosecutor. I will continue my service to the residents of Danbury on the City Council and truly appreciate the expressions of support I have received from so many people and hope they understand my decision not to run for the 109th District at this time.

BREAKING NEWS: Taborsak will not seek re-election for the 109th

With one day till the 109th Democratic convention, State Rep. Joe Taborsak announced today that he will not seek re-election.

It's rumored that the Democratic Town Committee have two candidates in mind to run for the seat (with one person being a MAJOR player in local politics here in Danbury.

Moments ago, I talked Taborsak to get his take on his run as State Rep and his future plans (which possibly include a run for mayor of Danbury).

I had the pleasure of following Taborsak's first campaign for state office in 2006 when local Republicans attempted to use the topic of illegal immigration to their advantage. Taborsask's departure from state politics will be a great loss to the 109th.

Last week, party insiders from the 5th District convened in Waterbury and endorsed Chris Donovan as their choice for Congress. The House Speaker won the nomination with 216 votes (64 percent) while two other Democrats were able to gather enough votes necessary to force a primary (Elizabeth Esty (66 votes/19 percent) and Dan Roberti (54 votes/16 percent)).

While much has been written about last week’s convention, here’s my video account of what transpired, including how the changes in the delegate votes made a difference in determining Roberti’s fate.

As with most political events, you can’t escape the pre-event rallies with volunteers showing support for their candidate. From free hot dogs from the Roberti camp (complete with constant reminders that he’s the “only candidate with a jobs plan”), and Esty volunteers franticly waving lawn signs, to hearing Donovan’s team chant “C-H-R-I-S, Donovan is the best” until it was beaten into my skull, each camp made did their best to make their presence known. 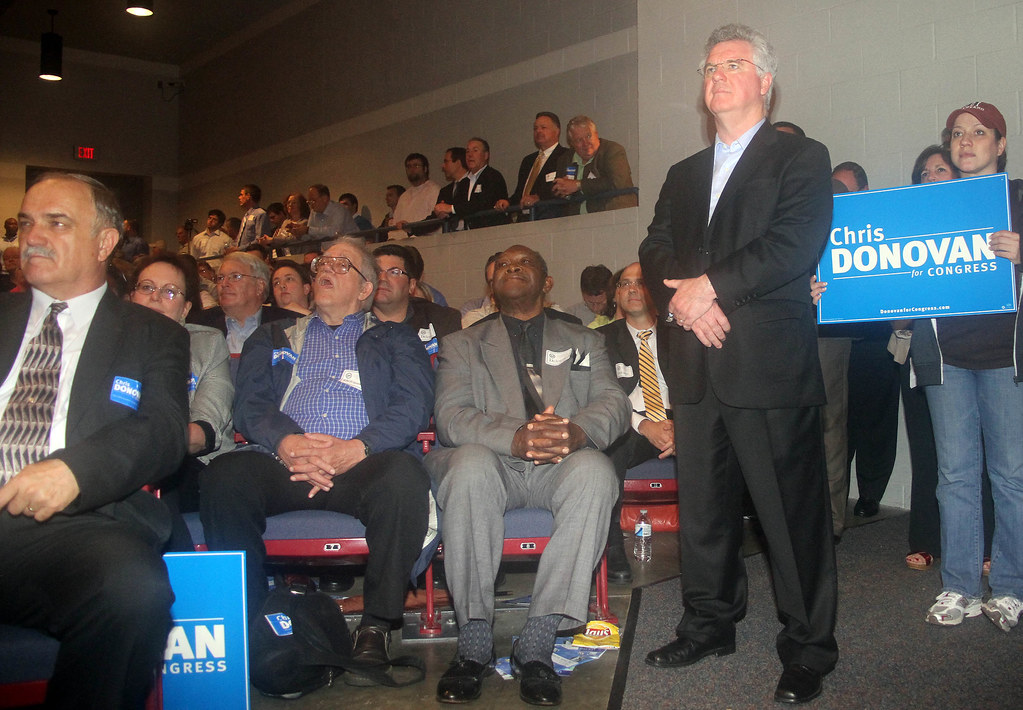 “We all believe in stronger education, affordable access to heath care, and equal rights and opportunities for every person. We need a Congressperson who will fight for our values in Washington, I deeply believe that Chris Donovan is the person for that job.” – Anna Maloney, nomination speaker for Chris Donovan.

The nomination speeches for Donovan (a total of five) centered on topics that I’m sure will be repeated throughout the primary season, his advocacy on educational maters, health care, rights of individuals, and his progressive record. 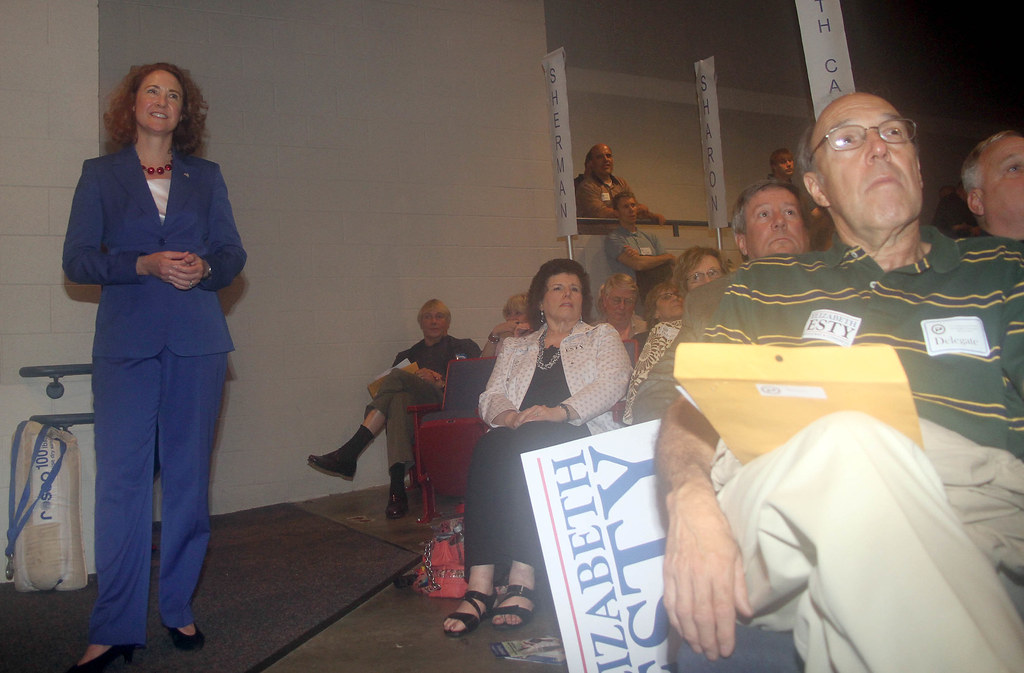 “We are facing a critical time in our country’s history, and a critical choice at this convention. We must the win the seat in November and we must nominate the Democrat that will swing the most unaffiliated voters in our direction, I believe that Elizabeth is that person. “Michael Long, nomination speaker for Elizabeth Esty.

The nomination speeches for Elizabeth Esty focused on stressing the candidate’s voting record while attempting to paint the State Rep as the only candidate who will attract unaffiliated voters. The message Esty supporters were trying to make was rather clear: Donovan is too far to the left to win in the general election in a district that's historically moderate. 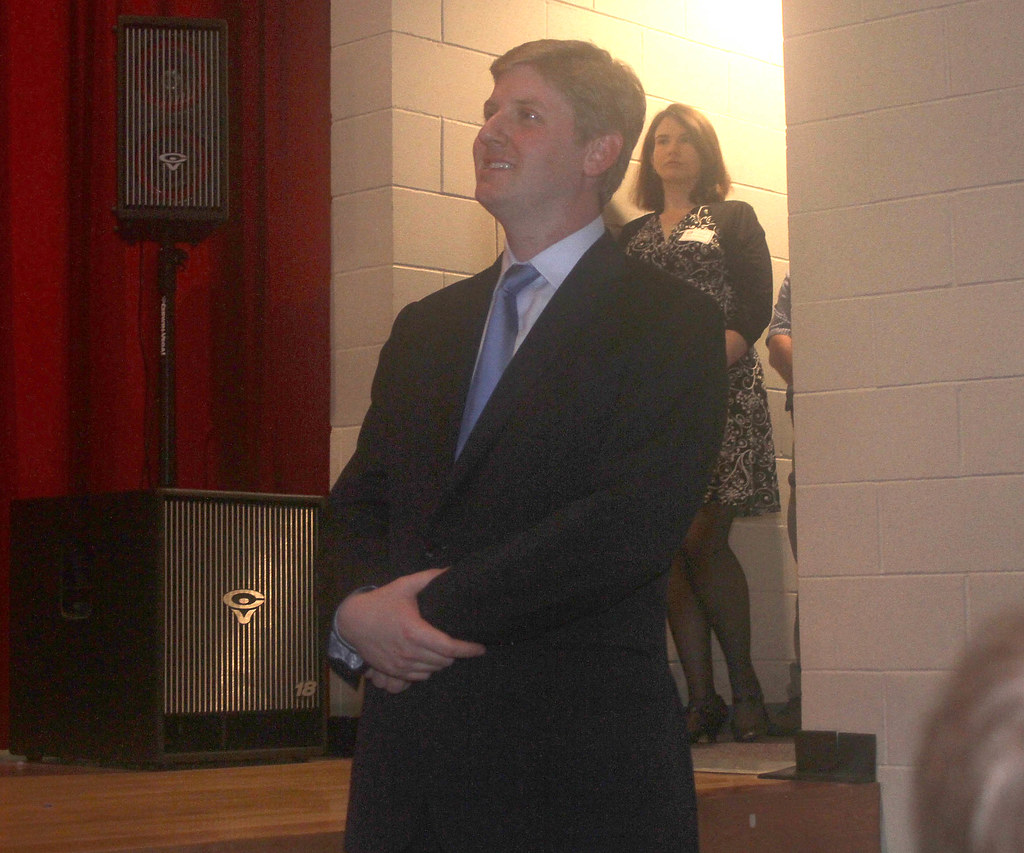 ”Whether he spent a year of his life with the homeless, or helping veterans who returned home from the Middle East, or on the ground during Hurricane Katrina helping with the relief efforts…I’m here to nominate Dan Roberti.” – Robert Fields, nomination speaker for Dan Roberti.

The nomination speeches for Dan Roberti primarily focused on his history of advocacy for people and well as his job creation plan.

Finally we have Randy Yale, a long shot candidate who was nominated by two delegates from the floor.

After the nomination speeches were out of the way, each of the municipalities that make up the 5th District were required to cast their ballots. For the inside political junkies, here’s the roll call breakdown (via Aldon Hynes).

After the roll call, delegates were allowed to change their votes…and here’s where things became interesting.

After Litchfield switched for Donovan, other municipalities switched for Roberti in order to secure the Kent Democrat his 15 percent needed to primary.


After the changes, here’s the final vote tally:

After the convention, I had a chance to speak to each of the candidates and get their take on the upcoming primary season.

Low point of the convention

While the convention was eventful, there were some low points…and this moment tops the list.

While Chris Donovan went to address the floor and give his nomination acceptance speech, some over-zealous volunteers for Roberti wanted to make their presence known by attempting to block Donovan from the cameras…

Hopefully after viewing this, Roberti (as well as Donovan and Esty) will reign in the craziness…it doesn’t look good (for the record, accusations were also made regarding certain people in Esty and Donovan’s camp, which I could not verify).

If the convention is any indication of things to come, it should be an interesting primary season.