UPDATE: To say that this story has gained state-wide attention would be an understatement. As of 5PM, this post has been read over 1,300 times and has been picked up by CTCapitolReport and will be featured on My Left Nutmeg tomorrow. Thanks for your readership...and more post on this God-awful candidate will be coming soon.

Since the News-Times only posted 109th State Rep GOP candidate Josh Stanley's tame Twitter post in the PRINTED edition of their newspaper (and to this date, restricted access to the full article online), here's a sample of Stanley's most outrageous misogynistic and racist online comments (WARNING: NSFW).
posted by ctblogger at 5:03 PM

UPDATE for the media: My appologies to reporters who were trying to contact me. All media inquires can be directed to me at ctblogger@yahoo.com.

Here's what Josh Stanley said to the News-Times about his LONG history of racist and highly misogynistic Twitter posts.

I never would have expected myself to be in this positon where I would actually have to filter my thoughts..."

Filter your thoughts...so in other words, you never thought you would be in a posisiton where you couldn't express your TRUE feelings...classy.

Stanley, who was encouraged to run by his mother, Colleen Stanley, a member of the City Council, and Boughton, a seven term mayor, said he knew enough to go to his Twitter account to remove offensive posts as soon as he was nominated in May.

"I knew my stance on the social media aspect had to change," he said during an interview Tuesday night, before he cancelled his Twitter account. "I knew I could not be this person and run for office, so I took down stuff that was inappropriate."

Really Josh, you seriously thought about your tweets when you thought about running for office...well can he expalin this tweet that was done days before he was nominated? 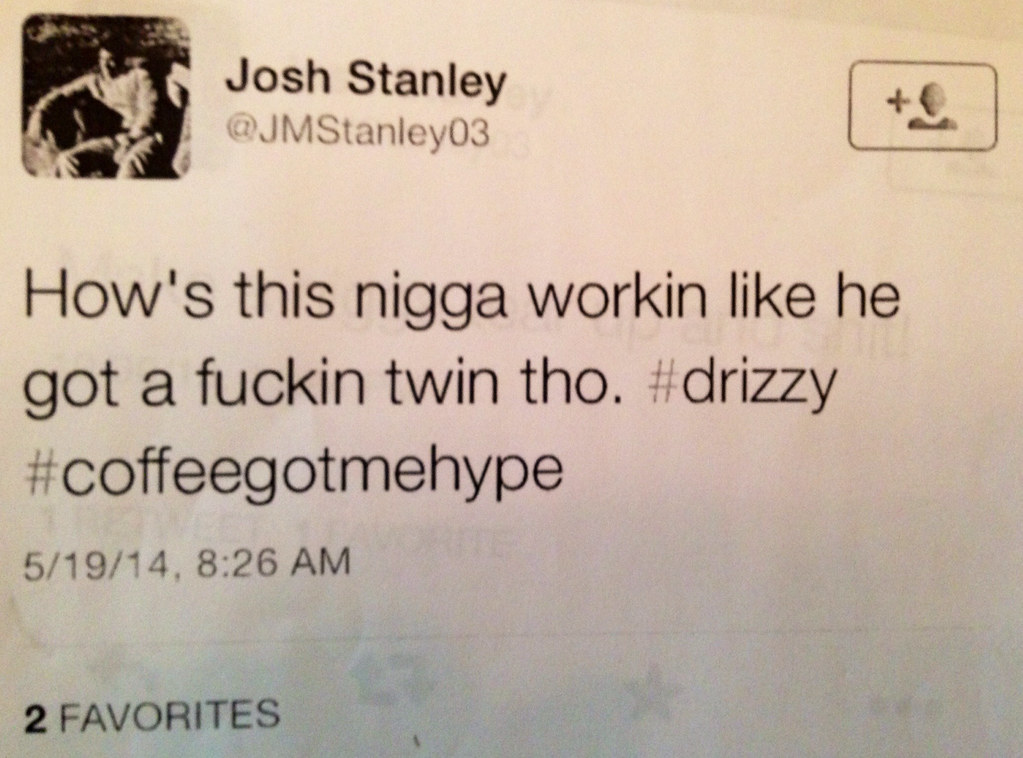 There is MUCH more to come...prepare to be more outraged!

For the sake of his family and his family's paving business, Josh Stanley should step down as a candidate for State Rep in the 109th district before there is a full protest outside of American Paving Specialists LLC, on Cross Street.

I have the Twitter posts and there is NO WAY this clown should had EVER been considered a candidate for any office...makes you wonder if there is anyone in charge of vetting candidates over at the Danbury RTC or if their crop of candidates were so weak that they had no other choice but nominate this extremist.

These racist and disgusting posts were known to many since Josh's Twitter account (JMStanley03) had many followers.

There is NO WAY members of Josh's family (including his mother City Council member Coleen Stanley) did not know that these tweets exist...and Josh can try and delete his Tweets and scrub his Twitter account but trust me, he's WAY too late!

The News-Times only posted the tame posts...the full ugly will be seen soon...prepare to be outraged!

posted by ctblogger at 9:54 AM

On Sunday, I paid a visit to the Bethel Democratic Town Committee picnic and caught up with First Selectman Matt Knickerbocker.

In the following video clip, First Selectman Knickbocker gave his thoughts on the eventual passage of the town's budget as well as the impact misinformation and low voter turnout had on the budget referendum failures.

posted by ctblogger at 3:29 PM